Implemented under the support of Nepal’s four donor partners, the Rights, Democracy, Inclusion Fund (RDIF) has helped transform a large spectrum of Nepalese society in its just over seven years. Designed in 2006 for supporting peace building and smoo 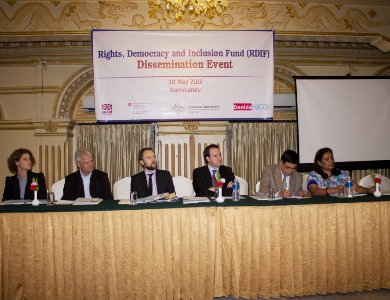 Ram Kumari Das, a Dalit women activist from Dodhana VDC, Siraha, in southeast Nepal, had never imagined that a small project would bring drastic changes in the social structure of backward rural communities of terai.

“I cannot explain the transformation the project brought to our society. After this project came to operation, Dalits and women of the project areas have felt empowered and about 50 percent cases of caste and gender-based discrimination, violence against women and untouchability related problems have decreased,” said Das.

Sixteen-year old Bhavana Pariyar of Dang saw more drastic transformation in her society. “My experience is that the program offered me an opportunity to acquire knowledge about human rights and develop critical thinking. We were informed about rights and responsibilities of children and existing social discriminations. It helped children to be more responsible for positive changes in the society,” said Pariyar.

Dudhkala Bista, 25, Bhagshwor VDC-5, Achham, sees liberation in the village following making her Village as Chaupadi eradicated areas.  “Our struggle against Chhaupadi paid when the ward committee formed in our village and declared it as chhaupadi-free ward in November 2012. All nine wards of the VDC followed our path and the whole Bhageshwor VDC was declared as the first chhaupadi-free VDC of Far-western region in Jan 2013,” said Bista, a widow attending the closing the project.

Although the social transformation process remains slow, people of three backward regions have seen this happen in just over seven years. The testimony given by three participants of three different regions spoke volumes about the changes.

The Rights, Democracy, Inclusion Fund (RDIF) was designed in 2006 for supporting peace building and for a smooth transition to democracy in Nepal. Four bilateral donors supported the program that  focused on enhancing rights, democracy and inclusion at the community level. RDIF was also an innovation in terms of funding mechanism as it involved a pool of funds contributed by four bilateral donors.

The first phase of RDIF ended in 2008; the second phase at the end of 2012. During this period RDIF worked with 88 civil society organizations. The  program disbursed £6.8 million for grants in six years. RDIF-supported project activities were carried out in all districts across the country.

“The government of Nepal recognizes the contribution made by RDIF in deepening democracy, inclusion and gender issue at the grass root level,” said Upendra Adhikary, joint secretary of Ministry of Women, Children and Social Welfare.

RDIF Phase I engaged with national networks and organizations for ensuring a speedy rollout, RDIF Phase II focused on consolidation of the initial efforts by shifting focus on district and regional CSOs.

"The experiences of RDIF show that transformation and change is possible only through the mobilization of local community. Nepal government will continue this program,"  said Adhikari.

Energy That Transforms By Keshab Poudel 21 hours, 29 minutes ago

Five Years After Promulgation Of Seventh Constitution By A Correspondent 2 days, 7 hours ago