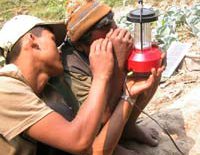 If there is an appropriate technology, there is a way out of poverty. This is what Practical Action has shown in Nurpang Village of Bhulichowk VDC of Gorkha District. Under its support, the villagers are now getting electricity from solar power.

Among many people living below the absolute poverty line, Lukman Praja, a chepang farmer residing in Bhumlichowk VDC of Gorkha district, is has a reason to rejoice.  After installing electricity lines, everything has changed in the village, including the literacy rate. As an indigenous ethnic community with lowest level of literacy, the villagers have seen a drastic rise in the literacy rate.

For Nurpang village, the supply of electricity is a boon now as school-going children can read till night. In many villages like Nurpang, where there is no possibility of getting  electricity from the national grid and micro-hydro, the solar and wind power will be the only way out. For a village of five households, micro-hydro is too costly for Nurpang. To solve this problem several technological options were considered and a wind & solar hybrid panel was installed.

Earlier, villagers remained skeptical about the scheme. When it started to generate the electricity, people are happy. Practical Action choose this system because it is affordable and sustainable for these villages.

According to Poor People's Energy Outlook 2013, energy is an enabler. It improves the quality of existing services and paves the way for new services to be made accessible to poor people.

Through its renewable energy program, Practical Action has already brought the change in the livelihood of many people. "Providing subsidy for renewable energy is not a long term solution. What is important is appropriate technology with ownership of local people," said Malla.

After the installation, the villagers experienced a better quality of life. Children began to study in a better environment and the household sanitation improved. Working in the kitchen was not troublesome for Lukman's wife anymore, as she does not have to use a wick lamp. As a result, the overall health of the village also improved.

Along with Nurpang Village, Practical Action has established an "Energy Village" demonstrating how renewable energy, micro hydro, solar and wind can make an enormous benefit to income generation and local development without increasing carbon dioxide emissions.

Energy is key to eradicate poverty. Nepal's 13 National Plan also stresses the need to improve the overall energy situation in the country. Practical Action's experiences have also shown that the provision of energy is critical to help people escape poverty.

Working in various parts of Nepal, Practical Action showed that renewable energy technologies offer clean and sustainable options for generating energy. "When owned and managed in the right way they can make a dramatic contribution to poverty reduction," says Practical Action's website.

With over 40 percent of population without electricity and large number of population relying on traditional energy sources for cooking, the majority of the population in rural Nepal still does not have access to basic energy services.

As there is a rampant poverty, they cannot afford commercial fuels such as LPG gas or kerosene. Realizing this, Practical Action has been promoting renewable energy in the places where natural resources such as the sun, wind and water provide potential sources of renewable energy.

Communities generally lack (in addition to the initial funds) the information, knowledge and expertise needed to make decisions about the most appropriate systems and their installation.

Practical Action's Renewable Energy Village in a Chepang Village in Gorhka district has meant that 67 households now have access to lighting from renewable energy sources. These sources include wind/solar hybrid, micro-hydro, pico-hydro and solar lanterns. Chepang village has shown that energy increases income and build capacities of poor Chepangs in development and management of infrastructure facilities.