Political Leaders Reflect: ICPD+20 and Beyond in South Asia 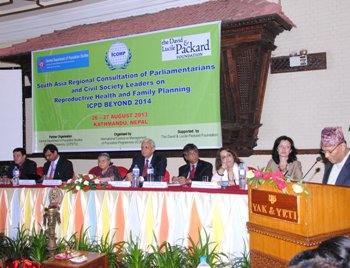 Kathmandu/Aug 26:” Why do we still have so many women die while giving birth? Why infants and children in large numbers still die despite advances in health systems? Why women are discriminated and bear the indignities of violence and abuse? Why a girl child, in some cases, is simply denied birth? Why most young people are denied access to basic information & services?” are some questions that Dr. Wasim Zaman posed to the political and civil society leaders at the outset of the two-day SAARC level regional meeting here in Kathmandu. Political leaders from the SAARC member countries, represented by senior ministers, MPs and Members of Legislative Assemblies, together with key civil society bodies met today, 26 August 2013, in Kathmandu/Nepal for a two days regional consultation in reflecting on and taking stock of Reproductive Health and Family Planning issues in the region, especially as these issues evolved in the last twenty years after the Program of Action (PoA) of the International Conference on Population & Development (ICPD) was adopted in 1994 in Cairo.

This South Asia regional meeting is attended by representatives from all the SAARC countries, which is poised to carry the voices of the civil society to the UNGAS special session planned in Sept 2014. The special session of UNGAS next year in New York would mark the completion of 20 years of the ICPD (International Conference on Population & Development).

The UN International Conference on Population and Development (ICPD) was a strategic turning point in the way we approach population issues. It firmly placed the needs and rights of the individual at the heart of development policies and programs and envisioned a world where all people – women and men, young and old – enjoy equal opportunities and freedom to make choices and pursue their own life aspirations. It particularly created space for rights-based framework in reproductive health and family planning information & services, including gender equity & equality, for all people especially hard-to-reach, socially excluded and vulnerable groups.

The regional consultation (26-27 August, 2013), with the support of the David & Lucile Packard Foundation and in close collaboration with the CDPS/Nepal (Central Department of Population Studies), is organized by the ICOMP (International Council on Management of Population Programs). This consultative process is aimed to providing a forum for dialogue amongst parliamentarians and civil society leaders as well as other development partners from the sub-region on new or emerging challenges and opportunities in implementation of the ICPD POA, the outcome of which will feed towards the ICPD Beyond 2014 review process.

Speaking on the occasion, the chief guest Vidyadhar Mallik, Minister for Health & Population, Govt. of Nepal said, “Nepal’s maternal mortality has steeply declined; improvements in maternal care services; increase in number of women seeking assistance of skilled birth attendants, and expansion of safe abortion services are some of the key reasons for considerable decline in the maternal mortality”. Minister further emphasized, “family planning situation has stagnated in Nepal in the past decade. Half of the Nepalese women do not use a contraceptive method; whereas unmet need for family planning has increased and is quite high when compared to other South Asian countries”. He also underlined the importance of responding to the unique needs of young people.

During the opening ceremony, Gowher Rizvi, Minister and Adviser to the Prime Minister of Bangladesh on Foreign Affairs, said “South Asia as a region will indeed define this century’s agenda. Our region cannot be ignored, it looms large”. Rizvi, while recalling the Cairo Conference, said “Much has happened since 1994; it is a story of successes and also frustrations. Civil Society has a pivotal role to play and act as a catalytic change agent. But unfortunately, full potential of civil society has not been tapped in our region”.

During the opening ceremony held today in Kathmandu, Dr. Wasim Zaman, ICOMP Executive Director emphasized the need for a renewed political commitment by the SAARC member nations and said, “In Asia and the Pacific region, South Asia lagged behind in achieving the ICPD goals. Progress has been slow compounded by challenges and gaps. Therefore, it is essential that the voices of South Asian NGOs and civil society leaders be heard in all the important meetings for action”.

As the 20-year deadline for achieving the ICPD goals approaches, a global review of the state of population and development is underway. The review will assess achievements made since Cairo and identify outstanding issues and new challenges. It will serve to renew political support for the Programme of Action, which has been extended beyond 2014 by the UN General Assembly, and will inform the post-2015 development agenda.

As part of this process, the 6th Asian and Pacific Population Conference (APPC) will be convened by the UN Economic and Social Commission for Asia Pacific, in cooperation with the United Nations Population Fund (UNFPA), from 16 to 20 September 2013 in Bangkok.  The Conference will serve as an intergovernmental platform for the Asia-Pacific preparations for the special session of the General Assembly on the International Conference on Population and Development Beyond 2014. Therefore, the on-going SAARC level regional consultation here in Kathmandu will prepare substantive ground for the SAARC countries in assisting them dialogue, reflect, synthesize and articulate the achievements, gaps, missing-links and lessons gathered under the Population Programs since 1994.

Nepal Extends Lockdown Until June 14 And Suspended All Flights Till June 30 By NEW SPOTLIGHT ONLINE 1 day, 5 hours ago

More Than Half A Million Nepali Foreign Migrant Workers Registered For Repatriation By NEW SPOTLIGHT ONLINE 1 day, 18 hours ago