There Will be Election

Even as there is a growing uncertainty over the November elections 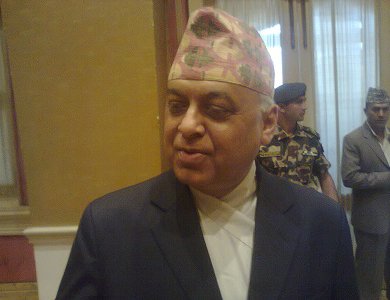 Even as there is a growing uncertainty over the November elections, Home and Foreign Minister Madhav Prasad Ghimire is going ahead preparing for the polls firmly. Ghimire spoke to NEW SPOTLIGHT about current scenario at an interaction during Nepal-Europe Symposium. Excerpts:

How do you assess the possibility of holding the elections on November 19?

There is no way other than to hold the elections on November 19. The government is committed to holding the elections in a free and fair manner on the stipulated date.

As CPN-Maoist led 33-party alliance and other fringe parties have made it clear that they will take necessary actions to prevent the elections, how can you ensure free and fair elections?

Since the negotiation is still going on, I don't think such a scenario will appear. Given the present statement, all parties including Vaidya’s will join the elections. There is still time for that.

How do you view the preparation of the government?

Only one task of this government is to hold the free and fair elections. This is our duty and the government is working to fulfill this. We are on a bull’s eye. We have been supporting the Election Commission to make the elections possible.

Will the government go for negotiations, if necessary?

As some armed groups in terai have already threatened to use all necessary steps to disturb the law and other situation, how do you see the security preparation for the elections?

So far as the law and order is concerned, it is in good shape. Our security can handle all kinds of threat. We know that no political force has the strength to disrupt the poll given the commitment of major four political parties and people's enthusiasm; no one can disrupt the poll.

Don't you think, along with the Maoists, armed groups can create some problems?

The Ministry of Home is preparing an integrated security plan for the coming election. The current strength of Nepal Police and Armed Police is enough to thwart any effort by groups to disturb elections.

Why do you have so much confidence?

As the Election Commission has already completed several stages and it is in the final stage of preparation and political parties have already launched their campaigns, there is an election fever gripping the country. In this situation, elections will be held on November 19.

How do you assure voters that the elections will be peaceful?

After consultation with the Election Commission, the Ministry of Home is preparing an integrated security plan to provide the much-needed security to the voters and to cast their votes. As I have already mentioned, the government is committed to holding the elections in a peaceful manner.