ALL AGAINST CHILD MARRIAGE: A Religious Call 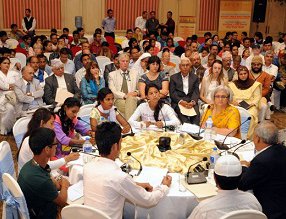 Although Nepalese political leaders failed to agree on a round table conference to settle the political issues, the Nepalese religious leaders have made a politically impossible roundtable meeting possible on the agenda against child marriage.

They not only successfully conducted the roundtable meeting, but also drew the conclusion that religious leaders can play an important role to prevent child marriage in the country.

Organized by UNICEF, and UNFPA in collaboration with National Interreligious Network, the roundtable discussions were moderated by Rupa Dixit Joshi from UNICEF. Participated in by children from various parts of Nepal and religious leaders of various faiths replied to the queries of the children. Although children posed very difficult questions, the program went successfully thanks to a careful handling by Joshi.

According to the report, African countries are in the front run with a high prevalence of child marriage where Niger, Chad, Mali, Bangladesh, Guinea, Central African Republic, Mozambique and Nepal runs from first position to the eight spontaneously.

Similarly, excerpting the findings from Nepal Health Demographic Survey (NDHS-2011), the event highlighted that 55 percent women aged 25-49 were married by the age of 18 in 2011 making the country second highest after Bangladesh where it is 66 per cent.

“There are 27 child marriages happening in the world, every minute. In Nepal, 11 percent of the population below 14 and 29 percent of girls aged 15-19 are married. Some 7 percent of boys are married before they turn 18,” said Hanaa Singer, representative, UNICEF-Nepal. “This goes against all the conventions of human rights and international treaties which directly or indirectly forbid the degrading and mistreatment of girls inherent in child marriage.”

Said Singer: “I firmly believe that religious leaders like you all shape social values and promote responsible behaviors that respect the dignity and sanctity of all life.”

Deputy representative of UNFPA Catherine Breen Kamkong stressed the need to wipe out child marriage which is creating a lot of problems in reproductive health process. “Religion can play an important role in sexual and reproductive health,” said Catherine.

Delivering the statement, Norwegian ambassador to Nepal Alf Arne Ramslien said the commitment expressed by leaders of different religious faith is a matter of great importance to eradicate child marriage.

Binod Chaudhary Distributes Large Quantities Of PPE And Other Protective Materials To Hospitals In Nepal By NEW SPOTLIGHT ONLINE 2 days, 23 hours ago