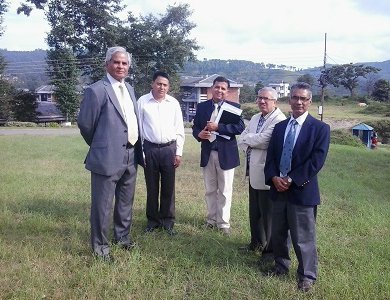 The discussion was attended by members of the School of Law Steering Committee, senior officials from Kathmandu University, former KU Vice Chancellor, former Chief Justice of the Supreme Court of Nepal, law advocates and staff members from NCF as well as ASD. The chief speaker of the program was Professor Dr. M.P. Singh, a leading constitutional expert of India and the former Dean of Law Faculty at Delhi University.

Following a welcome note by Dr Bipin Adhikari, the Coordinator of KU School of Law Steering Committee, the program was initiated through Dr. Suresh Raj Sharma’s brief introduction about the formation and evolution of Kathmandu University from the day of its inception, till its current status, and the establishment of the School of Law. It was followed by Dr. M.P. Singh’s presentation on the “prospects and challenges” of forming a Law School at Kathmandu University. Subsequently, a discussion was held with the members involved raising concerns and seeking Dr Singh’s expertise.

In his introduction, Dr. Sharma began with concept of Law and Democracy as intrinsically linked entities. He remarked; “there cannot be democracy without the rule of law.” Similarly, he followed highlighting the importance of law in other spheres of societal design such as politics, economics, environment, geography etc. According to him, the prospect of law as a discipline has not gained adequate advancement citing various reasons such as social stigma associated with lawyers, misconception regarding the role of law in creating and sustaining society etc. Despite its popularity as a profession, law schools are still not up to the mark in Nepal. As a result, law as an academic discipline couldn’t prosper here.

Dr. Sharma’s introduction was followed by the presentation of Dr. M.P. Singh regarding the “prospects and challenges” of forming a School of Law at Kathmandu University. Dr. Singh started the presentation outlining the object of legal education. According to him, the main object of legal education is to identify law as organizing principle of modern society. This principle operates at two levels: Primary: Developing the vision of society to be realized through law. Secondary: Dispute Resolution Mechanism.

Affirming H. Sharma’s views, Dr. Singh promoted interdisciplinary approach and argued that such a system would provide impetus for interacting faculties to develop and prosper. Subsequently, issue of acquiring qualified faculty members was raised by Professor Sanjay Nath Khanal, who heads Accreditation Office of KU citing the prevalent problem of people preferring professions over academics. Similarly, on the issue of providing electives, he highlighted that it would not be possible to start providing with a diverse array of electives from the start. Rather, a gradually growing approach was mooted with a view to incorporate an interdisciplinary approach. Similarly, the difficulties involved with scouting a diverse population were discussed.

Sitaram Adhikary, the former registrar of KU, highlighted the difficulties inherent in implementing an all inclusive system drawing from past experiences in KU medical school. Lastly, the issue of self-sustainability was raised. Adhikary also advocated the idea of research as one of the answers to combating financial compatibility in order to achieve self sustainability.

Also, Dr Surya Dhungel brought forward the challenges in maintaining the standards of the institution in light of losing quality faculty members.

In conclusion, Dr. Singh suggested higher fees and providing research as a way to combat financial issues. Drawing on Indian context, he highlighted the provisions of banks providing loans for students to pursue education on the basis of recommendation by universities. In terms of student inclusiveness, Dr. Singh highlighted the constitutional support as one of the main reasons in its success. Lastly, Dr. Singh suggested a need for a system that would help attract and retain quality faculty through steps such as higher salary, incentive packages, providing certain freedoms to teachers etc.

The programme was concluded by Dr Bipin Adhikari thanking Dr Singh and other participants for taking time to take part in the discussion.