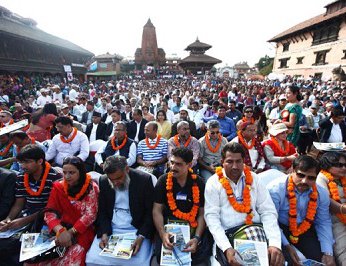 When I visited the Bhaktapur city in the mid-1980s, it was the dirtiest of cities in valley. It was difficult to walk because of the dirt, human waste and other garbage lying here and there. That’s how a post reads on a social network.

Fast forward 30 years: Not only the city, Bhaktapur area as a whole has been declared Open Defecation Free by president Dr. Ram Baran Yadav, writes Ashutosh Tiwari on his Facebook wall.

This is the change Nepal has achieved in the sanitation sector. Although Ashutosh wrote his impression comparing the state of sanitation of the district in the last 30 years, others too have similar impressions about Bhaktapur.

Although Nepal is yet to have one hundred percent coverage in sanitation, the progress made by Nepal is impressive. When President Dr. Ram Baran Yadav was inaugurating  the fifth South Asian Conference on Sanitation (SACOSAN-V) with the presence of national, regional and international experts and local people,  there was a sense of satisfaction in the face of people living in Bhaktapur.

“I am proud to say that people of Bhaktapur glorified the nation. Of course, urban sanitation is a big challenge. Being a medical doctor, I know the importance of sanitation. Sanitation movement will help us to combat water borne diseases,” said president Dr. Yadav. Addressing the inaugural program, president Dr.Yadav said: “Constitution of Nepal has guaranteed the right to live in a safer environment to its citizens and sanitation journey in Nepal is one of the steps to ensuring rights given by constitution. Sanitation programs in Nepal were going forward as a movement. Efforts done by Bhaktapur District declaring the District ODF is an example of glory for the nation. Investment on sanitation is an important step to save lives of children.”

As the host to regional conference SACOSAN-V, Nepal has made a great stride in sanitation. “The national census of 2011 showed the sanitation coverage was 62 percent but we have reached approximately 75 percent coverage now,” said minister for Urban Development Chhabi Raj Panta. “We have been receiving an all out support from Civil Society organizations and Nepal’s development partners to achieve the goal to provide sanitation to all.”

Nepal has made a lot of progress. According to Ministry of Urban Development, as of September 2013, 1030 VDCs out of the total 3915, along with 12 out of 58 Municipalities and nine of 75 districts have been declared as Open Defecation Free (ODF).

“As South Asian countries are facing similar challenges, SACOSAN conference will help to identify common problems and find the way to address it,” said Kishor Thapa, Secretary, Ministry of Urban Development. “With the support from Nepal’s development partners and civil society organizations, Nepal has made many gains in sanitation in the last few years and we are proud to share our own achievements.”

In the presence of a high level delegation from South Asia and civil society leaders and local people Abadh Kishore Mishra, Joint Secretary, Ministry of Urban Development, said that the government’s plan is to declare Nepal as a country of open defecation free by 2020.

On behalf of Civil Society Organization Ms Lajana Manandhar said,“Celebration of ODF is a result of community’s continuous effort that inspired people advocating for better sanitation.”

Although South Asian countries have made enormous progress in the sanitation, they are still lagging behind others. Over 40 percent population in the region still relies on open defecation. Government officials and civil society leaders accepted the fact that just achieving high economic growth does not necessarily help to increase sanitation coverage.

“Despite high level political commitments and growing investments, South Asia is in a huge sanitation crisis. Millions of children are dying due to diahhoria and other water borne diseases. It is unfortunate that sanitation progress often does not benefit the poorest. Investment in sanitation is not commensurate with the results on grounds, particularly due to lack of accountability,” said Ramisetty Murali, regional convener of the Fresh Water Action Network South Asia.

The three day conference discussed and debated various strategies, ways and policies formulated by all eight member states to increase the coverage of sanitation. Each country presented its country paper and development partners and civil society organizations got involved in the conference through various side events.

“SACOSAN-V is a big milestone and exciting because the eight countries cross learned, shared and tracked their progress,” said Tanya Khan, National coordinator of the WSCC Pakistan. “The venue of inauguration was important as the place has been declared ODF on the same day.”

As the fifth South Asian Conference on Sanitation (SACOSAN V, 22-24 October 2013) kicked off in Kathmandu, Nepal, leading civil society groups called on their governments to recognize the urgency of the South Asian sanitation crisis and set robust plans to achieve universal access to improved sanitation toilets and ending open defecation by 2020.

Four hundred delegates and speakers, including renowned experts and practitioners from the eight SAARC countries attended the ministerial conference where civil society representatives and community leaders shared the views of thousands of people living with the reality of unsafe sanitation and calling governments to deliver on commitments made during SACOSAN IV in Colombo, Sri Lanka, in 2011.

They called for programs in line with the spirit of the UN General Assembly resolution and SACOSAN IV commitments, to recognize access to sanitation as a legally enforceable right.

The civil society leaders stressed that these time bound plans must be accompanied by comprehensive monitoring and evaluation plans; a sub-plan approach should be adopted by respective governments to ensure access to improved toilets for the poor and marginalized communities. The civil society leaders also called on service providers to ensure toilets are accessible to everyone including people living with disabilities.

All school infrastructure development plans and designs, budgets for operation and maintenance, reporting and monitoring systems should integrate uneven progress on previous SACOSAN commitments. Despite high level commitments made during SACOSAN  IV, there are still a billion people living without access to adequate toilets in South Asia.

Progress on sanitation is not reaching the poorest - Not only are current rates of progress on sanitation and hygiene too low in South Asia, much of the progress is not reaching the poorest. The current set of MDGs focus on average progress measured at country and global levels. These averages hide different inequalities, such as a rural - urban divide, exclusion of people living with disabilities and other marginalized groups.

Holistic plans are needed to tackle increasing urbanization -Each country is facing the challenge of increasing urbanization and must develop integrated plans that include the necessary policies, resourcing, technology and education. Here again, governments must ensure that these plans cater to the needs of the poorest and most marginalized. In addition, these plans must focus on sustainable management of human excreta and solid waste.

FAN South Asia Convener Ramisetty Murali said, “It is high time that the governments of South Asia make an honest effort to implement past SACOSAN commitments to save the lives of millions of children dying from sanitation and hygiene related diseases and to improve the quality of life and livelihoods of the poor and most marginalized.”

Starting in Bangladesh in 2003, SACOSAN is held every two years on a rotational basis in one of the South Asian countries. As a common platform for participating nations to discuss problems and explore solutions to achieve complete sanitation status, this conference is expected to accelerate the momentum of sanitation in this region.

Joint Secretary and Spokesperson of the MoUD Suresh Prakash Acharya described the SACOSAN-V a grand success.

NEPAL-INDIA Bonds Across Border By Keshab Poudel 1 day, 1 hour ago

India Open To Engaging With Nepal In An Environment Of Trust And Confidence: MEA Spokesperson By NEW SPOTLIGHT ONLINE 2 days, 12 hours ago