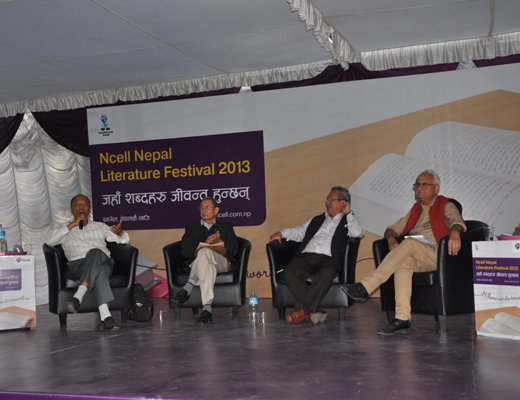 The third day of the Ncell Nepal Literature Festival 2013 provided the audience with an extraordinary amalgamation of conversations and discussions on various topics in nine unique panel discussions. The event was attended by a huge number of readers, authors, thinkers and literature enthusiasts.

In the first session of the day, the hugely popular celebrity duo, the "Maha Jodi", invited the audience to hear about the ups and downs of their personal and professional alliance. The discussion moderated by popular TV host Bijay Kumar received several rounds of warm applause, as the audience identified with the presenters' laughter, became emotional and delved deep into the secret behind the duo's decades-strong partnership.

In the second session of the day, two simultaneous panel discussions were held over "Rastriyatako Punparibhasa" discussed by CK Lal, Pratyush Onta and Dambar Chemjong. Bishnu Sapkota moderated the session, which focused on the contemporary issues afflicting the country, and the potential way out. Meanwhile, journalist Prateebha Tuladhar held a discussion with versatile Indian author, poet, filmmaker; journalist Annie Zaidi on "Talking Love", where the duo discussed about the motives for and techniques of writing, especially writing on love.

According to a press release, following the discussion, bestselling Indian author Ravinder Singh reemerged in a conversation with Actor Nisha Adhikari on "I too had a love Story", also the title of his first novel. Meanwhile, in the simultaneous discussion held at Dabali, Poets Bikram Subba, Saraswati Pratikshya and Tulasi Diwas held a discourse over the topic "Bartaman Kabitako Anuhar". The session moderated by Heman Yatri dwelled upon the contemporary facet of the genre of poetry in the context of Nepal.

The fourth discussion veered off the regular topics, with an intense discussion on the "Vision for a Translation Campaign" among Basanta Thapa, Viktor Pradhan and Balkrishna Bal. In the session moderated by Kanak Dixit, the panelists reached the conclusion that the culture of translation was progressing at a rapid pace, but required extensive care and nurture. In the simultaneous discussion held at the Dabali, British Author Ned Beauman, Bangaldeshi Author Farah Ghuznavi and Author Prajwal Parajuly debated upon "The Empire Writes Back", where they conversed on the issues of postcolonial literature.

The final and one of the best-attended sessions was the conversation between outspoken Author Shobhaa De and Sophia Tamot, who mulled on "Writing-A Strange Obsession". Both the speakers emphasized on writing being a lifelong passion and vocation. The audience also obtained an exotic taste with the final session held at the Dabali, where Shayars Abdul Latif Shauf and Abdul Wahid put forth their shayaris for the appreciative crowd. It ended with the audience asking for more of the soulful lines.

The Ncell Nepal Literature Festival, which will conclude on October 28, is being attended by 8 international and over 100 national authors. The number of visitors is expected to exceed 5,000.

Nepal Is Working With India To Resolve Kalapani Issue By NEW SPOTLIGHT ONLINE 1 day, 5 hours ago