UNFPA’s state of World Population Report highlights a grim scenario for teenage pregnancies as 7.3 million girls under 18 give birth in developing countries every year 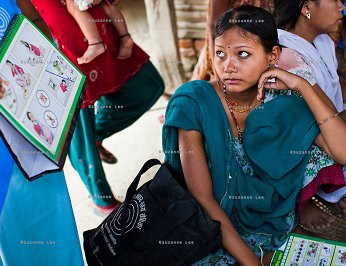 At a time when UNFPA released its annual World Population Report, Menuka Thapa, 17, living in Slum of Bagmati gave birth to a child. Thapa is not alone. Hundreds of Nepal’s teen girls living under poverty have been passing though a similar bleak scenario.

“About 1 in 5 girls aged 15 to 19 in Nepal are mothers or pregnant. Yet the vast majority doesn’t use contraceptives (86% of married adolescents aged 15-19) and have the highest unmet need for family planning (about 42%, highest in South Asia). Hence the risks of a child giving birth to a child are very high.  More programs are needed to help them delay the first pregnancy and space subsequent pregnancies. These programs should promote access to and utilization of modern contraceptives,” said Ms. Giulia Vallese, UNFPA Representative to Nepal.

Given that adolescent pregnancies are of particular concern among rural and uneducated adolescent girls, more efforts are needed to increase access to adolescent- and youth-friendly services. Such services need to be delivered in a sensitive, confidential, non-judgmental, and non-discriminatory way, regardless of marital status. They should include sexual and reproductive health and HIV information and services, including contraception, prevention and treatment of STIs and HIV and maternal health services, regardless of marital status.

Recent research has suggested that teen pregnancies in the developing world are declining, but more than 7 million girls under the age of 18 are still giving birth each year and suffering drastic consequences.

The U.N. Population Fund expressed particular alarm about the dangers facing girls 14 or younger, who account for 2 million of the 7.3 million births to women under 18 in developing countries. This group faces the gravest long-term social and health consequences from giving birth as teens.

“A girl who is pregnant at 14 is a girl whose rights have been violated and whose future is derailed,” the fund’s executive director, Dr. Babatunde Osotimehin, said in London.

The report looked at births to women under 18 worldwide, the underlying causes of teen pregnancy, and possible solutions to the problem, which the U.N. said is part of a vicious cycle of rights violations.

“Adolescent pregnancy is most often not the result of a deliberate choice, but rather the absence of choices,” Osotimehin wrote in the report, citing lack of access to an education, job opportunities or health care.

The report said that high rates of adolescent pregnancies correspond with other social problems, like powerlessness and poverty. In many instances, the pregnancies are a result of sexual violence. The issue is most evident in the developing world — with 95 per cent of births to women under 18 occurring there. Ten per cent of women aged 20-24 in the Middle East reported at least one birth before age 18, while 22 per cent did in South Asia and 28 per cent did in Western and Central Africa, the report says.

Every day, 20,000 girls below age 18 give birth in developing countries. Nine in 10 of these births occur within a marriage or a union — highlighting the scourge of child marriage.

“The birth or pregnancy in one adolescent is unacceptable,” Osotimehin told reporters in London. “Whether it’s going up or down is not the issue — 7.3 million is huge.”

The report cited data gathered in 54 countries through two sets of surveys carried out between 1990 and 2008 and between 1997 and 2011. They showed a drop in the percentage of women aged 20 to 24 who reported giving birth before they were 18 from about 23 per cent to about 20 per cent. The countries covered by the surveys are home to nearly two-thirds of the total population of developing countries, excluding China.

In some places, the data noted, the decline has been rapid, due to a decrease in early and arranged marriages. Even then, one girl in 10 has a child before the age of 15 in Bangladesh, Chad, Mali and Mozambique.

“Childhood must never be derailed by motherhood,” it said, calling for greater efforts to end child marriage and more action on gender equality.

According to UNFPA, out of 500 million adolescent girls in the developing world, more than 3 million of them – aged 10 to 19 – live in Nepal. Imagine 3 million adolescent girls educated, healthy and happily enjoying their childhood in their homes, schools and public spaces. Adolescence is a crucial period of life and a vulnerable one: young girls and boys experience body changes, deepen their values, develop new relationships and start dreaming about their future.

However, many harsh realities stand in the way of realizing the dreams of our adolescent girls such as poverty of opportunities, gender discrimination and inequality, multiple forms of violence, abuse and exploitation, child labour, child marriage, adolescent pregnancy, deep rooted patriarchal norms and values, to name  a few.  Adolescent pregnancy is a key developmental issue.

Adolescent girls under the age of 15 are up to five times more likely to die in childbirth than women in their 20s. Pregnant mothers, if too young, are at a high risk of dying while giving birth or suffering from complications, including obstetric fistula and uterine prolapsed.

The overwhelming majority of adolescent girls who become pregnant in Nepal are married and pressured to have a child. There is also a direct correlation between lack of education and child marriage (72% of women 20-24 were married before 18 whereas this figure drops to 23% for women with secondary education of higher). Furthermore, 37% of married adolescent girls aged 15-19 or nearly two in every five girls are not working. The major reasons quoted for this are disapproval from their family to work and small children to look after. Even among those who are employed, 76.2% are not paid in cash or kind for their work.

Since the educational status of adolescents and youth influences many health indicators, collaboration between the health and education sectors is the key.

36 People Die Due To Dengue By Agencies 2 days, 4 hours ago