After the implementation of Poverty Reduction of Informal Workers in Solid Waste Management (PRISM), the livelihood of informal waste workers has transformed 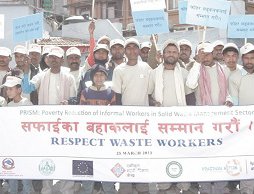 Purna Man Waiba, president of Samyukta Safai Jagaran, an organization of Informal Waste Workers (IWWs), is the happiest man now. Although IWWs are still facing so many problems, the last three years have brought many changes in their day to day life.

"Now we don't have to fight alone for our cause, we have organizations to take care of our issues and agenda," said Waiba.

Unorganized and neglected earlier, informal waste workers have now the Samyukta Safai Jagaran, which was formed in coordination with PRISM to provide recognition to waste picking as a decent job and waste pickers as decent workers.

The life of over 4,000 informal workers working in Solid Waste Management used to be worse. Collecting wastes through naked hands and living on the piles of waste along the rivers like Bagmati, they were the poorest of people serving the richest in the urban Kathmandu Valley.

However, this is gradually changing. With the implementation of Poverty Reduction of Informal Workers in Solid Waste Management (PRISM), informal solid workers are organized and mechanized.

Ram Pukar Das and Sakhiya Khatun two informal waste pickers have noticed the real changes in their livelihood. "Yes we still live in the bank of Bagmati river in a slum. But, there is a change and better environment for us than in the past. We have our own cooperative where we can deposit our savings and borrow the money at the time of need."

Instead of collecting the solid waste by naked hands, they have started using gloves and other equipment to collect the garbage. Similarly, the establishment of cooperative has helped them develop the habit of saving and lending. As they are organized, informal workers now realize they have more bargaining power than before.

With the improvement in the conditions of waste pickers, the common people are also respecting and treating them with dignity. "PRISM has shown how organized informal workers can make their livelihood different," said Srijana Devkota, project director of PRISM.

"One of the aims of the project is to enhance social protection of the informal workers and vulnerable groups dependent on solid waste for their livelihood in the solid waste management sector," said Devkota. “After the implementation of project, one can see many visible changes happening in the livelihood of people. Many waste workers are sending their children to schools and they have now certain savings also."

Urbanization in Nepal is increasing at an alarming rate, from 3-17% in the last 5 decades. Due to the lack of appropriate employment opportunities, a large number of workers in the informal economy are engaged in waste-related work.

Funded by European Union and Practical Action Nepal, CIUD has been implementing Poverty Reduction of Informal Workers in Solid Waste Management Sector Project (PRISM) in Kathmandu Valley since 2011. It is a three-year project.

The primary objective of the workshop was to generate respect for informal waste workers (IWW’s) and increase the level of social awareness about their often neglected contribution in the waste management sector. The campaign also aimed to make the public aware about the five R’s: Reduce, Reuse, Recycle, Respect (for waste workers) and Recover.

"As we start our journey, this will require a great deal of coordination between the Municipalities, Solid Waste Management Technical Support Center and the Ministry of Urban Development. CIUD commits to play a facilitating role to coordinate between the stakeholders,” said Pushkar Lal  Shrestha, Technical Advisor of PRISM project and the Executive Director of CIUD.

According to an estimate, there are 15,000 waste pickers and 700-800 Kabadis (waste/scrap dealers). Although these workers play a vital role in dealing with the waste generated in the Valley, the profession is considered shameful and degrading, and its contribution is unrecognized by society as well as local and state authorities.

Urban waste pickers are among the poorest people in Kathmandu valley. Most live in squatter settlements along the riverbanks. They are exposed to many health risks through unprotected handling of waste materials, and due to their poor living conditions.

The waste picking profession is despised by the rest of society, despite its contribution to removing and recycling large quantities of waste. Waste workers are often exploited socially and economically. None of the current policies or plans includes social protection provisions which could help improve the situation, and raise the status of the profession.

"We are targeting around 4,000 waste workers. We also want to increase programs for health and safety, leading to better health outcomes. We are also working to increase income of workers of 2,000, and access to affordable health care insurance to 1,000. We expect that at least 50% of beneficiaries will be women," said Devkota.

Along with many other projects, Practical Action Nepal has shown that change in the livelihood of the poor people is possible through various interventions through partnership of the government, civil society and private sector.