DFID-financed Enabling State Program has come to an end following 13 years of its implementation, laying the foundation to and building institutions in various governmental and non-governmental sectors 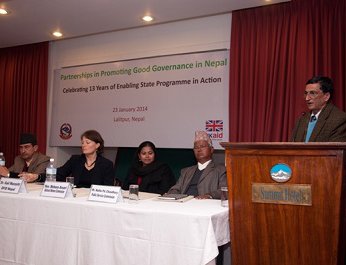 Maniram Chaudhary, 55, received justice when he sought community mediation. He had a dispute over land with his neighbor and spent six years, taking his petition to the court. Community mediation came to his relief -- he settled his petty dispute locally.

"I am happy that we were able to settle our dispute. Community mediation is the best way to resolve petty issues," said Chaudhary.

Bhatta, 28, has a similar story to share. "Thanks to the program launched by ESP, incidents related to Chhaupadi (taking women in cowshed during menstruation) have drastically decreased in Accham district," said Bhatta.

In its thirteen years, ESP saw many ups and downs. It came in for a controversy three years ago for its role. A group of people even criticized DFID-ESP for promoting ethnic politics. However, it concluded with a positive note at the end as various stakeholders admired the role it played in the last decade to build the foundation of social and governance reforms.

Launched in 2001 against the backdrop of armed conflict and faltering democratic process, the ESP made a major contribution in the area of social inclusion and inequality and capacity of both the government and civil society and ability of citizens to claim their rights and access justice.

Working in all 75 districts of Nepal, ESP sought to strengthen the relationship between the Nepalese sate and its citizens and to promote inclusive policies and programs.

“I feel pleased and honored to be part of the Enabling State Programme Closing Celebration Event.  And I have to say I think that this should really be a ‘celebration’,” DFID-Nepal head Dr. Gail Marzetti said.“Today we are here to celebrate the many achievements of and learn lessons from one of our most innovative and longest running governance programs worldwide.”

Although it was the moment of despair as a successful program dedicated for social and governance reforms was coming to an end, but it opened the road for a new beginning, said Mohnaha Ansari, member of National Women Commission. “One of the major achievements of the project is that ESP helped to strengthen the process of inclusion, supporting the programs run by marginalized and socially vulnerable groups.”

“I am very much disappointed at this moment as we are at the verge of closing a program which has made significant contributions in the areas of social inclusion particularly the women,” said Sharmila Karki, president of NGO federation Nepal. "Unlike many other programs, DFID's ESP program also supported NGOs and other civil society organizations to make them more effective.”

One of the important components of the last phase was to implement Right to Information Act. ESP supported National Information Commission to develop RTI strategy and launch some piloting programs in different parts of Nepal.

"ESP's support was very important for us. At a time when the commission was suffering from lack of resources to develop strategy and implement Right to Information Act, ESP's support was significant. In the process of making the government more accountable and transparent, the support given to the commission will be helpful," said Shree Ram Panta, secretary at the National Information Commission.

Although the government of Nepal promulgated acts for making civil service inclusive at all levels, what it lacked was the systems and institutional capability. The support to Nepal Administrative Staff College and Public Service Commission aimed at addressing this gap.

"With the support from ESP, we were able to develop a new curriculum based on inclusion for the civil servants. This curriculum is part of training for various levels of gazette officers working in various government offices," said Punya Prasad Neupane, executive director Nepal Administrative Staff College."The curriculum will help sensitize civil service, which has over 90,000 civil servants."

Similarly, ESP's support also contributed to strengthen the capacity of Public Service Commission. "As a frontline organization in the process of recruitment of all civil servants, PSC's role is important in making the civil service inclusive. ESP supported us to enhance the institutional capability and institution," said Nathuram Chaudhary, secretary at Public Service Commission.

In 13 years, the program directly benefitted over2 million people -predominantly the poor and marginalized from rural areas - to have better access to justice, to enjoy improved public services, and to develop their skills to hold the government accountable.

"I am also struck by ESP’s ability to take challenge and support innovative ideas. Its support to reach out to thousands of youths through the national football and cricket associations to help raise awareness amongst men on the need to combat gender based violence was something of a new approach in Nepal. One of the key lessons from ESP is the importance of trying new things and piloting new approaches which can then be scaled up if they work, or dropped if they don’t," said Dr. Gail Marzetti, DFID-Nepal head.

Along with others, ESP also taught the importance of strong partnerships between government, civil society and Nepali citizens as the results from ESP have only been possibly due to that. It is only through such a collaborative approach that many of Nepal’s governance challenge will be addressed.

IGP GYAWALY Simple Mantra By A Correspondent 2 days, 14 hours ago

DEFENSE MINISTER IN KALAPANI Conciliation or Provocation? By A Correspondent 3 days, 14 hours ago