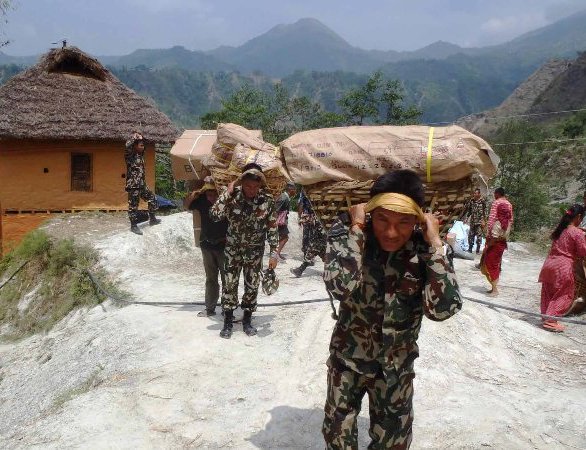 With the closure of the highway linking over two dozens of Village Development Committees of Sindhupalchowok and a halt in the routine bilateral trade between Nepal and China, submerging of 5 MW power plant and disconnection of the power supply with 45 MW Bhotekosi hydropower and 10 MW Sunkosi hydropower, Sindhupalchwok’s landslide, which washed out over 400 houses, killing over 200 people, is one of the major Himalayan disasters in the recent times. At a time when Nepal is in the process of building infrastructure like highways, hydro power plants and cities along the riversides, this incident has reminded how vulnerable they could be. The time has come we think about fragile mountains before constructing major infrastructure

Even after ten days of the mammoth landslides which washed out houses, a portion of Kodari highway, transmission lines, lives and property, blocking Sunkoshi River, the mountainous terrains are yet to calm. Small scale landslides are still disrupting the search and rescue operations and efforts to reduce the water accumulated at the suddenly created artificial lake in Sunkoshi.

Despite several controlled blasts by Nepal Army at the dam site, the water flow is yet to decrease the lake water at the desired level. According to Nepal Army officials, the water level has already started to recede but it is too little to show any visible impact.

As the water level started rising, several controlled blasts were carried out at the Sunkoshi high dam to drain out more water from the blocked Sunkoshi River in Jure area of Ramche VDC of Sindhupalchok district. "The dam comprised rock, mud, and sediment, and that is the greatest concern,” said a geologist. The Nepal Army is blasting holes in the dam to drain the water. If the dam were to break, the resulting flood would put as many as 400,000 people at risk.

The slow discharge of water in the natural lake formed by blocked Sunkoshi River is ringing alarm bells to the authorities. Experts said that the slow process of receding lake is due to the poor outflow of water from the logged river.

On an average, the rate of outflow is 205 cusec (cubic foot per second) and the inflow rate is 180 cusec, according to Jhanka Nath Dhakal, the chief of National Emergency Operation Centre. "Water level is not receding due to poor drainage of water," said Dhakal. "Expert hydrologists and geologists are conducting a study at the site to identify a feasible solution to the problem."

In order to drain out water from the lake that extended upstream, the Nepal Army had carried out controlled blasts since the last week to widen the way out that for the water to find on its own after coming up to the top of the debris. The mammoth barrier, however, has not been cleared yet, risking outburst of floods.

Landslides that hit the entire Jure bazaar in Mankha of Sindhupalchok, killing an unknown number of people, went on to block the course of Sunkoshi River. The river blockage, on the other hand, has imposed a threat of outburst floods, threatening thousands of people living downstream, and inundation upstream.

The NA has airlifted an air compressor, other mechanical equipment and a drill machine to the site in order to enhance the regulated flow of water from the high dam.

The water level in the grand lake had extended more than three kilometers upstream and harbored a volume of an estimated seven million cubic meters of water in 12 hours of the blockage.

“Nepal Army officials are cautiously taking the efforts to drain out the water,” said Gopal Prasad Parauli, Chief District Officer of Sindhupalchok, who is monitoring rescue and relief operation for the landslide victims.

The river blockage imposes a threat of inundation in the upstream areas and outburst floods in the downstream areas. Declaring many downstream areas on the bank of Sunkoshi River and Saptakoshi River the ‘flood crisis zone’, the government has already asked people to stay alert and evacuate the region.

“Rainfall and fresh floods have rung alarm bells to the locals and the rescuers. Water level did not decrease visibly,” said experts.

Fragile and weak, Nepal is prone to landslide and floods. Globally, Nepal is second most vulnerable country in the world in terms of natural disasters. This is not the first landslide this year. A major landslide at Sankhuwasabha district has already killed over 20 people. Similarly, another landslide killed 4 people in Jiri of Dolakha district.

According to the report of the Ministry of Home Affairs, there were 34 incidents of floods and 37 incidents of landslides which killed 24 and sent 10 and affecting 275 families. Similarly, there are 75 deaths, 127 missing and 47 injured and 13 family affected and 128 houses fully destroyed and 21 partly damaged.

“The mountain has completely fallen. There are no more houses in the mountain and land at the banks of the river,” said Rajan Shrestha, a resident of Barahabishe, saying over 400  houses were washed out and remaining are under threat due to heavy landslide.

Along with the damage in the hydropower station downstream, it cut electrical transmission lines along the valley. In all, nearly 10 percent of the nation’s hydropower capacity, some 67 megawatts, was severed by the landslide.

The current landslide did not occur suddenly as a massive landslide had occurred in Jure of Magma VDC in June last year. The debris from the landslide only obstructed the Araniko Highway briefly and the disaster passed mostly unnoticed. Experts say the massive landslide was the consequence of the last year´s landslide.

“The massive landslide this time was the aftereffect of last year's landslide on a hill opposite to human settlements in the village. One end of the hilly area had crashed in the landslides and a large amount of heavy rocks along with mud had rolled down on the middle portion of the hill which blocked the high way last year,” said Narendra Raj Khanal, a geographer with the Tribhuvan University.

"Though one edge of the hill had collapsed last year, the edge facing the Araniko Highway and Sunkoshi River had not crashed down. When I visited the site some two months ago, I had sensed possible danger in case of landslides. Finally, the tragedy occurred," said Khanal.

Kapil Dhital, a civil engineer with the under construction 102 MW Middle Bhotekoshi Hydropower Project, said the exposed heavy rocks rolled down causing disaster as the rocks might have been ruptured inside due to exposure to heat and cold. The rupture decreases mud binding capacity of the rocks, which means the rocks and muds slide easily during rainfall.

Similar landslides have occurred in other areas of the district in the past as well. A study jointly conducted by International Center for Integrated Mountain Development (ICIMOD), South Asia Water Initiative and TU, shows that a landslide dam outburst flood had occurred in 1982 in Balephi village killing 97 people and 54 people had died in 1996 due to a landslide caused by dam outburst flood in Larcha, another village of the district.

"So, the hilly range of the district has always been vulnerable to landslides. But due to lack of detailed study of landslide incidents, we have not been able to develop risk minimization measures and analyze trends," said Khanal.

Department of Hydrology and Meteorology has not yet determined the cause of the landslide. With its young geology, seismic activity, steep slopes, and intense cloudbursts, this kind of events is regular in Nepal. Many blame intense rainfall, road and hydropower construction, and a slope weakened by previous slides.

Experts argue that landslides in the Himalayas are growing more frequent and severe as the globe warms and intense rainfall increases. Human interventions like building roads, tearing down forests, and stripping the soil magnify the natural hazards.

The  question now: will the hillside collapse again? What can be done to stabilize the slope? How stable is the landslide dam across the Sunkoshi River? Department of Water Inundation along with ICIMOD and other non-government organizations like Nepal Engineering Association have started the study.

Although national and international debates are taking place over the deadly landslides, Nepalese officials are paying their attention more on traditional pattern of search and rescue and rehabilitation. "Search and rescue operations are underway," said Dhakal. According to him, an immediate relief of Rs 40,000 has been distributed to the families affected by the landslides.

The District Administration Office, Sindhupalchok, has already declared dead those who were missing in a massive landslide in Jure of Sindhupalchok. According to the DAO, as many as 123 persons have been declared dead who were missing in the landslide that swept away the entire Jure bazaar of the district on a Saturday. Bodies of 33 persons have been recovered so far from the incident site.

A joint team of police and Nepali Army are struggling to search for bodies at the incident site buried under debris. They said, hard as it has become to find the bodies of missing persons now, finding them alive is next to impossible. The landslide tore down two settlements where majority of Tamang and Shrestha families had been residing for ages, leaving over a hundred families stranded.

Sudip Acharya said not only Ban Sanghu and Jure area were at risk, but also Lamo Sanghu and Khadi Chaour areas downstream were under threat. All shops remained closed and thousands of locals have already left the villages in search of safer places.

Locals blamed government authorities as ignoring their repeated calls to protect the area. “It was not a fresh landslide. Small landslips have been occurring in the monsoon season for the past three years,” Durga said, accusing the authorities of turning a deaf ear to their requests to do something. “The residents have no other place to shift to.”

Durga added that the government had not taken the disaster seriously in the past.

The families of victims also complained they were not getting proper relief and compensation from the government. The government authorities have not collected exact details of loss and damage to human lives and property yet.

The landslide blocked river, killed 156 people, reduced 10 percent of Nepal’s hydropower, washed out a portion of Kodari highway  and displaced hundreds of people with property loss of millions of rupppes. The deadliest landslide in Nepal in a decade is raising fresh questions about Nepal’s ability to maintain infrastructure to exploit the waters of the Himalayas to export the electricity.

Empowering Communities To Improve Quality of Education In Nepal By Keshab Raj Bhatta 2 days, 20 hours ago

IGP GYAWALY Simple Mantra By A Correspondent 4 days, 16 hours ago

DEFENSE MINISTER IN KALAPANI Conciliation or Provocation? By A Correspondent 5 days, 16 hours ago

VOLUNTEERING Israeli Way By A Correspondent 2 weeks, 3 days ago