Girls go back to school

Shy yet determined, Shahida and Hamida both share a favourite subject, English, and have a goal now, to complete school and be educated 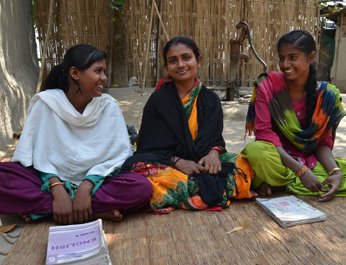 Shahida and Hamida have a reason to smile. They are able to reconnect with old friends, put on school uniforms again and enjoy being back in a formal learning environment. They have gone back to school.

Going back to school is not always an easy transition for young girls living in rural villages in Nepal. The challenges are many, especially when they choose to go back to school after a break. As much as they wish to go back, many never get the opportunity and even if they do, they find they are not able to cope with the demands of study, so they find that most of their peers have reached higher grades while they are relegated to studying in lower grades. But for Shahida,15 and Hamida,16  things have been different. They have successfully transitioned from informal education to school, bridging the learning gap and now enjoy the benefit of going to school despite their age.

Shahida and Hamida belong to a minority Muslim community and hail from a village in Sunsari district, which lies in the eastern Terai region. Living in the same neighbourhood, both used to attend the same Madrasa (Muslim school). However, both of them stopped attending school when they were in the third grade so that they could help their parents raise their younger siblings and do housework. Their daily routine used to include helping their parents in the fields, cooking, cleaning, washing, feeding the cattle and taking care of their younger siblings. Looking at what usually happened to girls and seeing their sisters getting married at an early age, both Shahida and Hamida knew what their future had in store for them. They never imagined that they would be able to rejoin school again until they enrolled in the informal primary education classes that World Vision helped run in their community a few years ago. The informal classes last for four hours and are held with the help of a trained teacher in the courtyard of a student’s house, mostly in the mornings during the planting and harvest season, or in the afternoon at other times.  Almost all school subjects are taught and extra-curricular activities like singing and dancing are also held, albeit in the absence of a formal school environment.

After Shahida and Hamida joined the informal classes two years ago, both had an opportunity to learn a range of subjects like Nepali, English, Social Studies, Science and Maths. This helped them catch up with their primary years of education. After they finished attending two years of informal classes, they appeared for an examination, the result of which determined the class they would be eligible to rejoin in a formal school.  Last year, both Shahida and Hamida were both admitted to the sixth grade in the nearby government school. Today they study in the seventh grade. The school they attend has been helped by World Vision to create a child-friendly learning and teaching environment. Given the girl-friendly toilets and absence of corporal punishment, the transition for both Shahida and Hamida has been easy.

Bina Shah, who has been a teacher and mentor for Shahida and Hamida shares, “I am so glad to see both my students back in school.”  She has been trained in running informal classes and has been teaching for the past three years. She says, “It is mostly girls who attend these classes as most of the drop outs from school are young girls. We reach out to parents who are not sending their girls to school and bring them here. There are challenges as this is a very disadvantaged community and parents are not cooperative sometimes, but when they see other girls coming to our classes they allow their daughters to join the class.”

Hamida’s mother Jaimul Khatun says, “My older daughter got married early but I want to see Hamida finish her schooling now that she is back in school.”

Shy yet determined, Shahida and Hamida both share a favourite subject, English, and have a goal now, to complete school and be educated. They are happy to be back at school and have made many friends. Hamida says, “I have many new friends in school and one of them invited me to her family gathering during the Tharu* festival and it was so much fun.”

Since 2011, World Vision has been helping run informal primary education for young children who have dropped out of school or have never been to school, providing training and salaries for teachers, teaching and learning resources, and stationery. At present there are seven informal primary education classes being run in six Village Development Committees in Sunsari district. Around 120 children attend these classes. 25 children have already rejoined school as a result.

EP DELEGATION Visit For Cause By A Correspondent 9 hours, 56 minutes ago