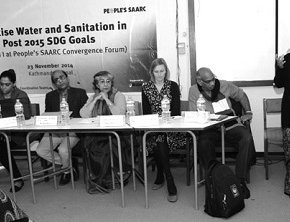 At a time when tens of thousands of children die every year in the world, including in South Asia, due to lack of access to basic sanitation, civil society leaders have expressed their concern over the state of sanitation. With coordination from WaterAid, a letter was published calling UN Secretary General Moon to give due focus on the crisis of sanitation.

Signed by over 62,000 health professionals globally, with 162 medical and health professionals from Nepal, the open letter to the Secretary-General of the United Nations has called to end the desperate waste of life caused by people not having access to a basic toilet.

WaterAid Nepal (WAN) in collaboration with national and regional Right to Sanitation Campaign Coordination Team (a network of civil societies of South Asia), through People SAARC, appealed for increased political commitment in ensuring WASH for everyone.

Regional Right to Sanitation Campaign Coordination Committee, with support from WaterAid, organized two side events followed by an art installation on 22-24 November to commemorate World Toilet Day and SAARC Summit.  The two side events extensively discussed on Human Rights to Water, Sanitation and Hygiene and sustainable development goals.

The Campaign also called on the 18th SAARC Summit to advocate that SDG process should include dedicated goal for realization of human rights to water and sanitation for all.

It also called on SAARC Governments to develop and implement the regional framework of action for immediate realization of human rights to water and sanitation for all in South Asia. They urged for protection of people's control over water resources and curb privatization of water resources and services.

During the event Amrita Gywali and Durga Sob from Nepal, and Bezwada Wilson and Ransigh Parmar from India shared their experiences of inequality and deprivation of WASH rights of marginalized people in the region.  Dr Abdul Matin from People's SAARC Water Forum discussed about importance to WASH in human development.

Saira Iftekhar MP of Pakistan assured to take forward the issue of human rights to WASH under legislation at their own country. Head of Region of WaterAid Tom Palakudiyil said, "Water and Sanitation for all can only be achieved in this region if individual government can ensure human rights to WASH focusing the most marginalized communities."

Similarly, the art installation was initiated by renowned artist Chirag Bangdel. The main objective of the art installation is to give a clear message that equality and dignity of people is possible only if everyone, everywhere has access to safe water, sanitation and hygiene (WASH).

WaterAid Nepal Interim Country Representative Therese Mahon said, “more than one in three children do not have a safe toilet to use. Children are amongst the most vulnerable to diseases caused by lack of sanitation, which may lead to undernutrition, stunting, and a lifetime legacy of disease and poverty.”

According to the World Health Organization, 88% of cases of diarrhea are attributable to a lack of access to basic sanitation, unsafe drinking water and poor hygiene. In total, over 12 million children are estimated to have died because of diarrheal diseases from 2000 to 2013, with a lack of these services resulting in 10.6 million of these deaths.

As many as 1,710 VDCs, 15 districts and 19 municipalities have been declared ‘open defecation free zone’ across the country so far. Similarly, according to worldtoilet.org, 2.5 billion people do not have access to a clean and safe toilet. One fourth of stunting can be attributed to five or more instances of diarrhea before the age of two.

Of the world’s seven billion people, 2.5 billion do not have improved sanitation. One billion people still defecate in the open. Women and girls risk rape and abuse because they have no toilet that offers privacy.

As sanitation is a global development priority and the state of sanitation in South Asia is bleak, the program organized in Kathmandu to draw the attention of South Asian leaders is likely to yield better results.