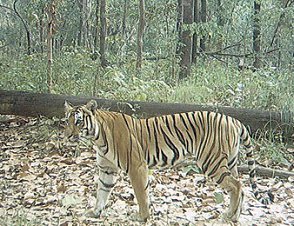 Despite the prolonged political instability in the country and uncertainty about the transfer and posting of government employees, Chitwan National Park (CNP), a public undertaking, has received an international award for its efforts to conserve wild animals.

CNP met a set of international standards considered ideal for the conservation of tigers. The award recognizes CNP for its excellent management of 17 major standards prescribed internationally for creating the best grounds for tiger protection.

“This is a great achievement for Nepal. Now, recognized for having the best conservation area for big cats, the success truly reflects the combined efforts of the Nepal government, local communities, the Nepal Army and various organizations working hand to hand to create a better shelter for tigers. I hope other countries will take lessons  from what Nepal has achieved in the past few years,” said Mike Baltzer of the WWF Alive Initiative.

The recognition to CNP is given by CATS (Conservation Assured Tiger Standards), an international committee devoted to develop and assure best habitation ground for the wild life protection across the globe.

According to Khalid Pasha, manager at CATS, a survey was conducted under major standards like tiger population, the involvement of local communities, overall management of the park and work force, flow of tourist and management of tiger habitation. CNP has secured impressive points in all these important categories.

“This is ... a gold standard that marks the management of CNP when it comes to tiger conservation. This achievement should certainly work as an inspiration for other tiger range countries to meet similar standards and create better homes for these valuable forest animals,” said Pasha.

Nestled at the foothills of the Himalayas, CNP is home to 120 tigers along with 68 species of mammals, 54 species of birds and 126 species of fishes. The park is best known for the protection of One Horned Rhinoceros, Royal Bengal Tiger and Ghariyal Crocodile. Located in the Southern Central Terai region of Nepal, the park extends to an area of 93,200 hectares of land, spreading to four districts Nawalparasi, Parsa, Chitwan and Makawanpur.

“In the coming days, we are planning to introduce this wildlife quality management certification for conservation of various other animals in both Banke National Park and Shukla Phanta Wildlife Reserve. There is a team that has worked behind the present success,” said Tika Ram Adhikari, director general at the Department of National Parks and Wildlife Conservation

Thousands of tigers once roamed the forests of South and Southeast Asia but the numbers have plummeted to about 3,000 worldwide. Experts say poaching is fueled by a thriving trade in China, where tiger parts are prized as status symbols and often used in traditional medicine.

"There is a culture among wealthy people in China (to own tiger parts)," said Michael Baltzer, leader of the WWF Tigers Alive Initiative, referring to people who mount tiger heads and decorate living rooms with rugs made from their pelts.

"One hundred tigers a year have been killed for the illegal trade since the turn of the century," said James Compton, Asia's program director for TRAFFIC, a wildlife trade monitoring network.

The numbers are based on tiger parts seized and reported by authorities, and suggests actual killings could be much higher.

Tigers will be hunted as long as there is such demand, said Anil Manandhar of conservation group WWF Nepal.

"Our goal should not only be zero poaching, but also zero demand for wildlife parts," Manandhar told the conference.

Nepal was hosting the anti-poaching international conference attended by delegates from 13 countries and several conservation groups to come up with a strategy to fight poaching in Asia.

India and Nepal are among countries praised at the meeting for their efforts to raise tiger numbers and curb poaching. Nepal reported 198 tigers in 2013, with the population of the elusive cats increasing by 64 percent in half a decade.

The country has marked two years since the last reported case of a tiger killed by poachers in 2012, said Tulsi Sharma of Nepal's Department of National Parks and Wildlife Conservation.

"This has been possible due to the involvement of the local communities in conservation efforts," said Sharma, adding that volunteers work as informers or guards to patrol national parks.

Although Nepal has made a major progress, it is yet to see how the pace is maintained in preserving the tigers. The support of organizations like WWF-Nepal, which have been involved in Nepal for a long time, is important for this.