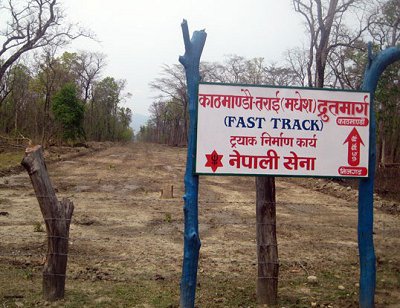 At a time when Nepal has been unable to complete the 28-kilometers long tunnel to bring water from Melamchi to Kathmandu in the last fifteen years, the country's politicians and policymakers have started to sell another impossible dream to construct highly sophisticated projects like Nijgadh International Airport and Kathmandu-Nijgadh Fast Track.

“We have enough resources to carry out these two projects. As there is no option to expand current Tribhuwan International Airport, proposed Nijgadh International Airport and Kathmandu Nijgadh Fast Track are the need of the hour,” said Rabindra Adhikary, chairman of Development Committee of Legislature Parliament.

At a time when politicians and economists are showing rosy pictures about the two projects, technical experts hold different views on the possibility of completing the construction of Kathmandu-Nijgadh fast track.

"The track has not been constructed in accordance with the design proposed by Asian Development Bank. We have started to open the track without completing the Detailed Project Design,” said transport planning expert Chandra Bahadur Shrestha.

“There has been a fault from the beginning. Nepal government acquired land and allowed Nepal army to start the earthwork excavation without concluding the detailed design. The 2008 feasibility study was based on the present road standards. However, Fast Track requires significantly higher geometric standards. With 3.5 m wide Nepal Army excavated section, the slope cuts are about 50 m which definitely reach at least to 100 m if the road section is widened to four lane expressways. Road sections with hillside cut slopes in excess of 35 meters may be more costly than an alternative involving some form of structure.  The road alignment is extremely fragile and excessive hill side slope invites accelerated landslides,” writes Shrestha. (See New Spotlight, 5 December 2014).

However, other economists hold the view that Nepal’s own revenue will be enough to start both projects. “We don’t need ADB and the World Bank’s support for Fast Track road. We have annual surplus of revenue about 20 billion rupees. If we can allocate 20 billion annually to this project, we can complete it in five years,” said former finance secretary Rameshwor Khanal.

Initially, the total cost of the project was estimated to be around 100 billion rupees. However, the cost of the 76 kilometer long fast track has gone up now up to Rs.150 billion or one thirds of Nepal’s annual budget.

Supported by the Asian Development Bank (ADB), the current fast track or Bagmati Corridor Feasibility Study was conducted in 2003. A feasibility study and Preliminary Design of the Fast Track in 2008 laid a basis for taking forward this project.

Although the words of Prime Minister Koirala, NC leader Deuba and CPN-UML leader Nepal, including chairman of Committee Adhikary sound nice, the reality is very different.

Technically and economically, both the projects are difficult to justify. So far as the fast track is concerned, technically, there is the need to complete more than five dozen bridges before reaching Nijgadh.  At a time when Nepal’s growing regional disparity is coming to the fore, putting almost fifty percent of the budget in two projects in central region will have drastic implications to the other regions of Nepal.

As two alternative roads linking Kathmandu, including Banepa-Bardibas, have already been completed and Kanti Rajpath is in the process of completion, investing such a huge amount of money on fast track is difficult to justify. Bringing the railways may be a different story.

Given the present state of Nepal with failure to execute any order in land acquisition and other matters, lobbying for the construction of the two mega projects is unrealistic.

Thanks to the failure of government to clear the land, many transmission line projects have stopped. The national priority, Khimti-Dhalkebar Transmission Line, is yet to complete because the government has to settle of the land.

Even in Pokhara, the land owners are demanding more compensation for their land causing the trouble in the stage of implementation.

However, Development Committee under the Legislature-Parliament is pushing the construction projects--Kathmandu-Nijgadh Fast-Track and Nijgadh International Airport. “Instead of pushing such mega projects, the parliament committee should push the concerned ministries to complete the projects which are overdue,” said an official on condition of anonymity.

After the meeting held with office-bearers of the bodies concerned and experts, Committee Chairman Rabinda Adhikari directed: “The two projects could not begin for long due to many reasons including dillydallying. The projects should be forwarded along with national decision and determination.”

Although Nepal needs to build mega infrastructure projects, they should be within the interest of people of Nepal. Such projects should not create more disparities in the country. Committees of Legislature Parliament need to take cautious approach before directing the concerned ministries.

EP DELEGATION Visit For Cause By A Correspondent 11 hours, 4 minutes ago