The heart of tourism, the city of Pokhara, saw its business dwindle amidst this shutdown. 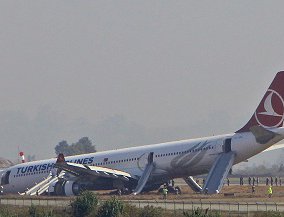 Nepal’s only international airport so far remained shut for four days after Turkish Airlines Flight TK726 skidded off the runway post landing. The four-day shutdown of the Tribuvan International Airport (TIA) brought huge disadvantages to the nation's already stagnant economy. Had the government responded effectively to the incident, this shutdown would never have cost those millions of rupees.

The timing of the incident was affected the tourism sector, the backbone of Nepalese economy. The shutdown had a multiplier effect in terms of the number of airline tickets booked, taxis and restaurant reservations. It was revealed that in five-star hotels, as large as Yak and Yeti, they had to cancel as many as 250 rooms, causing an estimated loss of Rs. 8 million.

The heart of tourism, the city of Pokhara, saw its business dwindle amidst this shutdown.  The March-May and September-November periods are peak touristic seasons. The weather around this time is pleasant for outdoor adventures. The plight this situation brought was such that the occupancy of the hotels that would otherwise be fully booked dipped by 30%.

As many as 24,300 passengers were supposed to be on standby during the halt in TIA alone. The incident has cast a negative image of Nepal in the global tourism industry. While voices of dissatisfaction regarding the condition of airport have been coming in the recent days, this incident has added fuel to those voices.

Nepal is an agricultural economy but tourism plays an important role in contributing to the GDP as well. The World Travel and Tourism Council revealed that the tourism sector contributed to 8.2% of GDP in 2013 and forecasted this figure to be 8.4% in the year 2014. The tourist arrival by air in Nepal was projected at 585,981 in 2014.This particular incident has madeNepal lose a huge money, with TIA alone incurring a loss of around Rs. 10 million.

The incident has showed how vulnerable we are to small threats and has raised questions over the safety of passengers. The accident could have turned severe causing loss of lives. The fortune of the passengers and most importantly the effort of the pilot made us possible to escape a big tragedy.

The airport had to remain shut for four days because there was a lack of proper equipment, which then had to be brought from India. In such a technological era, we had to use massive manpower comprising of 25 experts from India, 400 Nepal Army personnel, 360 Nepal Police personnel and 200 other people lifting the plane to apron.

Its further implication to the economy was viewed in terms of the country’s trade. Import and export were affected badly in the time of and after the crash landing.  With the fall in number of exports, the whole trade cycle was affected. Nepal already has a massive trade deficit with most of the countries it trades with; this incident has further reduced the exports, leading to a fall in revenue collection.

Remittances have become the main source of income to the Nepalese economy. The data from International Organization for Migration shows that as many as 1700 Nepalese migrant workers are leaving Nepal. The four days cancelation resulted a direct loss of the remittance amount too. The monetary transactions through informal means were also affected.

This incident has shown that we are in dire need of reforming the civil aviation standards and, not just for the sake of passengers but also to guard our economy from unexpected threat, mainly because we are a developing country.

BEEN Energy Efficient Building By A Correspondent 10 hours, 47 minutes ago