The fall in fuel price could be significant in improving the balance of payment. 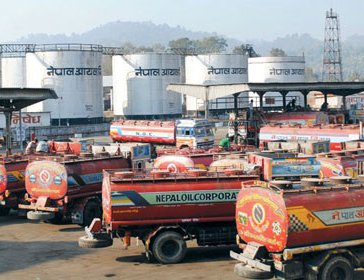 With the fall in the fuel price, Nepal's stagnant economy could see signs of improvement. From September 2014, the government had adopted an automatic pricing mechanism for petrol and diesel. Since its implementation, there have been as many as eight revisions in their prices. While some have opined that the fall in price has had a positive effect in the country, the rest consider it to have very minimal implications.

The fall in fuel price could be significant in improving the balance of payment. With the price fall, less foreign currency is spent on importing fuel. That means the government budget is saved to some extent. This saving provides some relief in view of the surging debt of Nepal Oil Corporation. For domestic products based on oil, the decline in fuel prices could be crucial in triggering their sale.

The fuel price has a direct relationship with the transportation cost -- one of the major reasons behind inflation in Nepal. The economy bears about 60% of the transport cost. So, the price decline has two profound effects. First, the falling transportation fare would directly benefit the citizens. Second, the indirect cost, hidden in manufacturing of products and delivering of services, goes down significantly. This not only lightens the fiscal load, but also frees up the government budget for investment in other areas like infrastructure development.

The food price has a direct connection with the fuel price for an agrarian economy like ours. The advancement in agriculture tools and technology has enabled the use of modern equipment and machines that run on fuels. Fuel is required in agriculture sector from transporting seeds and fertilizers to dispatching products to the market. In the context of Nepal, there has been a change in agriculture system recently, with more focus on cash crops. These kinds of crops rely on the use of transportation more often. The price of these products is directly dependent on the costs of transportation, seeds, fertilizers, all of which are directly or indirectly influenced by the fuel cost.

However, the fall in fuel price does not always bring constructive changes. The drop in global oil price has led to a decrease in revenue collection in most of the energy exporting countries. The slowdown of global economy could lead to depreciation of foreign currencies, making it expensive for import driven economy like Nepal.

Nepal does not import crude oil directly, instead buys refined oil from India, which is then sold by levying applicable taxes. The benefit of drop in fuel price does not hold true in every circumstance. The foreign rate of exchange and the buying/selling price for many businesses are fixed in advance. For such businesses, the effect of fluctuating oil price would be minimal.

While many Asian countries are taking advantage of the fall in oil price, Nepal has not been able to utilize the situation to its best advantage.  As stated, the fall in oil price helps a country save its foreign currency reserve, as the airfare, cargo expenses and even the commodities costs fall. But it cannot be inferred that foreign currency reserve will always increase as the market is repellent to risks and many businesses choose to hedge their funds to reduce losses

Nepal’s capacity to utilize this downfall in oil price is also constricted due to its dependence on China and India for most of its imports. The scenario would have been different had there been numerous industries situated in the country. The plight of the industrial sectors is such that the number of large industries can be counted at fingertips.

The global market is also highly affected by the volatility in oil prices. The demand-supply rule works well in the global oil market. The fall in oil price is a result of declining demand contributed by slow economic growth and increase in oil production by developed nations like United State. The current change in oil price came as a result of the OPEC’s stand not to cut the production to prop up the price as it seems to be concerned about retaining the global share than stabilizing the price. Falling oil price has two-dimensional impact on the commodity market and economy as a whole. Industries like automobiles, paints, footwear and plastic industries are influenced by the change in oil price, and will see a positive effect, while gas industry receives a negative effect. The countries that rely on oil export for financing their economy suffer the most.

Therefore, fuel price is directly tied to the economic performance of a country. It cannot always be concluded that the decline in oil price would necessarily result in positive changes. This proves disadvantageous for oil exporting countries. In case of Nepal, the benefit of drop in oil price would be profound should there be ample industries. Nevertheless, the advantages of falling oil price outweigh the disadvantage for a developing economy like Nepal.

BEEN Energy Efficient Building By A Correspondent 10 hours, 55 minutes ago