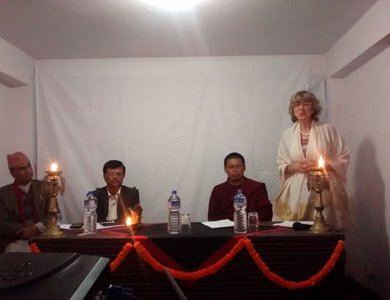 With the change in climate and landscape, Nepal’s many historically important heritage sites are deteriorating and vanishing. However, the preservation and renovation model followed by Bhaktapur also gives some hope for conservation of historical monuments.

Along with others, participants and experts discussed on decision making process regarding heritage, management of heritage sites- user group involvement, business heritage-investing heritage and locally and altered useful technologies.

Inaugurated by Director General of Department of Archeology, various speakers highlighted the importance of conservation of heritage sites for the future generation.

At the moment, monasteries in Nepal’s northern areas including Mustang, Dolpa and Monasteries in Laddakh and Sikkim in India and Bhutan has been facing a lot of problems.

As the rise of temperature has brought changes in the rain patterns, the mud roof of the monasteries is unable to face the high amount of rain, whichis damaging the wall paints inside the monasteries.

Renowned heritage conservationist Susanne Von Der Heide argued that Nepal can learn from Bhutan which has been in the process of preserving and conserving the monastery.

In the name of preservation, there are also trends of remaking the paintings in different parts of the Nepal.

Kunga Wangmo, archaeologist, conservationist from Bhutan, shared her experiences of conservation from Tango Monastery in Bhutan. “We are preserving the monastery rather than renovating,” said Wangmo. “There is the need to have community support to preserve the monasteries.”

Professor Dr.Ramesh Dhungel said Mustang’s heritage needs to be preserved and there must be efforts made to do so. Architects, experts and other historians involved in conservation of historical sites expressed their views.

Presenting his paper on climate change and traditional technology in Nepal, Padma Sunder Joshi, and director of UN Habitat expressed that the conservation efforts should be made looking at the implication of climate change.

Locusts Reached To 26 Districts In Nepal, Destroyed The Crops By NEW SPOTLIGHT ONLINE 3 days, 20 hours ago