The Israeli Field Hospital was officially closed on Sunday, 10 May 2015, amidst the presence of Minister for Urban Development Dr. Narayan Khakda, senior Nepalese Army officials, medical personnel from the Hospital and Israeli Ambassador to Nepal Yar 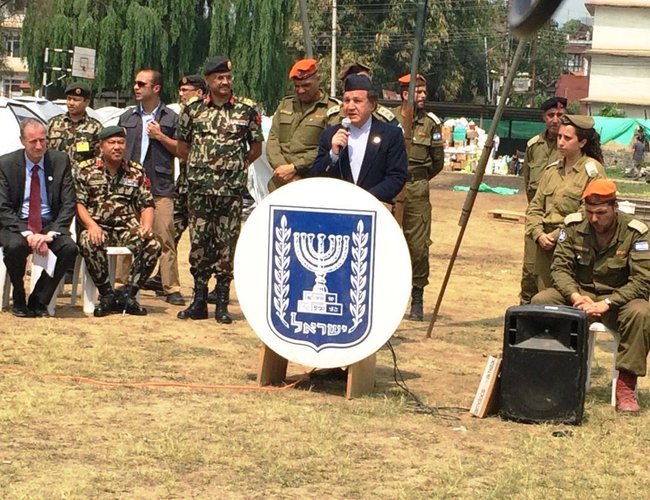 The Israeli Field Hospital was officially closed on Sunday, 10 May 2015, amidst the presence of Minister for Urban Development Dr. Narayan Khakda, senior Nepalese Army officials, medical personnel from the Hospital and Israeli Ambassador to Nepal Yaron Mayer.

Israeli Field Hospital was flown from Israel with 260 military medical personnel and had been in operation in Chhauni, since Tuesday, 28 April 2015, to provide medical assistance to the earthquake victims.

According to a press release of Embassy of Israel, the Hospital was in full-fledged function for 12 days. Approximately 1500 patients received treatment from the Israeli medical team in the hospital and other locations including critical surgeries to earthquake victims. The hospital also witnessed birth of eight babies by both natural and cesarean process amidst the chaos and tensions of earthquake aftermath. Moreover, it conducted more than 70 life saving surgeries.

Minister for Urban Development Dr. Narayan Khadka graced the closing as the Chief Guest and thanked on behalf of the Government of Nepal to the Government of Israel and Israeli Defense Forces (IDF) Medical Corps for their invaluable contribution in saving lives in this difficult time. He further said, “IDF is one of the first humanitarian groups and one of the largest medical groups to lend support in this time of need.”

Speaking at the closing, Ambassador Mayer, said, "Israel has been deeply saddened by the earthquake and damages.  However, we trust that the people of Nepal have shown their courage to withstand it and in this process the people of Israel stand by their side”.

Meanwhile, Israeli army engineers inspected hundreds of buildings and structures in Kathmandu that have been damaged by the earthquake and its aftershocks.  They had provided needed consultations or approved their safety.

Further, a team of psychiatrists from Israel and Medical Clowns had provided workshops and trainings on how to recover from post-traumatic condition and assisted people in overcoming their fear from the earthquake and live a normal life.

Upon leaving back to Israel, a lot of equipment, medicine and various medical items that were brought for the treatment from Israel were handed over to various Nepali medical institutions.

Besides, the military hospital, people of Israel also have donated tons of equipment and relief materials to the people of Nepal and many Israeli organizations are contributing to relief and construction efforts.

The people and government of Israel share their condolences and grief to rebuilt the devastated areas and rehabilitate the people and stand by as friends stand by.