Newly-appointed Chief Justice Kalyan Shrestha said he would accord top priority to the appointment of justices in view of the growing backlog of cases. 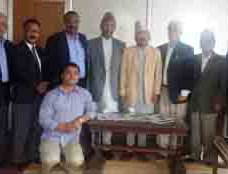 Newly-appointed Chief Justice Kalyan Shrestha said he would accord top priority to the appointment of justices in view of the growing backlog of cases. “Files of legal cases are piling up, but there are few justices to look into them. So my first priority will be to appoint judges to clear the backlog of cases,” said Shrestha in a meeting with Nepal Law Society Office Bearers at his office.

He stressed the need to keep the judge appointment free from political influence.  "Judiciary is an independent organ of the state. Thus, it should allow functioning freely," said chief justice Shrestha.

Born in Baglung in April 1951, Shrestha had joined the government service in 1972 as district development officer. Two years later, he switched over to judiciary entering the Supreme Court as section officer.

A meeting of the Parliamentary Hearing Special Committee had endorsed Constitutional Council’s recommendation on June 28 to appoint Shrestha as the new CJ in line with the tradition to recommend the senior most Justice to the top post of judiciary. Shrestha, who succeeded Ram Kumar Sah, will lead the judiciary until April 2016.

After serving in various positions for nearly three decades, he was elevated to apex court Justice in 2005. Shrestha, who completed his post graduation in International Law and Development from Institute of Social Studies in the Netherlands, is considered a bold Justice with clean image.

He has made some landmark decision including granting citizenship rights to third gender, barring political cadres from securing nomination for 26 seats allocated under nomination quota for experts and defining marital rape.