“MRP Conversion To Complete By Deadline” 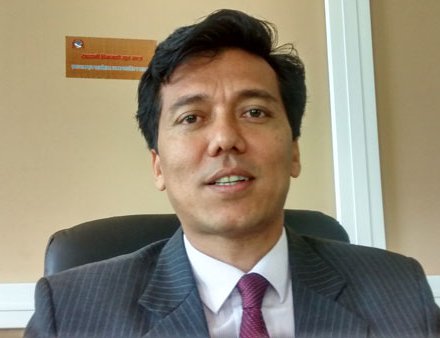 After serving many missions abroad, LOK BAHADUR THAPA is now director general of Department of Passport. At a time when the deadline to replace the handwritten passports with machine readable ones by November is approaching, director general Thapa spoke to NEW SPOTLIGHT on various issues. Excerpts:

As Nepal needs to covert the handwritten passport by November to Machine Readable Passport (MRP), what is the state of the action?

As you know, we have been working in a hectic pace to meet the target. We have already increased our capacity of producing 6,000 passports daily. However, we are receiving fewer firms as expected. We were expecting that there would be more firms after May. There are some delays. We are committed to convert all handwritten passports to MRP by the deadline of November 24, 2015 fixed by ICAO. We are making every effort to meet the target. We have already enhanced our capacity. We also mobilized our embassies and missions abroad to disseminate the message to send the passports of Nepalese to the department. Along with diplomatic missions, we have been using all social media including twitter, Facebook and other media as well as Nepalese communities. All embassies have been working accordingly.  The ministry has already instructed embassies to prepare work plan to achieve the mission.

Do you have enough MRP?

We have also recently extended our contract with Oberthur Technologies to increase the number of MRP and support Nepal to establish data base in different areas. As per the agreement, the Oberthur will supply additional 2.5 million pieces of passport to us till the new arrangements can be made.  We have requested the company to establish 50 live enrolment stations in different regions so that we can make the process easier. Our plan is to establish 10 live service stations in seven embassies and three counselors within three months or by September. After establishment of such centers, they can directly send firms to us. If we establish these stations by September, we can overcome the challenges.

How many MRPs have been issued?

We have already issued 3.5 million MRPs. Out of them 1.5 million were converted form hand written. We don’t know exact figures about how many hand written passports are in circulation now. Going through the data received from our embassies, what I can say is that the department is in a position to convert all the handwritten passports by November.

What are the challenges’?

There are certain challenges in the countries where large numbers of Nepalese migrant workers are working. So we are making efforts to install live enrolment systems in such missions.  The current system is a bit lengthy as we collect the firms and the missions are sending us through diplomatic pouches. The process of distributing the passport through this channel is lengthy.

The pressure in DOP is gradually declining. We received firms from 1000-1500  a day under a fast service.  There is a bit of a pressure on Sunday but there is just a normal crowd on other days. Recently, the ratio coming from the district is increasing. Under a predictable service, we have made special arrangements for distributing passports within a month from the district also. After the introduction of this system, there is a guarantee to receive the passport within a month by paying normal charge of Rs.5000.00.

How long does it take for an individual to get the passport?

How quick is the system in Kathmandu?

We have already reduced from 6-7 hours to merely around 30 minutes to fill the application. Our distribution is quick and prompt.  One can complain about the services through the social media. Our service is getting reliable and efficient.

How much revenue does your department generate?

DOP generated over 4.48 billion rupees in revenue. If you include all the revenues from districts and missions, the total revenue will be around Rs.15 billion. We are collecting all the information. We charge Rs.10, 000.00 under the fast service and the regular rate is Rs. 5000.00. The cost for the stolen passport is Rs.15, 000.00 from Kathmandu and Rs.10, 000.00 from districts.

How do you solve the problems of handwritten passports remaining beyond November 2015?

Our effort is to replace the passports by November 14. Despite our efforts, I cannot rule out the possibility to see a few thousand handwritten passports.  One option for such passport holders is to allow the person of such passport holding to return the country or to issue travel documents. We can sort out only after discussions with ICAO.

Incidents of fake passports are also appearing. How do you settle this?

In handwritten passports, there was the possibility of tampering the passport by correcting the name and other data. However, it is impossible to tamper the data and photo in MRP.  Someone may use false data from the district. If the recommendation comes for the fake person, we cannot stop it. However, it is impossible in the present situation.  If we get report of misuse of MRP, we do investigation and declare such passport as null and void.

I am quite comfortable to work in the DOP.  As the largest department under the Ministry of Foreign Affairs, I am proud to be here as this department is directly connected with the people. DOP and Department of Counselor are two departments of MoF which deal with the common Nepalese people. This is the face of MoF. We have made a lot of improvement in the system and I am personally very satisfied.

Is there any possibility to decentralize passport issuance in the regional or district levels?

Leaders from various political parties are demanding decentralization of the present process.  However, there is a direction of ICAO for the MRP and E-passport. As this is related to security issue, we need to strictly follow the ICAO’s guidelines. We need to consider the security issue when we make plans to decentralize it. We have to see whether it will compromise security or not. Now our efforts are to make the passport distribution decentralized despite the process of making it being centralized. We are now making efforts to improve the distribution system. This will reduce the number of days for the delivery of the passport.