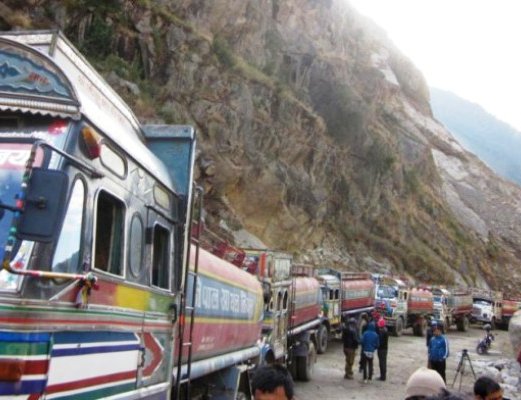 As soon as the tankers loaded with Chinese petrol lined up at Nepal-China border town of Kerung, high government officials and journalists welcomed them with a big fanfare. These 12 tankers had left the Thankot depot of Nepal Oil Corporation (NOC) on 30 October with NOC organizing a special ceremony, garlanding drivers and worshiping the tankers, in prayers for their safe journey.

Soon after the announcement by China to gift 1000 metric tons of petrol with the request of Nepalese government last week, the oil starved Kathmandu heard the buzzing of Chinese petrol.

All the tankers that had reached Nepal-China border have returned from with the petrol gifted by China. Due to a snowfall in Kerung, there was some delay in their departure.

As Madheshi Morcha activists have been staging their sit-in protest in the no man’s land between India and Nepal for more than months and Indian authorities are stopping the Indian vehicles, citing security, the supply of petroleum products has badly affected normal life of Nepal including capital Kathmandu.

Now the announcement made by the new communist-dominated coalition government, led by CPN-UML leader prime minister K.P. Sharma Oli, has entered an agreement with China to import oil, raising high hopes among the people for regularity in fuel supply.

“This is a historic event as Nepal broke the Indian monopoly in the supply of petroleum products to Nepal. These twelve tankers are the symbol of future Nepal-China bilateral relations,” said Nepalese ambassador to China Dr. Mahesh Maskey, who came from Beijing with the high level Nepalese delegation to welcome the tankers.

This was the first time for Nepal to import Chinese fuel. It has so far relied exclusively on India for its energy needs.

The consignment of Chinese petroleum products sent to Nepal has a long strategic importance in the region beyond the Himalayas, given China’s construction of strategic roads, dams and railways in Tibet.

Until recently, the Himalayas served as a natural barrier that prompted Nepal to trade more across its flat border with India.“China has opened second trade route through Himalayas which India had considered as a security wall for long. So far as the condition of road is concerned, Kathmandu used to carry petroleum products through narrow difficult Tribhuwan Rajpath for long. If Tribhuwan Rajpath sustained for so long, nothing is there to dissuade us from believing that Kathmandu-Kerung cannot be sustained in the context of availability to modern equipment,” said a former minister.

Kerung pass has historically been an important route since Nepal was compelled to sign a pact with Chinese Emperor on boundary issue when a large flock of Chinese army marched up to Betrabati, Trishuli in 1774.

In two separate agreements, China has promised to give a one-off 1000 metric tons of petroleum products as grant and signed an MoU for petroleum supply. Kathmandu sees the move as a strategic signal to India, in the backdrop of a month long disruption of supplies.

Almost 70% of Nepal’s trade is with India, a bulk of even its third country trade happens through India, and almost half the foreign investment in Nepal is from India.

The pact is likely to free Nepal of its energy dependence on India. “The MoU signed between Nepal and China will pave the way for future supply of petroleum products via Kodari and Kerung. This treaty is not against any country but to make smooth supply of products through alternative sources,” said Ambassador Dr. Maskey.

A fortnight after clearing the Tatopani border post with Tibet of the debris of the April earthquake, Nepal and China have gone ahead to reach a landmark energy deal which will transform the Himalayan country’s future energy scenario.

The agreement was possible only after Nepal sent a team of officials to Beijing, where they signed a memorandum of understanding with China National United Oil Corp, said Nepal Oil Corporation official Deepak Baral.

“Details on how much fuel Nepal will receive, prices and other arrangements still need to be worked out,” said Baral. He confirmed that the supply would be on a regular basis.

The Indian spokesperson saw the Indo-Nepal economic relations as "diverse multifaceted, deep rooted, standing on their own merit and natural logic" and noted that two-thirds of Nepal's trade is with India and bulk of the third country trade passes through India.  “Nearly half of the foreign investment in Nepal is from India," said the spokesperson.

Former ambassador and academic Prof. S. D. Muni, however, believed that the China-Nepal energy pact was a short term step which will soon cease to be a major issue once India-Nepal ties are normalized. “The Chinese are not known to sacrifice commercial interests for a long time. So the pact will not impact India-Nepal ties in a big way, though it obviously indicates that the Chinese are impatient to access the market of South Asia,” Prof. Muni said.

Irrespective of the estimate by Indian experts, it is obvious that the Nepali political class has finally hit back at India for the blockade which they believe is receiving tacit support from India.

As India’s prominent journalist Girilal Jain says in his book India meets China in Nepal. Published in 1970s, what the book described has come to be true.

After the political change of 2006, the Chinese have drastically changed their position in Nepal. With the removal of monarchy, China has come up with massive investment. Chinese engineers are building Nepal’s first eight-lane highway.

The $45 million upgrade of a road circling the Nepalese capital is one of dozens of projects helping China challenge India’s dominance in a country that is sandwiched between them.

China this year overtook India as Nepal’s biggest foreign investor, funding power plants, noodle factories and meat-processing units in one of the world’s poorest countries. Trade is also booming: Nepal’s commerce with China has outpaced that with India by 17 times since 2006, eroding the influence of New Delhi’s leaders.

Signs of China’s growing presence are visible throughout Kathmandu, including the flags that wave about the construction sites, Mandarin announcements at the international airport and a Chinese-language book shop that popped up in the capital last month.

China is already seeking a land route through ally Pakistan to the Arabian Sea as President Xi Jinping pledges $40 billion in investments along the Silk Road trading route. China in August completed a railway link near the Nepal border.

India accounted for 53 percent of Nepal’s trade last year, down from 60 percent in 2006, when a Maoist insurgency ended. China’s share of Nepal’s commerce has risen to 31 percent from 3 percent in that time.

According to Department of Industry, China’s investment pledges are worth over 9 billion Nepalese Rupees. The US dollar $90 million outstripped India’s 8 billion for the first time. Even though China has made inroads, India is still poised to gain as Nepal expands. An India-Nepal power trading pact signed in August could be a “turning point” in solving South Asia’s energy woes, Johannes Zutt, the World Bank’s country director for Nepal, saidby phone Dec. 5.

While it’s too early to say if Chinese trade will reach parity with Indian -- particularly with only one all-weather road between the countries -- the signs are promising.

Nepal signed a framework agreement with China for the supply of petroleum products. The decision substantially reduces Nepal's dependence on the Indian Oil Corporation (IOC) since about 45 years back.

Nepal has chosen an alternative supply source as India did not show any flexibility over its blockade of almost two months and the resulting fuel shortage has crippled life across the country. Nepal has looked to the northern neighbor for the essential supply after failing to make any headway in diplomatic efforts to reopen the supply from India. The Indians have been blaming the security situation in Nepal for the supply situation.

The MOU was signed between NOC Managing Director Gopal Bahadur Khadka and Vice-President of Petro China, Zhang Tong. "The agreement provides the framework for the import of petrol, diesel, and other petroleum products from China to Nepal," said a press release.

Under the agreement, China will supply one-third of Nepal's total demand for petroleum products. The decision will diversify Nepal's trade and reduce its single-country dependence on India. Nepal's fuel import from India has been above Rs 122 billion per year on average over the last three years.

Maskey also informed that the amount of fuel, prices and transport routes will be decided following a visit soon by a delegation from Petro China to Kathmandu.

Maskey, who is also the team leader of the Nepali delegation visiting Beijing to discuss the fuel supply to Nepal, said that the agreement is a commitment to long-term import and export of petroleum products between the two countries.

The deal is seen as a bold strategic move on the part of the government of Nepal, and experts believe the decision provides Nepal more bargaining power with India.

"The agreement can be good from an economic perspective as Nepal now has an alternative fuel supply," said Posh Raj Pandey, a trade expert, who however advises caution over bilateral political relations between Nepal and India.

India remains a main player in politics as it has played a decisive role to bring all the political changes since 1950, including overthrow monarchy and declaring Nepal as republic. Nepal shares culture, religion and ethnic ties with India. Even as it has plays a dominant role in all political changes, India has not received the recognition it deserves for that.

China has been adjusting with all the forces and changes which India establishes in Nepal. Traditionally, religiously, monarchy is very much a pro-Indian institution. However, communist China has maintained best relations with monarchy and India has dubbed the monarchy as a pro-Chinese institution.

In their recent articles, Indian scholars like SD Muni have revealed how radical communist Maoist Party received all kinds of logistics in India including sanctuary during 12 years of insurgency and India’s role to form the joint front of seven political parties and Maoist against monarchy. Despite India’s overt and covert support to Maoists, Indians are now blaming that Maoists are close to China.

“But my situation is by no means as agreeable as it might be if these barbarians know their own good. Instead of which they are insolent, hostile, and play off on us, as they can and dare Chinese etiquette and foreign policy. The Celestial Emperor is their idle, and, by the way, whilst I write, the Nepalese sovereign himself is passing by the residency in all royal pomp to go there miles in order to receive a letter which has just reached Nepal from Peking. There they go! Fifty chiefs on horseback, royalty and royalty’s advisers, on eight elephants, and there thousand troops before and behind the cavalcade! They have reached the spot. The Emperor’s letter, enclosed in a cylinder covered with brocade, hangs round the neck of a chief; the Prince descends from his elephant to take the epistle, a royal salute is fired, the letter is restored to the chief, who, mounted on a spare elephant, is plead at the head of the cavalcade, and the cortege sweeps back to the capital. October 22, 1833,” Brian Hodgson in Life of Briang Houghton, British Resident, said at the court of Nepal.

Although centuries have already passed as the dynasties and political situation has changed in Nepal since India established its diplomatic mission Kathmandu, nothing seems to have changed as far as the situation encountered by the first British resident and Indian ambassador. The state of affairs recorded by Brian Houghton Hodgson, the first British resident to Nepal, and that Indian ambassador to Nepal Ranjeet Ray has now may not be different. If Ambassador Ray writes memo on Nepal’s response to Chinese petrol, the difference may be in the words of the statement and that's it.