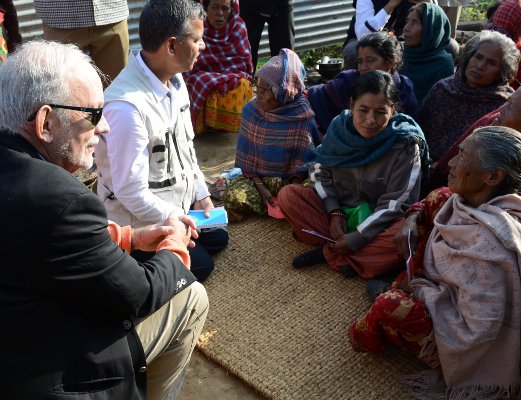 UNICEF Executive Director Anthony Lake said that there was a devastating act of nature – the earthquakes that took and damaged so many lives.  He said that now political differences among human beings are dealing new blows to the children of Nepal and the forces of nature will soon return as winter compounds the misery.

“The declining stocks of gas, food and medicines, together with the closure of schools due to political strife in the Terai plains and shortages of fuel throughout the country, are not only inflicting damage to the lives of the children now – they threaten the future of the country itself,” said UNICEF executive director Lake in his statement.

He said that he saw himself over the last days how poorly the temporary shelters built after the earthquake can provide even minimal protection from the coming winter and he said that the current harvest is weak because of light rains and cooking gas and other fuels are in short supply. “Shortages of medicines could severely impact the capacity to deal with diseases like pneumonia over the coming cold months.  A new humanitarian crisis may loom,” said Lake.

He urgently appeal to all involved to think not only of the coming winter, but of the longer term future as well. He pointed out that just in the south, more than an estimated one and half million children are out of school.

“When the doors of the schools are closed on children, they close also to their dreams and ambitions. And thus to the futures of their families, their communities and their nation,” said Lake in his statement.

ADB SUPPORT: Clean Brick Kiln By A Correspondent 1 week ago