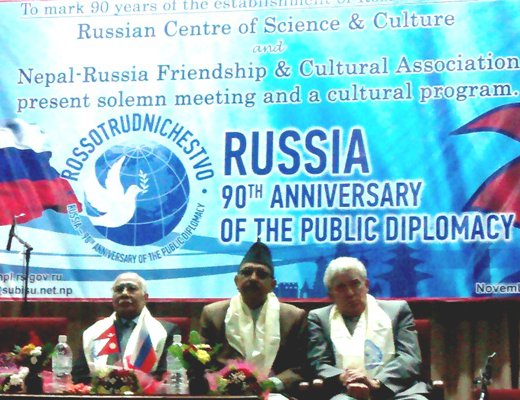 At a time when there is a growing interest in public diplomacy in strengthening the bilateral relations, Russian Federation has completed 90 years of pursuing the public diplomacy (Rossotrudnichestov).

At a function organized by Russian Center of Science and Culture and Nepal Russian Friendship and Cultural Association, speakers from various walks of life spoke about the importance of Public Diplomacy.

Charge’d Affairs of Russian Federation Voleky A. Anchkin said that Russia has been giving a high priority to public diplomacy for the last ninety years along with official diplomacy.

Deputy prime minister and minister of Women, Children and Social Welfare CP Mainali, who was the chief guest of the program, highlighted the long bilateral relations that have existed between Russian Federation and Nepal.

Director of Russian Center of Science and Culture said that this is the great occasion in Russia as the public diplomacy links people of different parts of the world with Russia,

President of Nepal Russia Friendship and Cultural Association Bhagwan Ratna Tuladhar said public diplomacy is part of the Russian Federation to enhance and strengthen the relations between the two countries.

The program was followed by a cultural event. Children of Sushila Art Academy performed the musical show in a group. The program included group songs and other musical performances.

Attended by the people from various walks of life, the program lasted for one and half hours and audiences enjoyed the musical performance.