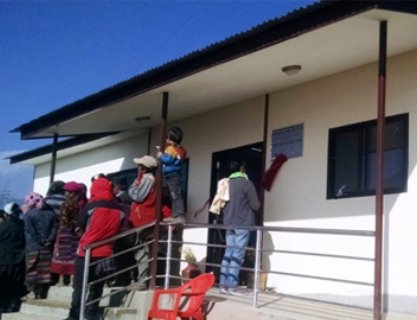 At a time when the earthquake victims are facing many difficulties with lack of health services, Karuna Foundation Nepal, an INGO, has handed over a recently built health post in Ramche, Rasuwa, 80 miles north of capital Kathmandu.

Rasuwa district is one of the most earthquake affected districts among 14 districts of Nepal. Situated in the north part of Nepal near Tibetan boarder, China, around 90% of the houses and government offices like health facilities, schools and other offices were destroyed and there were 652 deaths and 688 injured by earthquake of April.

Considering the importance of the resumption of health services, Karuna Foundation Nepalintended to build 11 prefabricated buildings for the demolished health facilities and repair three health facilities in Rasuwa for which anMoU has been signed with Ministry of Health and Population (MoHP). All the buildings are designed to be accessible and inclusive to the disabled and other populations, while at the same time awareness raising and training on disability rights and inclusion will be carried out.

Now, Karuna Foundation Nepal has completed the construction of two health posts in Ramche and Dhunce VDCs respectively. The newly constructed building of Ramche was officially handed over to MahendraShrestha, the Chief of Planning, Policy and International Cooperation Division of Ministry of Health amid in a function on 13th February 2016.  He immediately handed over the building to the Chairperson of Health facility Operation and Management committee and the man in charge of Ramche Health Post.

Besnard expressed his satisfaction for being able to help Nepal in health sector in her challenging time. He also mentioned that he was highly impressed by the resilience of the Nepalese people but further encouraged the population to be more proactive in future planning as an active agent.

C.  Van Dijkalso expressed his satisfaction on the construction progress but also reiterated that the fasterthe construction work is done, the better chance to get more international support. LiebethNagelkerker from Reachout too also spoke on the occasion.

Handing over the building to the  Government, Deepak Raj Sapkota, ED of Karuna,  thanked the people of Rasuwa for their support and cooperation and committed that Karuna will  try its level best to support the population to face the adversity they are having.  He also shared the marginalized population like disabled and senior citizens must get high priority in all developmental efforts.

Chairperson of Karuna Foundation Nepal, Govinda Prasad Adhikari committed that Karuna will always pay special attention to the most marginalized and vulnerable population i.e. the people with disabilities and their families.

Speaking on the occasion the MahendraShrestha of Ministry of Health congratulated Karuna for being able to complete the construction in time and hand it over to the system. He further mentioned that this is the first building of its kind handed over to the ministry. A total of 400 health facilities were completely destroyed, different organizations have committed for 250 facilities and this is one the first health facilities completed, he added.

The chief guest of the program ChhowangTenjingTamang, MP, thanked Karuna for  helping the people for Rasuwa in many ways and appreciated the work of Karuna there. With the completion of the construction of the health facilities, he added, the people can enjoy the services within their reach.

Leaders of the main political parties and government officials from different offices also spoke on the occasion. The cost of the construction of the building including a ramp from the main road to the facilities, equipment and others is estimated at 4.5 Million Nepalese Rupees.

Death Toll Reaches To 1500 With 2641 New Confirmed Cases In China From Conoronavirus By NEW SPOTLIGHT ONLINE 3 days, 2 hours ago 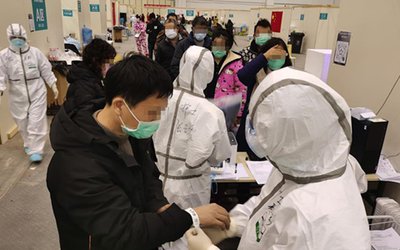