From meeting earthquake victims to families of Gorkha army and conservation of nature to cultural heritage sites, Prince Harry is covering many areas in his five-day visit 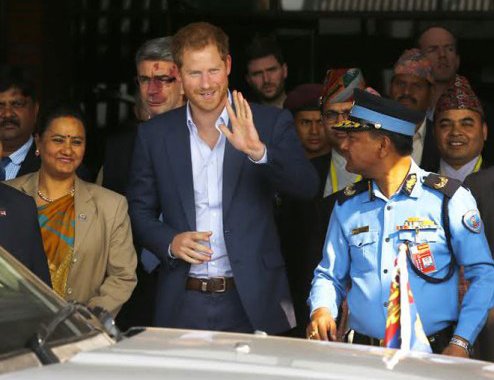 Although his visit schedule is hectic, British Prince Harry is covering Nepal’s major sectors from earthquake victims to residents of British Gorkha in Pokhara, from nature conservation in Bardia to patients at Kanti children hospital, in his five days of official tour between March 19 and 23.

Prince Harry will starting his tour from cultural heritage sites in Patan and Bhaktapur and meet the earthquake victims living in temporary shelters in Bhaktapur. Then he will visit the far-away Bardia National Park of Midwest to see tiger conservation and meet with the members of the local community.

After inaugurating the first Girl Summit, Prince Harry will take a tour to visit Gurkha families in Pokhara and stay overnight in Gurkha Trails. Similarly, Prince Harry will also visit Gorkha district where he will see the earthquake victims, recovering from the aftereffects of earthquake, again.

As all British Royal family members in the past, including his grand-mother Queen Elizabeth II, father Prince Charles and his mother Princes Diana have done, Prince Harry will visit the places making efforts to heal the people. The places of visit are diverse and the tour will ultimately enrich the existing centuries old People-to-People relations between the two countries.

“This is an official visit on behalf of Her Majesty's Government. The visit will support British interests in the region and highlight the broad and deep relationship between the UK and Nepal. 2016 marks the bicentenary of bilateral relations between the two countries,” said a press release issued by British Embassy.

“The program has also taken account of Prince Harry's personal request to meet Nepali people in a variety of environments and to experience as much of what is important to them as possible. He has a huge amount of admiration for the resilience of the people of the country, particularly in response to the earthquakes last year.  During the visit he will learn how the country has been recovering over the last 12 months,” said the press release.

Prince Harry will be introduced to the home of the Brigade of Gorkhas, saluting the extraordinary bravery and commitment that Gorkhas have shown in the last 200 years.

Along with other programs, Prince Harry will attend a reception hosted by Foreign Minister Kamal Thapa. Prince Harry will meet ministers and senior officials at this event, which will formally recognize the UK-Nepal bicentenary.

His visit will focus on the effects of the two devastating earthquakes which struck Nepal in April and May 2015.  Prince Harry will view damage to the Ancient Royal Palace and surrounding temples in Patan. He will also observe the ongoing work to restore cultural monuments through traditional craft skills such as wood-carving and gilding.

Prince Harry will also visit Golden Temple, from where the local response to the April 2015 earthquake was co-ordinated.  He will meet community members who cooked and offered shelter to those affected by the disaster.

Prince Harry will also visit Bhaktapur where he will visit a pre-positioning site for emergency supplies. The facility, which is run by the Nepal Red Cross with funding from DFID, provided assistance to 800 households during the initial twenty-four hours after the April 2015 earthquake.

Prince Harry will also visit a temporary camp for families displaced by the 2015 earthquakes. The site currently houses around 250 people, a quarter of whom are children.

After observing the restoration of cultural heritage sites in Patan and Bhaktapur, he will travel to Bardia National Park which, together with neighboring Banke National Park, forms the largest tiger conservation area in Asia.  Efforts to reduce poaching in the Park have employed smart-phone technology, which allows real-time patrol data to be transmitted to a control room. More than 700 military personnel are also involved in anti-poaching patrols.

The WWF provides technical and financial support to the National Parks and military. This enables conservation, which in turn brings in tourists, which benefits the local community.

During his visit, Prince Harry will have an opportunity to experience rafting on the Khauraha River and view tiger camera traps in the jungle. He will also visit Dalla, a local community which is benefitting from the economic potential of tourism by offering home stays to visitors.

Following his visit to Bardia, Prince Harry will travel north to the Pokhara area, where he will take part in a trek in the foothills of the Himalayas. In this breath-taking environment, he will see how Nepal's natural bounty is being carefully opened up to visitors, so that conservation efforts and tourist revenues can become self-reinforcing.

“This will also be an opportunity to learn more about the background and culture of the Gurkhas, many of whom are recruited from Western Nepal. Prior to beginning the trek, Prince Harry will meet two Gorkha families whose homes were badly damaged by last year's earthquakes. Their reconstruction has been led by the Gurkha Welfare Trust, which provides financial and development aid to veterans and their families,” said a press release issued by British Embassy.

He will spend the rest of the evening at a Gurkha home stay, where he will stay overnight. Prince Harry is hugely appreciative of this invitation, which will further enable him to deepen his understanding of the Gurkhas.

Since 1815 Gurkha soldiers have fought alongside British forces in every major conflict, gaining a reputation for bravery and loyalty. During the two World Wars there were over 40,000 Gurkha casualties, while 13 Victoria Crosses have been awarded to Nepalese Gurkha soldiers. Prince Harry served with the 1st Battalion The Royal Gurkha Rifles during his tour of Afghanistan in 2007-8, memorably observing: "when you know you're with the Gurkhas, there's no safer place to be."

During his visit, Prince Harry will watch the sunrise over the Himalayas before departing the hamlet and trekking to a local secondary school. In the aftermath of the 2015 earthquakes, the Gurkhas provided assistance to remote hillside communities affected by the disaster. The school he will see was badly damaged by the tremors and is undergoing reconstruction with help from the Gurkha Welfare Scheme. He will tour the restored facilities, meeting pupils and staff.

Prince Harry will then travel to the British Gurkha Camp at Pokhara. Pokhara is Nepal’s tourism capital and home to a large number of ex-servicemen. Equally, a large number of serving personnel originate from here or from nearby villages.

He will take part in a wreath-laying ceremony to honor Gurkha soldiers killed in service to the Crown. He will meet serving Gurkhas, veterans and their families. Prince Harry will also learn more about the work of the Gurkha Welfare Scheme and the famously grueling Gurkha recruitment process.

After returning from Pokhara, Prince Harry will visit the Sano Thimi Technical School, which provides technical training for young people. This covers practical skills including metalwork, plumbing, printing, textiles and electrical work. He will also visit the Kanti Children's Hospital in Kathmandu, where he will meet young people being treated in the hospital's Burns Unit. With support from the British-led charity, Burns Violence Survivors, the Unit is promoting greater awareness of fire safety and related precautions.

"Prince Harry is greatly looking forward to getting to know the Nepali culture and people. He was moved last year by what happened to the country following the two deadly earthquakes. But he is also conscious that, almost a year on from the first disaster, Nepal is once again very much open for business and keen to welcome back visitors. And whether trekking against a Himalayan backdrop, or rafting in a National Park, Prince Harry is extremely keen to experience for himself Nepal's natural beauty and the warm welcome of its people,” said a press release issued by British Embassy.