Hundreds of people were in the room waiting to pick up their bags. There was lots of noise; shouting, crying babies, people talking on their phones. I walked over to the designated claim where I was told my plane’s luggage would be coming through. 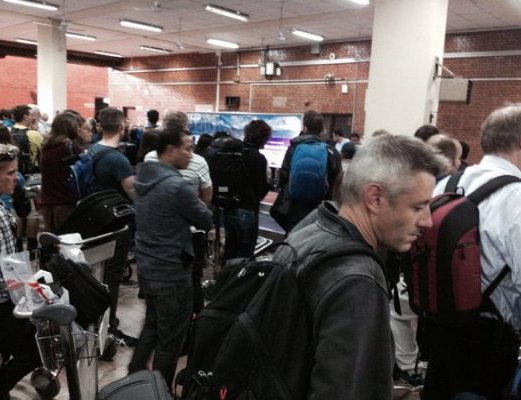 Finally, after two days of traveling, I arrived in Nepal. Once I stepped off the plane, I walked into the shuttle bus with all of the other travelers. The shuttle was a quick bus ride over to the terminal where I was instructed to follow the other westerners to find where to purchase my visa.

Everybody looked lost and confused, but we were all shepherded over to the correct spot eventually. I waited my turn, and once I reached the desk I handed the man $100. No words were exchanged. He simply took my passport and my money, shuffled through some papers, then handed my passport back to me with a pink slip. I guess that was easier than expected, I thought to myself. But now what?

I looked around the arrival terminal and walked over to another arrival. “Do you know where I need to go next?” I showed him my pink slip. He pointed me in the direction of another set of desks labeled with the amount of time people intended to stay in Nepal. I proceeded over to the three month visa desk, and handed my passport and pink slip over. Once again, no words were exchanged. The man quickly placed my visa in to my passport and ushered me through. I followed the pathway down and around winding steps until I reached one of the most chaotic places in the airport: baggage claim.

Hundreds of people were in the room waiting to pick up their bags. There was lots of noise; shouting, crying babies, people talking on their phones. I walked over to the designated claim where I was told my plane’s luggage would be coming through. I was waiting for a long time, and person after person was picking up their personal belongings. Where could my bag be? I thought, starting to feel impatient. I took a step back, and realized I had been waiting at the wrong baggage claim all along. As soon as I walked over to the correct claim, my bag was sitting there waiting for me. On my way out of the airport, a man asked for my ticket and compared it to the ticket attached to my luggage. Very smart, I thought. I wouldn’t want anybody taking my bag.

Once I stepped out of the airport, I felt the sudden energy and heat of Kathmandu. People were bustling around, waiting for arrivals, and bargaining for taxis. I suddenly became worried. I did not see the driver I was expecting to pick me up. I walked over and asked a police officer if there was a phone that I could use to call him. He pointed me over to an Ncell station, but I did not have the money to buy myself a SIM card. Thankfully, a man nearby overheard my conversation and asked if I needed a phone. I gave him the phone number of my driver, and he called him for me. They exchanged some words in Nepali, and then the man handed the phone over to me. Apparently my driver had not been expecting me until the next day.

Only forty-five minutes later and my driver was there to take me into town. A random man helped me get my bags into the back of the car. After opening the door for me to get in, the man stood there, pulled a wad of money out of his pocket and asked me, “Tips?”

I lied to him and told him I did not have any money on me. He looked frustrated, but I was instructed by my driver to not give any money. My driver officially welcomed me to Nepal, and informed me that we would be driving in to Thamel, where I would be staying my first few nights.

As we drove out of the airport I noticed that the traffic was overwhelming. Cars and motorbikes were swerving in and out of lanes, horns were constantly sounding, and traffic police were doing their best to direct traffic. I did not pay much attention to it all because my eyes were scanning the city and taking in as much as I could. There were temples, little shops, hundreds of power lines, and even stray dogs. I suddenly started feeling very excited to be in Nepal.

Once we reached Thamel, I felt my two days of travel were well worth it. My driver drove down the thin, curvy streets with expertise. I must say, I was quite impressed. Thamel felt so colorful, diverse, and creative. I was very excited to be spending my first few days exploring what it had to offer me. Better yet, I could not wait to explore all Nepal has to offer me. On arrival to my hotel in Thamel, I felt like I was in the right place. Nepal had given me a solid and resounding “Welcome”.

Reece is an intern from United States

US , German And Chinese Ambassadors Wish On Dashain By NEW SPOTLIGHT ONLINE 3 days, 5 hours ago