They settled where they could, in makeshift camps in Naubise, Bogatitar, Kalikasthan, Dhunche and Kirtipur and were told to wait until the government appoints the land for a permanent settlement, a new place to go since their ancestor’s village was n 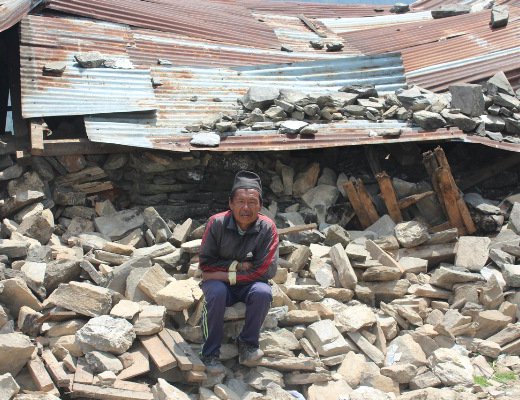 Just like nobody else in the country, the 751 families from Haku, Rasuwa, were not prepared to face the consequences of the unexpected calamity of April 25.

They settled where they could, in makeshift camps in Naubise, Bogatitar, Kalikasthan, Dhunche and Kirtipur and were told to wait until the government appoints the land for a permanent settlement, a new place to go since their ancestor’s village was no longer livable.

It has been nine months of this „permanent transiency”.

A new government has come, a new year has come, but none of them has brought along any change for the people of Haku so far.

Since April 25 the government’s policy turned out to be a chain of not even temporary solutions but short term excuses: at first the target was to survive the initial weeks until coordinated help will be provided, then to survive monsoon rains, later to survive the unofficial Indian blockade and finally to survive winter cold. A smart strategy in a way, as you tempt people with hope for improvement afterwards”, giving frog leaps from one obstacle to another, gaining time and postponing the acting, blaming external circumstances - climate or neighbors - and asking people to survive in the meantime.

In the meantime” lasts over eight months now.

Roughly this is a policy of „you are on your own so try to manage anyhow”. The state is absent. And the coordinated relief is a joke.

Would anyone expect those abandoned people to pay taxes or vote ever again?

Some politicians clamored not to make people dependent and lazy. But are the fears of developing „aid mentality” among the victims by letting the relief funds pour, really justified?

The history of over 60 years of overdependence on aid in Nepal hasn’t spoilt everyone yet. Haku is as remote as a village can be, perched on a hillside, a 4-hour walk from Dhunche, the most difficult to access of all Rasuwa VDCs. Its inhabitants are well used to surviving on their own, taking their matters in their hardworking hands.

Even after they lost their tools: those farmers were aware of the need to change the profession, gain new skills in order to survive since their farmland, the only source of their income, was buried under huge rocks of the dry landslides caused by the jolts.  It was easy to observe how eager they are to learn during vocational trainings provided them by Healing Haku Project. During the workshops on weaving and knitting that lasted few weeks, over 100 people benefited (1 or 2 members from each family).

Since the program depends on donations, due to lack of further funds it cannot reach more people willing to learn and recover their previously enjoyed financial independence.

The current situation in Europe, where most funds are being raised for this Project, is not favorable as its territory experiences floods of refugees from Syria, Iraq, Afghanistan and African countries, escaping from war, death and hunger. This is a major humanitarian crisis that challenges EU and captures its resources. In this scenario, it has become extremely hard to keep people’s concern about Nepal’s earthquake victims alive. The Europeans, overwhelmed by migratory flows happening in their own backyard, removed Nepal from the top position of their priorities and Nepalese people’s problems became far and distant.

However, Haku families don’t lay back waiting for aid. They find work in other farmers’ fields, vegetable farmhouses, and poultry farms. They collect rice, vegetables, sand and rocks; carry loads. But since the job is periodic, uncertain and badly paid, it is not enough to manage their food.

The government announced that immediate relief program has been completed. And time for reconstruction and rebuilding projects has come.

The calamity didn’t affect all Nepalese equally. This obvious fact mustn’t be ignored. Millions were not struck at all, some lost their houses but not farmland or other occupations, therefore their income sources didn’t dry out. While many are ready to go on to the next stage, those who lost it all: homes, belongings, land, job and all the crops they had stored, are left behind. The displaced people still need the basics and can’t dream of reconstruction yet. People’s different needs cannot be overlooked, treated equal and put under one-size-fits-all plan.

In the process of following blindly the instructions from the manuals on crisis response, common sense got lost somewhere on the way and the most vulnerable, who still suffer from food scarcity, are being left without support.

Besides, due to lack of political decisions regarding relocation, the villagers are in understandable confusion about not when, but whether it will take place at all.

Desperate and hopeless, having spent nine months in precarious shelters - some need to pay the rent for the land where their self-made tents are pitched – the people of Haku consider moving back to deadly dangerous and mostly not livable old village. Choosing to die in their own land instead of continuing this „permanent transiency” that leads them to nowhere.

Are they insane? No. What they are is ordinary people facing extraordinary circumstances; having been tried really hard and not assisted well enough.

Is it their carelessness that is taking them back there? Rather government’s negligence and indifference.

They have survived the first critical weeks, and the monsoon rains, and fuel shortage which immensely affected distribution of aid provided them by foreigners and the winter cold. But they hit the rock bottom and see no sense in prolonging the current no-way-out situation.

It is time to wake up, Mr. Prime Minister, and provide helpless people with adequate solutions.