With the delay in reconstruction, political disruption in terai and six months of extended trade and transit disruption, Nepal’s economic growth has nose-dived at a record level for the first time in a decade. At a time when Nepal government has pres 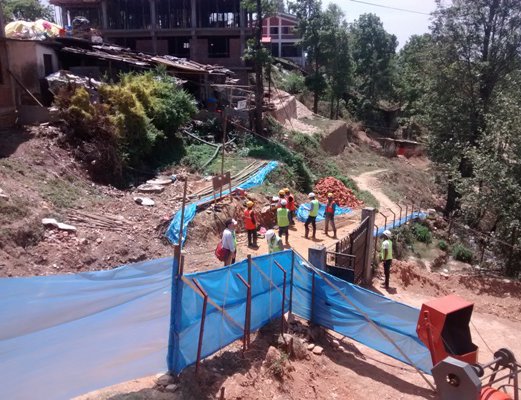 However, Prime Minister Oli seems to be little concerned about the economic health. Compared to the last year's economic indicators, nothing has changed in Nepal positively.

With the government’s capital expenditure below 20 percent, delay in earthquake recovery plan, looming political unrest and uncertainty about the life of government, no one can be sure how the overall state of economy will unfold.

Just after the prediction of three global multilateral institutions that Nepal’s overall economic growth will remain between 0.5 to 1.5 percent in the coming fiscal year, Central Bureau of Statics reveals the growth will be 0.7 percent. This is the lowest record for the last fifteen years.

Asian Development Bank, the World Bank and IMF predicted that Nepal’s economic growth will fall drastically this time due to earthquake and disturbance in the border trade.

At a time when Nepal is striving to upgrade its status from a Least Developed Country to a Developing Country by 2022, the low growth prediction will be a major setback. Although Nepal’s current level of capital expenditure is too low to translate the target, Nepal is losing its hope.

“Nepal can achieve a high growth only if it doubles capital expenditure, accelerates earthquake reconstruction and increases the agriculture production. Nothing seems to be possible now given the current state of government,” said Dr. Shanker Sharma, former vice chairman of National Planning Commission.

“GDP growth fell from 3.0% in FY2015 to 1.5 % due to earthquakes in April and May 2015, unfavorable monsoon, blinding supply-side constraints for industries, decrease in rate of remittances inflow, as well as decline in tourist arrivals and transactions at hotels and restaurants as the post-earthquake affected the services sector,” said ADB’s Outlook 2016.

Good news was that annual inflation fell. Annual average inflation fell to 7.2% in FY2015 (lowest since FY2008), from 9.1% a year earlier. Due to inflation declining in India and declining global oil prices, the inflation had fallen. However, Nepal cannot benefit much due to weak harvest in agriculture and supply disruptions due to the earthquake.

“Nepal has still the possibility to pick up in the coming years. In case of stabilization of the political climate, acceleration of reconstruction activities and normal monsoon, the growth will be 4.1 in 2017,” said Kenichi Yokoyama, Country Director, Nepal Resident Mission, addressing the press meet.

Asian Development Bank has predicted Nepal’s economic growth rate at 1.5 percent, releasing its annual global outlook report recently.  Despite the government claims about the growth prospects of 2 percent, nothing like that seems likely.

Among ministries primarily involved in infrastructure development, in the first half of FY2016, Ministry of Physical Planning, Works and Transport Management spent 15.0% of their allocated capital budget, Ministry of Urban Development had only spent 10.8%, and the Ministry of Energy had spent 2.3%.

Earthquake recovery has been dismayingly slow largely because the establishment of the National Reconstruction Authority was greatly delayed by political differences on its organizational structure and leadership. The high-powered authority—considered it necessary to fast-track reconstruction through streamlined and prioritized program planning and implementation. The authority was officially established only in December 2015 under revised legislation. While its head has been named, the organization has yet to become fully functional.

Inflation is projected to rise to 10.5%, higher than the target of 8.5% set by the central bank in its FY2016 monetary policy. Although lower global oil prices are being passed through to administered fuel prices (a policy adopted in September 2014), average inflation in FY2016 will be elevated on the combined effects of a smaller harvest, acute shortages of fuel and other essential commodities, and higher transport costs during much of the year.

The World Bank reveals that after the 2015 earthquake, Nepal experienced a second major shock with cross-border trade disruptions. This reduced economic activity, lowering growth prospects to 1.7 percent in 2016 compared to 3.4 percent in 2015. Disruptions increased inflation to double digits, affecting the welfare of the poor and vulnerable, while reducing revenue collection and slowing reconstruction efforts. Normalization is expected by the end of 2016, leading to strong rebound in 2017 with GDP expected to grow by 5.8 percent.

The prediction of International Monetary Fund (IMF) has even lowered the growth forecast to 0.5 percent. Like the World Bank, the IMF has also attributed trade disruptions along Nepal-India border points, delay in execution of post-earthquake reconstruction works, and unfavorable monsoon that will hit output of goods and services for the lower economic growth.

Though all of them have pointed out the devastating earthquakes a year ago -- on April 25 and May 12 -- and subsequent aftershocks, delay in reconstruction works due to political bickering and border obstructions for almost four months after the promulgation of constitution as the major factors that have pulled the economic growth down.

The massive devastation -- that floored around 800,000 houses, apart from cultural heritage sites, and public buildings, including schools, hospitals and police posts -- had pulled down economic growth to 3.04 per cent in Fiscal Year 2014-15, from projected 5.5 percent. The natural disaster had damaged the assets, but the India-imposed economic blockade for almost 4 months hit the income of the people resulting in heavy losses that is pulling economic growth down to around 2 percent to 0.5 percent.

The four-month blockade not only created supply disruption but also dealt a severe blow to industries and lowered consumption. On top of the natural disaster and blockade, the government also failed to spend capital budget that could have created employment and lay the foundation of economic activities and capital formation.

According to the IMF report, all these problems are expected to push Nepal to the third lowest rung of the economic growth ladder in Emerging and Developing Asia in the current fiscal year.

“According to the twice-a-year South Asia Economic Focus, the region’s economic performance prospects remain strong due to limited exposure to global turbulence, coupled with increasing investment activity,” said a press release issued by the World Bank.

“South Asia has been resilient to global turbulence due to its limited exposure to slowdowns in other major economies coupled with the tailwinds of favorable oil prices, capital flows, and remittances,” said Annette Dixon, World Bank South Asia Vice President. “However, fiscal and financial vulnerabilities remain and countries should strive to address them through generating revenue and creating more fiscal space”

Given the present scenario with prolonged political instability continuing, Nepal’s chances to achieve high growth are very low in the coming years. Even for moderate growth, it all depends on monsoon and accelerating the capital expenditure.

BHARAT RAJ PAUDYAL: Diplomat With Passion By A Correspondent 4 days, 8 hours ago

MADHAV BELBASE: The Father Of TBM In Nepal By Keshab Poudel 4 days, 23 hours ago

Hindu Kush Himalayan Region’s Ministers Come Together For The Cooperaiton On Climate Action By NEW SPOTLIGHT ONLINE 5 days, 8 hours ago

SHANKER DAS BAIRAGI: Diplomat At Helm Of Civil Service By A Correspondent 5 days, 11 hours ago