After the signing of the 9-point agreement, CPN-UML and UCPN-Maoist have started a process to hand over the rights violations cases of the conflict era to the TRC 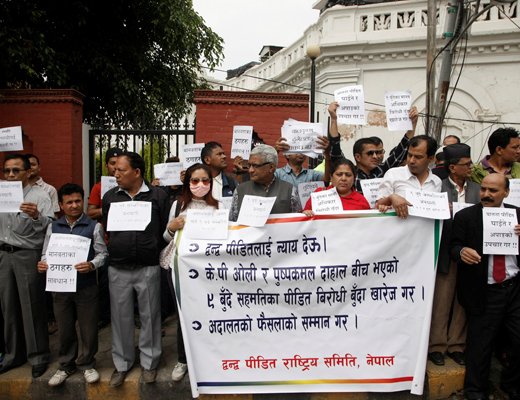 For the conflict victims frustrated by the 9-point agreement between CPN-UML and UCPN-Maoist for giving a blanket amnesty to those involved in heinous human rights abuses, the Supreme Court decision has further dashed their hopes of getting justice.

At a time when the international community members are questioning the formation of commissions, the recent decision has eroded the credibility of Nepal’s commitment to human rights.

As there is a zero tolerance on the issue of human rights abuse internationally, Nepal may face many sanctions, including restrictions to movements of Maoist leadership abroad, in case the transitional justice system fails to get established as per the international norms.

During the 12-year long violent insurgency, over 12000 people got killed, hundreds disappeared and property of tens of thousands of people was confiscated.

According to the agreement, the parties have decided to initiate the process of amending the laws, within 15 days, to work on transitional justice as per the spirit of the Comprehensive Peace Accord.

Showing solidarity with the victims of family, the International Commission of Jurists, Human Rights Watch and Amnesty International, said Nepal’s leading political parties should not bargain away justice for victims of serious human rights abuses as part of an agreement to form a new coalition government.

They said the agreement signed between the CPN-UML and the UCPN-Maoist threatened to entrench impunity for those who planned and carried out killings, enforced disappearances, meted out torture and other crimes during insurgency, just as the country’s long delayed transitional justice process was finally about to get under way.

“Provision 7, which directs the authorities to withdraw all wartime cases before the courts and to provide amnesty to alleged perpetrators, is particularly problematic,” the rights bodies said in a joint press release.

Sam Zarifi, Asia-Pacific Director at the ICJ, said the deal between the ruling parties was extremely damaging to the credibility of an already deeply-politicized and flawed transitional justice process in the eyes of victims.

“Moreover, it flies in the face of Nepal’s international human rights obligations and the ruling of its Supreme Court by trying to wash away the crimes of the conflict victims by attempting to co-opt pending criminal cases and provide blanket amnesty to the alleged perpetrators,” he added.

The rights bodies said Nepal had an obligation to investigate and prosecute crimes under international law, including torture and other ill-treatment, enforced disappearance, extra-judicial executions, war crimes and crimes against humanity.

“The political deal by the ruling parties to grant amnesty to those responsible for conflict-era human rights abuses is a callous attempt to disregard Nepal’s international treaty obligations by violating victims’ right to an effective remedy,” said Brad Adams, Asia Director at Human Rights Watch.

The applicability of an international obligation under Nepali law was reaffirmed by the Supreme Court in its 2015 decision in the Suman Adhikari case, striking down provisions of the Investigation of Disappeared Persons, Truth and Reconciliation Commission Act, that it ruled were inconsistent with international law and ordering the government to amend the TRC Act, read the release.

The Supreme Court ruled in the same decision that criminal cases already before the judiciary could not be transferred to the two commissions, confirming that the judiciary, and not the commissions, had the authority to determine the criminality of conflict-era human rights violations.

Following the decision, the wave of registering the case against the perpetrator has declined drastically questioning the credibility of TRC and Disappeared Commission.

TRC has registered 6,287 cases and the CIEDP 1,092. The TRC has been receiving more than 200 cases on a daily basis. The commission had received 125 cases on the first day, which had steadily increased up to 539.

Conflict victims and rights activists said that the amnesty cannot be granted for heinous crimes such as murder, rape, extrajudicial killings and enforced disappearances. Given the current situation, Nepal will face severe difficulties in case it withdraw the case for political gain.

Gautam Buddha Was Born In Lumbini,Nepal By NEW SPOTLIGHT ONLINE 21 hours, 22 minutes ago

Prachanda And His Group’s Activities Are Disgraceful: DPM Pokharel By NEW SPOTLIGHT ONLINE 1 day, 8 hours ago

Call For A Broader Collaboration To Stop Human Trafficking During COVID-19 Pandemic By NEW SPOTLIGHT ONLINE 2 days, 2 hours ago

FLOOD Crying Of Children By A Correspondent 2 days, 7 hours ago