With the rains closing in, Nepal Army has started the construction of temporary shelters for the victims of earthquake 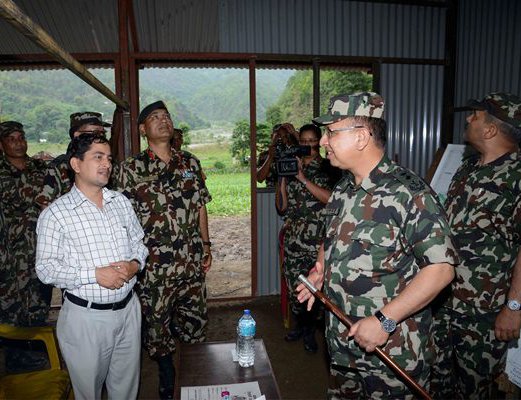 Soon after the decision of the government to mobilize Nepal Army for the construction of mass temporary shelters for earthquake victims, the national security agency mobilized its soldiers in 36 places of remote districts of Nepal.

Following an inspection, the government realized that people in the remote parts cannot construct their houses alone in the earthquake affected districts and came up with the plan to build mass temporary shelters to keep people safe in the rainy season.

“Nepal Army has already mobilized 2300 army personnel in 36 places of 11 earthquake-hit districts to construct the temporary mass shelters for over 468 family members,” said spokesperson of Nepal Army, Brigadier General Tara Bahadur Karki. “We are expecting to hand over the mass temporary shelters for the families by 24 June or at the onset of monsoon,” said spokesperson Brigadier General Karki.

Nepal Army personnel have already completed over 60 percent of the work in the areas. Due to lack of shelter, the earthquake victims in remote Nepal are living in unsafe places. As the monsoon rain has already started, the new mass temporary shelters are sure to provide them a great relief.

Just a day after the mobilization of Nepal Army, COAS General Rajendra Chhetri took a site inspection in Sindhuli and Makawanpur districts. In his address to army personnel, COAS Chhetri directed them to work hard and provide shelter for the needy people.

HOLOCAUST REMEMBERANCE Humanity Matters By A Correspondent 1 week, 1 day ago