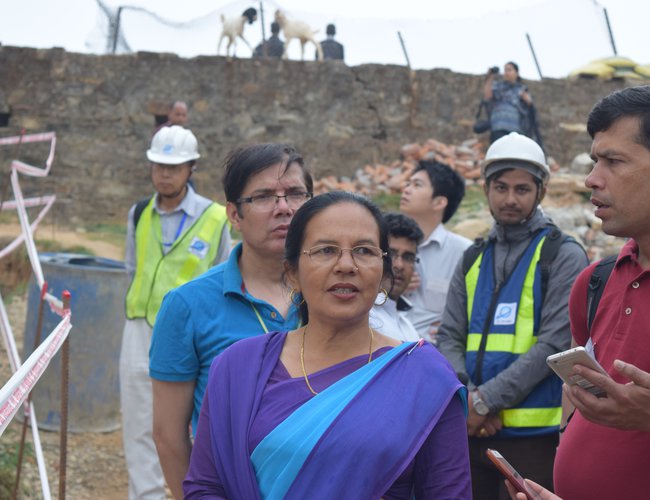 Sher Bahadur Thakuri, a resident of formerly Irkhu Village and now ward No. 8 of Chautara, Sagachwok Gadhi Municipality, Sindhupalchwok district, will not face the crisis of seeds even in case of a big earthquake another time.

With support from JICA Nepal, the construction of Irkhu Seed Collection Center is making progress at a pace raising hopes it will be completed by August 2017. As the groundwork has already completed and construction is going on, the building is likely meet the target deadline.

“The building will be a lifeline for the future as it will contribute a lot to preserve and store the seeds. We had lost houses and everything including the seeds in the last earthquake,” said Thakuri, treasurer of Deep Jyoti Women’s Cooperative. “Thanks to JICA, we will have an earthquake resilient and safe building to store our seeds.

Fifty-one-year old Amar Giri, who is a well-known mason of the area, has acquired new skills following the refresher mason training provided by JICA. Similarly, JICA’s heritage experts are sharing their views with officials from Department of Architecture to reconstruct the heritage sites of Hanuman Dhoka and Patan.

Along with Irkhu Seed Collection Facility, Agriculture Product Collection Center in Bhotechaur of Sindhupalchwok is almost at final stage of completion. Covering in the area of 252 square kilometers, the center will provide space in collecting agriculture products from nearby farmers and transporting them to markets.

Under the Quick Impact Project, 13.6 kilometers of roads from Melamchi to Bhotechaur have already been completed. This is shortest road for people to travel between Melamchi and Bhotechaur and the road can be used for transportation of agriculture products, seeds and other materials from the surrounding areas to the collection centers and markets.

“This project supported by JICA is in the interest of small farmers living in the region. Having these facilities, farmers can send their products in a shorter time,” said Sajjan Sapkota, manager of Surya Small Farmer Agriculture Cooperative. “After the completion of the building, we will have a collection center where farmers can bring their products.”

After the destruction of buildings by 2015 earthquakes, District Agriculture Development Office and District Women and Children Office in Chautara have been facing a lot of problems. Due to lack of space, both the offices are facing problems to hold the training and other activities.

“Since the last two years, we are unable to conduct the training related to women, children, and persons with disabilities. The new earthquake resilient building will increase our capacity as well,” said Nanimaiya Basnet, acting head of the District Women and Children's Office. "With the destruction of one of our buildings, we removed the women and children rehabilitation center.”

At a time when many other projects are lagging behind schedule, projects supported by the Japanese government are making progress. Being built under the Emergency School Reconstruction Project, the school blocks of Shreepath Pradarsak Higher Secondary School of Badikhel Village of Lalitpur district are also at the final stage of their construction. The four blocks of the school were completely destroyed affecting 474 students, with 287 girls.

Almost 10,000 people have been trained on earthquake-resistant housing. Out of 300 schools targeted for JICA support, 83 schools are being reconstructed in the first phase of the project.

“We are part of the reconstruction. The construction of school buildings has also sent a message around the village and the community that they need to make earthquake resilient buildings. As the local communities are working closely with the project, there is also a sense of ownership,” said Anjan Kumar Acharya, headmaster of the school. “Although our school is just 12 kilometers from Ring Road, most of the students here represent economically disadvantaged groups.”

The progress of Japanese supported projects is good in all areas. Even the rehabilitation of Aganche Mandir and Mahadev Temple of Hanumandhoka are making progress. With high historical value, Aganche Temple is regarded as a masterpiece of Kathmandu Durbar square, symbolizing the power and prosperity of ancient Nepal, particularly of the Malla period.

“We are working slowly and steadily. Reviving the old heritage sites by reconstructing with same shape and same materials is a very tedious and time consuming task. We are also learning the skills and techniques from Japanese heritage experts on how to make earthquake resilient structure,” said Hirakazi Maharjan, expert from Department of Archeology, working with JICA’s experts. “As we are almost near storing scattered materials of the old structures, the process of reconstruction is likely to begin soon.”

Experts view that the heritage reconstruction is a very complicated issue. In the city of UNESCO listed heritage sites like Kathmandu, there is a need to take a greater caution in construction works. “We have already collected and classified the materials of destroyed Shiva Temples and erected the Aganche Mandir in its right shape. Now we are finalizing the process of reconstruction,” said JICA expert Tagasugu Tai Nami Hirai.

At a time when most of the reconstruction projects are going slowly, JICA projects, which are also a bit delayed from the schedule, are making a good progress. As Nepal celebrated the second anniversary of the Earthquake, Japan has already provided US$ 260 million with 100 Japanese technicians and experts to build back better,” said Japanese ambassador to Nepal Masashi Ogawa. "Japanese government and JICA have made all efforts to satisfy people and fulfill their aspirations for Build Back Better (BBB).”

Whether the projects are about rehabilitation of the cultural heritage or emergency school reconstruction or rehabilitation and recovery after Nepal's earthquakes, all of these are making progress.

“This is possible because of our very close cooperation and coordination with NRA and other government ministries, including Ministry of Education, Agriculture and Ministry of Federal Affairs and Local Development,” said Jun Sakuma, Chief Representative of JICA Nepal.

Constructed upon the requests from district and community, there is a strong sense of ownership in the JICA reconstructed buildings and heritage sites. “Agriculture Production and Collection Center will enhance our capacity and increase the growth of agriculture products,” said Sajjan Sapkota.

Among others, there is a scarcity of skilled manpower in the district. "Although we have already trained a number of masons, there is still a shortage of skilled labor. The aim of the project is also to inject the idea among the people in building a resilient Nepal,” said Fakushima, a Japanese construction consultant, working in Sindhupalchwok.

Following the earthquake, Japan government came with various packages of support to Nepal. As other development partners, Japan also pledged to support Nepal in various reconstruction work during the International Conference on Reconstruction. Out of pledged amount of US$ 4.1 billion support for reconstruction, Japan agreed to provide US$ 320 million

Japan’s reconstruction support in housing loan is US$ 96 million partnership with World Bank by JICA. This component includes support Nepal to finance reconstruction of earthquake-resilient housing in Gorkha and Sindhupalchowk with training of masons, engineers and house owners.

Another major component is for school loan with US$ 112 million partnership with Asian Development Bank by JICA. This will support Nepal to reconstruct earthquake resilient schools, focusing on 283 large-scale schools in Gorkha, Dhading, Makwanpur, Nuwakot, Rasuwa and Lalitpur.

JICA’s technical cooperation include Rs. 2 billion for safety city and districts, resilient plan for urban area in Kathmandu valley and reconstruction plan for rural areas of Gorkha and Sindhupalchwok. Similarly, the budget will be used to review guidelines of building code, development of type and design for houses and schools, training masons, carpenters and villagers.

“Although there are many challenges in expediting recovery work, the message of BBB has reached villages where people now understand how to build resilient houses, thanks to various partners’ support. Two earthquake victims who have benefitted from JICA’s support shared their hardships, concerns and issues they have faced in rebuilding their lives.,” said Dr. Govinda Raj Pokharel, Chief Executive Officer of the NRA in a program from Post-Earthquake Reconstruction to Disaster Risk Reduction: Lessons Learned in Mainstreaming Build Back Better (BBB) in the Recovery and Reconstruction Efforts in Nepal.

At this 2-year juncture, JICA also expressed its strong commitment to play a leading role in assisting Nepal in the DRR area, including its ongoing efforts to operationalize the Sendai Framework for Disaster Risk Reduction (2015-2030) in Nepal.

Kimio Takeya, Distinguished Technical Advisor to the President of JICA, emphasized the unique contributions Japan could make to enhance DRR resilience by taking advantage of its first-hand experiences as an earthquake prone country.

The Government of Japan has committed a total of NRs 30 billion for supporting reconstruction and recovery in Nepal. Among JICA’s recovery assistance, housing and school reconstruction are the two major projects currently ongoing.

“After visiting the project sites, I have seen the progress made by projects. It is good to see change likely for the beneficiary,” said Makoto Ooyama, first secretary, Economic Cooperation Embassy of Japan. 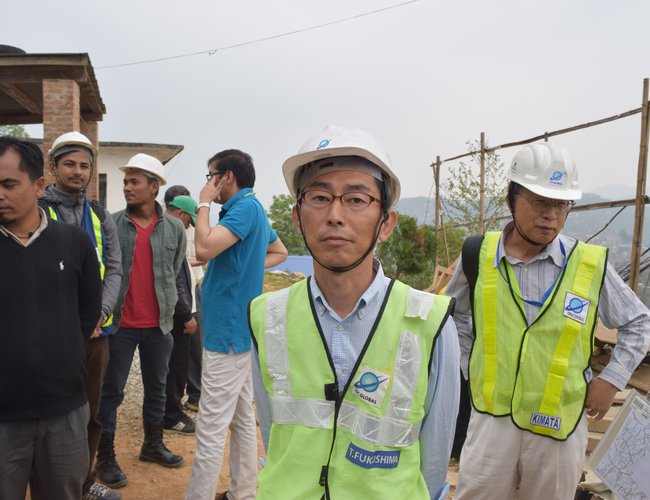 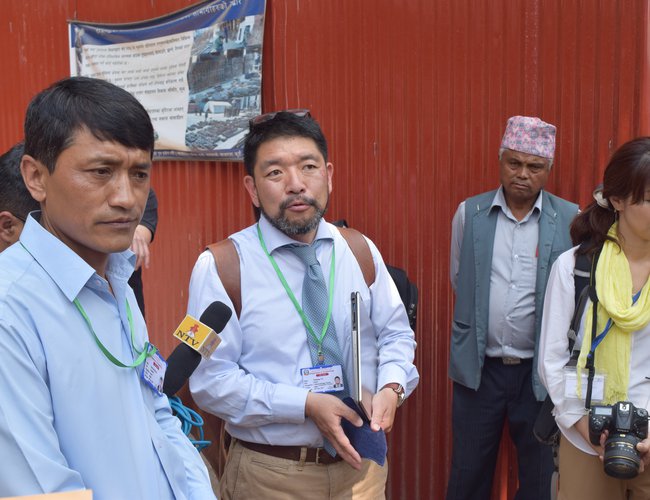