This year, we are working to host Korean cultural program in two phases, including biannual and annual. This “2017 Korea Culture Day,” was first biannual cultural program and it will conclude at the end of the year with Korean Film festival, Tae-Kwando, cultural programs and many other interesting programs. 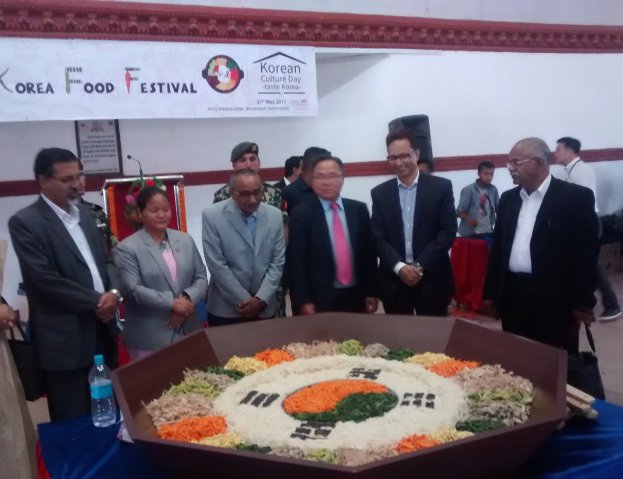 First of all, I would like to remind all of you that the Embassy of the Republic of Korea in Nepal has been organizing various kinds of cultural programs to display Korean Culture in Nepal. This year, we are working to host Korean cultural program in two phases, including biannual and annual. This “2017 Korea Culture Day,” was first biannual cultural program and it will conclude at the end of the year with Korean Film festival, Tae-Kwando, cultural programs and many other interesting programs.

To give a true sense of Korean friendship to large number of Nepalis, we have prepared three different programs. The programs include K-pop World Festival in Nepal, a program of Korean dance and music by Nepalese selected from different parts of Nepal, Korean Food Festival and Quiz on Korea.

K-pop competition involves Nepalese K-pop teams that have been selected from different parts of the country. Likewise, “Quiz on Korea” involves many delicious Korean food items. K-pop program is regarded as a worldwide program conducted through fan clubs to exchange views and enhance understanding about each other. Especially, when I see Nepalese K-pop community, which was set up by them, participating with leadership quality, what I can feel is that it has a significant importance in Nepal. Sixty seven teams took part in the preliminary stage. Twelve teams reached the last round in Nepal. After watching their performance, I find the occasion to see how Nepalese youth are greatly influenced by Korean culture and K-pop. I was deeply impressed by acceptance of Korean culture by Nepalese with all respect. I was deeply impressed to see all the participants and fans enjoying Korean culture and showing talents, without any reservation, gathered at Auditorium. This has really impressed me.

Seven Korean restaurants, which are based in Kathmandu, took part in the food festival. They prepared various kinds of Korean foods with hard work. The person who wins the Quiz on Korea here will be selected for final round in Korea. Korea and Nepal have many similarities. People of both the countries celebrate any festival with full heart, and they do have diverse foods, with various vegetables and spices. Because of this kind of similarity, Nepalese and Korean are very close. These commonalities also help Nepalese people to create conducive environment to strengthen their relations with Korea.

By hosting 2017 Korean Culture Program, Embassy of Korea in Nepal started the day of Korean Cultural Programs and we will organize many such programs in future to provide taste of Korean culture to Nepalese people. I believe that this kind of cultural program will help strengthen our existing friendly relations.

PARK YOUNG-SIK is the ambassador of Republic of Korea to Nepal. Excerpts of his statement delivered at the Korean Culture 2017 Program.

Upper Trishuli 1 Project A Litmus Test For Whether A Foreign Private Funded Project Will Work In Nepal Or Not
Nov 01, 2019
I Would Like To See Nepal Prosper Just As Korea Did
Jul 24, 2019
Prospect of Nepal – Korea Relations in the Perspective of Trade, Tourism, Investment and Labour
Dec 12, 2018
Korea, Nepal Share Warm Relations
Oct 15, 2017

Nepal Is Bearing The Disproportionate Burden Of Climate Change By BHARAT RAJ PAUDYAL 2 days, 1 hour ago

Refugees In Nepal: Recognition And Inclusion By Deepesh Das Shrestha 4 days, 20 hours ago

Nepal’s 2022 elections: a step towards democratic consolidation? By Sovit Subedi and Bishnu Adhikari 5 days, 20 hours ago

The Fantasy Of Democracy & Republic Morphing Into Delirium By Kedar Neupane 6 days, 20 hours ago