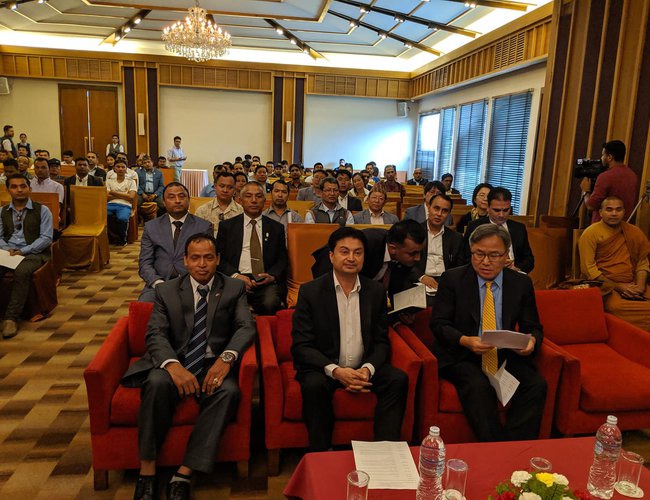 It is my great pleasure to make the welcome speech in this workshop for examining how the private sector plays an important role in economic development as well as for supporting the success of Nepal immigrant returnees. I think this is a relevant topic not just for Korean migrant returnees but for all Nepalese who return to Nepal after completing their foreign employment. From the Nepali Government data, it shows that about 4.3 million Nepalese have gone abroad for employment. This number does not include Nepalese who go to India for work.

If Nepalese working in India are included, the number could be even greater. Even in Korea, under EPS Program, about 35,000 Nepalese are working now in Korea and more than 20,000 Nepalese workers have already returned to Nepal. We all know the immense contribution that migrant workers, including from Korea, have made to the Nepali economic development. Nepal’s foreign exchange reserve is healthy because of remittance. Migrant workers sent remittance of $7.26 billion in FY 2017/18. That was about 25.1% of the nation’s GDP. The healthy foreign exchange reserves obtained mainly from remittance allows Nepali people to buy foreign goods and services.

Even in Korean history, there were several cases of migrant workers making an immense contribution to Korean economic development. From 1966 through1979, about 20,000 Korean nurses and miners went to Germany and worked very hard. They came back to Korea with savings and knowledge. Their savings was used for investment, particularly in their children’s education, which became as a source of more productive and prosperous lives in the future. Korean workers also went to Middle East to work in the oil fields from mid-1970s to mid-1980s. The Korean companies gained knowledge about oil exploration and construction technology, while at the same time workers earned money which they used for future investment.

The Nepali economy is called as remittance-dependent and import-based one. In Nepal, migrants’ money is mostly being spent on consumption which is the main reason for huge trade deficit. Nepali Government data shows that saving was only 15% of the country’s total earnings in FY 2017/18, while 85% was spent on consumption for food, education, luxury goods, rent and so on. If we include remittance, Nepal’s national savings would increase to 45%.So that means, if Nepal stops getting remittance, domestic savings would be negligible. Therefore, Nepal must make the best use of remittance.

Nepal must decrease consumption, save more and invest in projects. But building projects require productive and experienced laborers, which migrant returnees could fulfill. Therefore, that is why I am very excited to be here today to have experts who can showcase their in-depth knowledge in starting businesses.

Whenever I visit local areas in different districts of Nepal, I meet migrant returnees. Many returnees have already started entrepreneurship in small businesses like farming or bigger manufacturing sectors like juice, shoes, bags, PVC pipes, aluminum and steel rods, prefabricated houses and so on. Some returnees have made the successful transition from migrants to entrepreneurs in Nepal, but there are also many workers who are struggling to make successful transitions.

The main reason why returnees want to start their own businesses is because they want to have comparable income to what they were earning in Korea or other foreign destinations. Therefore, this workshop is very relevant, because many successful entrepreneurs and labor experts could share ideas/plans with returnees from Korea about starting businesses in Nepal. Networking is the key idea behind this workshop.

I do not believe that one workshop will solve all the problems which potential returnee workers may face in starting businesses. But they might get insights in developing new ideas and opportunities for starting a business. They might also get information on potential drawbacks or trade-offs in the process of running a company.

As a friend of Nepal, I would like to see Nepal prosper just as Korea did. Nepal has the resources and a young labor force. Just as the experts today will mention, utilizing migrant returnees’ skills and their savings would be important for Nepal’s future development.

Excerpt of the Statement delivered at the Second Workshop on the role of the private sector in the economic development of Korea, supporting the success of Nepali returnees.