The 2017 High-Level Political Forum (HLPF), convened under the auspices of the United Nations Economic and Social Council, concluded in New York by adopting its Ministerial Declaration. 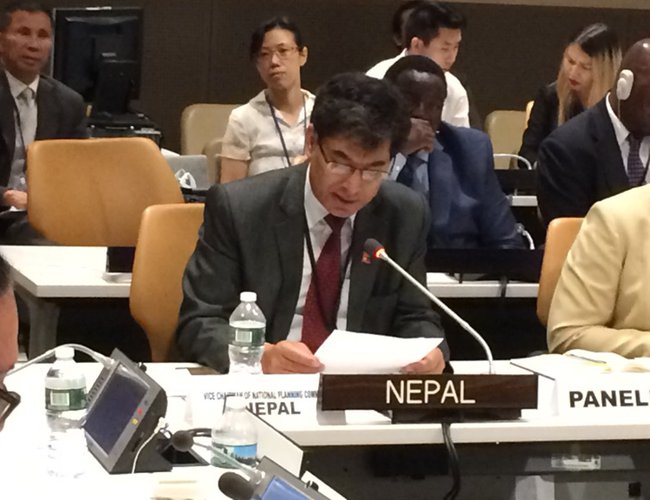 The 2017 High-Level Political Forum (HLPF), convened under the auspices of the United Nations Economic and Social Council, concluded in New York by adopting its Ministerial Declaration. Dr. Min Bahadur Shrestha, Vice-Chairman of the National Planning Commission of Nepal and the head of Nepali delegation to the 2017 HLPF attended the closing ceremony.

The Vice-Chairman also participated in a side-event entitled “Accelerating inclusive and sustainable development in Landlocked Developing Countries through structural transformation: pursuing policy at the nexus of infrastructure and industrialization” organized jointly by Zambia (Chair of LLDCs), Austria, UN-OHRLLS and UNIDO.

Speaking in the event, the Hon. Vice-Chairman said that full, timely and effective implementation of the Vienna Program of Action in synergy and coherence with 2030 Agenda with a focus on industrialization as well as resilient and sustainable infrastructure would ensure structural transformation of LLDCs.

Nepal presented its Voluntary National Review of the implementation of the 2030 Agenda for Sustainable Development on 17 July and delivered its national statement on 18 July 2017.

Tanka Mani Sharma, Auditor-General of Nepal, arrived at New York today to participate at an event “Auditing preparedness for the implementation of the SDGs” being organized by the INTOSAI Development Initiative (IDI) and the United Nations Department of Economic and Social Affairs (UNDESA) on 20 and 21 July 2017. Kamal Shali Ghimire, Secretary, Ministry of Law, Justice and Parliamentary Affairs is leading a Nepali delegation to the Preparatory Committee on developing an international legally binding instrument under the United Nations Convention on the Law of the Sea (UNCLOS) on the conservation and sustainable use of marine biological diversity of areas beyond national jurisdiction. Nepal is actively engaged in all processes related to the UNCLOS, which is related to the interest of LLDCs.

Durga Prasad Bhattarai, Ambassador/Permanent Representative of Nepal to the United Nations, hosted an informal dinner in honor the visiting delegations of Nepal at his official residence.