One must be thankful that it was the engineers of the Indian army who were given the task of building the country's very first highway. Incidentally this was also the first major undertaking of the Indian army following India's independence in Aug. 1947 and a gift to Nepal. 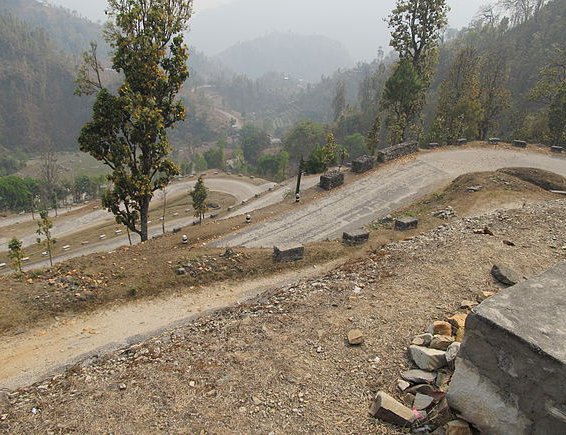 I am an oldie of sorts.  I remember the good old days when able bodied travellers climbed up Thankot and reached Chandragiri panting. The old, the infirm and the children were carried up the mountain on a wolinkath.   One had then to display ones luggage or packets to the military sentry and no female would be allowed past that point without a rahadhani.  One then trudged on to have the mid-day meal at Kulekhani and called it a day after reaching the Dharmasala at Bhimphedi.  The next day's travelling was on the bus to Amlekhganj and then on the Nepal Government Railway (NGR) to reach Raxaul.  How things have changed.  One now reaches the top of Chandragiri by cable car in comfort and in eleven minutes! The trip to Raxaul by car can be comfortably done in half a day!

With the ushering in of democracy into the country in Feb. 1951, a new age dawned for Nepal.  One must be thankful that it was the engineers of the Indian army who were given the task of building the country's very first highway.  Incidentally this was also the first major undertaking of the Indian army following India's independence in Aug. 1947 and a gift to Nepal.  It was then a matter of great prestige.  There was no shortage of comments were made regarding the Indian capability and experience.  Questions were raised about the length of this first highway of Nepal, said to have twists, turns and bends in abundance. What would be the maintenance costs?  These remarks were countered with the statement that the basic purpose was to open up as much of the country as possible.  There was euphoria in the populace at large and led to songs as 'By road ko bato ma dhulo udawundia’.  A spin-off advantage was that the capital's citizens were introduced to products such as 'Tennis shoe ko jutta' which up to then had been luxury items. Diet of the valley's populace improved with the coming in of fresh vegetables from Tistung and Palung.  Whilst this was so, a relative of mine who usually drove helter-skelter in a jeep on this Tribhuvan Raj Path used to reach Hetauda in just four hours!  A very extraordinary feat in those days.

On the debit side however is the fact that as the number of vehicles increased, the petrol and diesel bills started sky rocketing over the years.  The shortcomings of this excessively and intensively used road lessened somewhat with the opening of the Chinese aided via Mugling route.  What is still a problem is that transportation costs are high due to its length.

Road building and developments have changed over the years with the experience of the Indian aided Trisuli Highway, the Chinese aided Kodari Highway and Mugling sections of the roadway to the South.  The Japanese aided highway to Bhatakpur and the BP Koirala Highway via Badribas have provided more sophisticated information. However there is gross negligence on our part too.   How come that heavily loaded trucks were allowed on the Badribas road when it was meant for light vehicles only?  Even when the road has been damaged heavy vehicles still continue of ply on it!

It has been said by many aid givers to Nepal that the Nepalis are good at formulating plans, but are very poor in implementing them.  One has only to look at the track records of the roads and bridges making processes on a countrywide basis.  The practice is to lay foundations, but the road or bridge for the use of the populace has been left in limbo or uncompleted for years.  The truth is that politically backed contractors take the funds, start the process of construction and then feigning rising costs tend to disappear.  Why is this occurring again and again?  No one has ever been bothered!

The Nepali Army has taken over this task of constructing the road from the capital to Nijgadh.  It has had some experience in such undertakings over the years and the completion of the Karnali Corridor road is held up as an example.  True therefore that our army engineers and sipais have had some experience in such undertakings over the years, but one can't claim that work has always been completed satisfactorily and on time in all circumstances, even by them.  Why does this lack-a-daisical attitude persist in the road builders and the authorities who authorise them?  The budget has finally been sanctioned for the road to be built over four years. The time clock is ticking.

It was in 2010, that the intention to build the Kathmandu - Terai Fast track by Build, Operate and Transfer (BOT) was first thought about.  Various proposals were invited and decisions taken which has been found in retrospect to be not beneficial to Nepal.   The project which, as per the National Planning Commission was to start in 2011 and be completed by 2018 has seen only 7.8% completion.

Now that our army has been given responsibility for the task, one hopes that the work will be done.  One anticipates that this 76 km highway to Nijgard will be completed in the stipulated period.  It is slated to have 99 bridges and six flyovers and the travelling time is forecast to be 59 minutes! What a saving in time, money and energy for our Nation and for all of us.  Our petrol and diesel bills will reach rock bottom.  In retrospect I am reminded of the one hour I spent as I travelled from the airport at Narita to the centre of Tokyo many years ago.  If this envisaged Fast Track to Nijgadh becomes a reality the common Nepali dweller will soon attain the objective of a developing Nation with some of the facilities that are available in countries of the developed world.  Let us all hope that this comes to pass.

Book On Nepal, India And China By A Correspondent 2 weeks ago