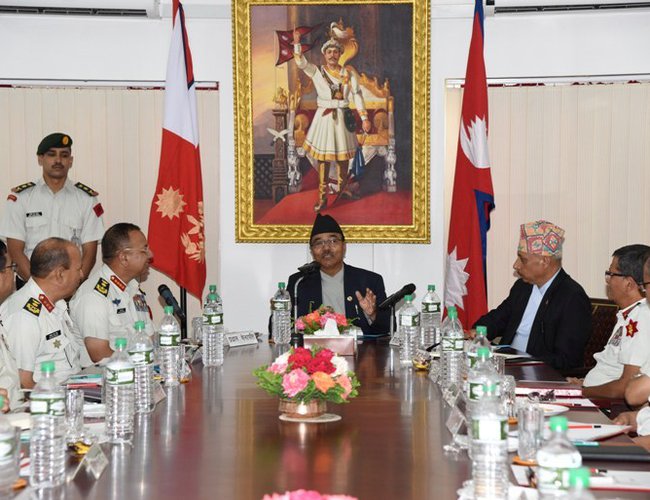 With its contribution in nation building, international peacekeeping and national security, Nepal Army has proved itself as a dependable institution for all people and in providing the much-needed stability to the country.

Although, from the opposition benches, Nepali politicians have always expressed suspicion over the role of Nepal Army, they have defended the institution when they are in the seat of power.

Despite Army’s contributions, its annual budget is barely enough to pay the salary. Army has been providing the benefits and some other minimum facilities to its soldiers and retired personnel through its own resources from UN peacekeeping operation.

“Nepal Army has shown its professionalism in international peace keeping despite its lack of necessary resources. Nepal Army has established itself as a trustworthy institution of people, accepting political changes of different periods in Nepal’s history and fulfilling its responsibility under the legitimate political leadership,” said Pradhan in a briefing program organized by Nepal Army.

He said that Nepal Army’s Institutional arrangements need to be revised under the guidelines of National Security Policy and Federal Structure under Comprehensive Strategic Review.

Defense Minister Pradhan also highlighted Nepal Army’s role in disaster management including rescue, relief and rehabilitation and stressed the need  to strengthen itself in this area as well.

Chief of Army Staff General Rajendra Chhetri highlighted the role played by Nepal Army in international peacekeeping. COAS General Chhetri said that Nepal Army has established itself as the most reliable and credible troop contributor.

During the program Lieutenant General Baldev Raj Mahat expressed gratitude to the defense minister for taking part in the briefing. During the briefing, defense secretary Shreedhar Sapkota and other high level army Generals were also present.

Be it in peacekeeping, disaster management, national security and development activities, Nepal Army has been playing a very important role. Pradhan’s assessment of army's work and his pledge of support to it were quite optimistic, too. However, it remains to be seen how he will keep his promise.

European Parliamentarian Delegation: Visit For Cause By NEW SPOTLIGHT ONLINE 4 days, 23 hours ago