As the tenure of the current Legislature Parliament will expire on October 21, the legitimacy of caretaker government will then be questioned 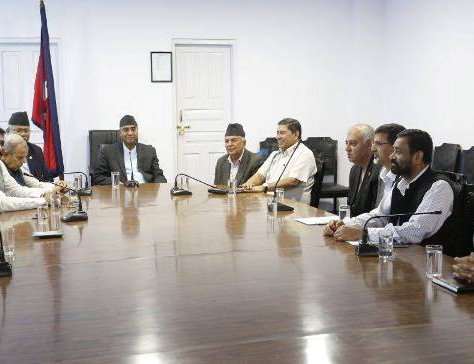 With the announcement of poll for central parliament on November 26, filing of nominations on October 22 and the expiry of the tenure of Legislature Parliament on October 21, the current government will have turned into a caretaker for the polls. The debate has already started on what will be the constitutional position in case of failing to hold the elections on November 26 and December 7?

Although leaders of major political parties reject any possibility of a constitutional deadlock, some constitutional lawyers have already raised the questions.

It will be too hypothetical in the current situation to raise the question when all three major parties are preparing for the forthcoming elections with all their strength. However, given Nepal’s past experiences of elections, with last minute postponement, that resulted in the derailment of 1990 constitution in 2001, nothing can be ruled out.

Whether it is a coincidence? Sher Bahadur Deuba was the prime minister now, who recommended the dissolution of the House as well as the postponement of the elections in 2001. This time around Deuba is in the Prime Minister's chair again.

After a series of consultations among the political parties and with the Election Commission (EC), the government has set November 26 as the date for both parliamentary and provincial assembly elections.  Although all are expecting and overenthusiastic on elections, advocate Deependra Jha, in his recent article in Kantipur, questioned several constitutional aspects challenging the very existence of this government following the expiry of the tenure of parliament on October 21.

Although the constitution has a provision requiring completion of all three sets of elections--local, provincial and parliamentary-- by January 21 and life of parliament was up to January 20, the decision to hold the elections on November shortened the tenure.

“The current prime minister will be there till the formation of the new parliament. I cannot think otherwise,” said former chair of CA Subhas Chandra Nembang. “I am confident that there will be elections of two rounds in stipulated dates.”

Although Article 298 (10) said the prime minister continue till the appointment of new prime minister, this will give life to current Prime Minister Deuba. However, the article has not said anything whether the prime minister should tender resignation or stay till the new elections. “Whatever the provisions, the current government will continue as a care taker government till the formation of new government,” said Nembang.

At a time when there is so much politics in all sectors, prime minister can give favor for someone and go against somebody. “There is the need to have a strong role for president in this context. The current decision of prime minister to expand cabinet after announcement of elections code indicated that the government can go to any extent to maneuver the elections,” said Jha. Election is going to be held in 31 mountain and hill districts on November 20 and, in the remaining districts, in the second round, on December 7.

Divided on the ideological basis, Nepal’s whole spectrum of politics is very much polarized. There is also a tradition of manipulating the elections by those who are in power. Although currently President Bidya Devi Bhandari is going to be stronger following the dissolution of house, she can check prime minister Deuba’s act.

In the past, after opposition from major parties, then Prime Minister Dr. Babauram Bhattarai had resigned and then president Dr. Ram Baran Yadav appointed chief justice Khil Raj Regmi and chair of the elections government.

At a time when main opposition party CPN-UML is criticizing Nepali Congress and Maoist Center Government for their growing intervention in administration and transfer, one cannot rule out the possibility to form another caretaker government with an initiative of president Bhandary.

As there will be only 69 days to prepare for provincial and parliamentary elections by the time the third round of local elections results begin to come out, political parties will have hectic period.

As Nepal's elections are getting costlier in recent days, there is a possibility of misuse of resources by the ruling parties. In these circumstances, no one can rule out the possibility of CPN-UML calling the neutral government as it proposed four years ago at the last minute when the government continues to ignore the code of conduct.

NCP FEUD Beginning Of End By A Correspondent 1 week, 1 day ago

NCP FEUD The Beginning Of The End By NEW SPOTLIGHT ONLINE 3 weeks, 2 days ago