Passing The Baton Within The Family

But as India continues to ride the BJP wave, the way ahead for the Gandhi scion will not only be challenging but a test of his personal aptitude; something which he is yet to prove. 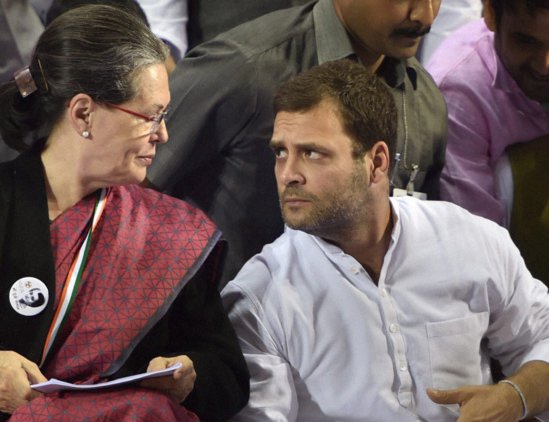 Taking over the mantle from his mother Sonia Gandhi, Rahul Gandhi is now the President of the Indian National Congress.

Rahul, who has been the Congress' vice-president for almost five years, filed nomination papers at the party's 24 Akbar Road headquarters in Delhi as the party sought to emphasise that he is being democratically elected. He did get elected, unopposed.

But as India continues to ride the BJP wave, the way ahead for the Gandhi scion will not only be challenging but a test of his personal aptitude; something which he is yet to prove. Every since foraying into politics in 2004, when he won his first ever elections in Congress’s traditional bastion Amethi, rivals have often accused him of being a beneficiary of dynastic politics. Such criticisms grew louder after 2007 when he was appointed the General Secretary of the party bypassing many other senior leaders who deserved the post.

On his part, Rahul himself has not achieved anything to silence his critics. He passed in his first test in 2009 when he campaigned for the Congress during the Uttar Pradesh state elections. The Congress, which had been struggling in the state, won 22 out of 80 seats, its best show in years. But apart from this short lived success, he has been a complete failure. As an active campaigner for his party in many of the successive state election, his performance has been a fiasco. The Congress has lost about 25 elections ever since Rahul was made the party Vice President in January 2013. What was hailed as his litmus test, in the 2014 general elections, his party suffered a crushing defeat at the hands of BJP. His disappearance following the loss and his reluctance to take the blame of the defeat led many to accuse the younger leader of being a ‘reluctant politician’.

With such a terrible report card in his hands, how will Rahul revive the Grand Old Party? Will he ever accomplish that feat?

As BJP maintains a steady popularity amongst the mass winning almost every state elections on its way and eyeing a victory even in the 2019 general elections, reviving the party’s popularity is definitely no easy feat for the new President. The results of the two state elections, that of Himachal and Gujarat, is less likely to bring Congress any respite. Pre-polls and critics both expect the BJP to win comfortably in both the states. This will be a further blow to Rahul, who almost single handedly campaigned in Gujarat.

This means Rahul will have to focus on the long road ahead. Often criticized for his poor communication skills, his inability to connect with the mass and reluctance to challenge government policies, he needs to focus on all of these. His  criticism of Modi’s demonitization and Goods and Service Tax (GST) did earn him some brownie points but he needs to do more of those. His frequent campaigning does seem to have improved compared to previous years where he often misquoted simple facts and delivered embarrassing speeches.