As Nepal is seeking foreign investment in energy sector, the decision of NEA to sign PPA with Upper Trishuli-1 in dollars is a breakthrough 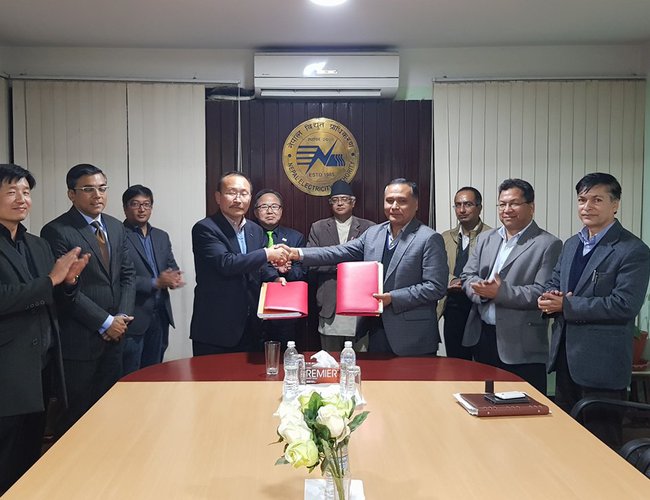 As Nepal’s demand for electricity is growing fast, there are a few options left before NEA: either import power from India or sign PPA on a dollar to allow foreign companies to invest.

In the presence of the secretary of Ministry of Energy and ambassador of Korea to Nepal, NEA MD signed PPA with Trishuli III 1 ending the prolonged uncertainty about the project. The presence of Korean ambassador is understandable as this is the first big project invested by a Korean Company. Though a number of Korean companies have been investing in Nepal, this is the first in the energy sector.

With cash crunch from time to time, the development through investment from the national financial institution is a risk and huge cash consuming hydropower is impossible. Importing over 16 billion rupees equivalent of electricity from India and over 150 billion rupees of fossil fuel, signing the PPA in the dollar is economically more beneficial in long term and short term.

Haunted by previous experiences and opposition from a section of people, Nepal Electricity Authority had stopped signing the PPA in the dollar. This badly affected Nepal’s energy production. However, NEA’s recent decision to sign PPA in the dollar with Upper Trishuli-1 Hydroelectric Project is a good gesture. A project of 2001 can save annually 7 billion rupees trade in favor of Nepal.

After an intense study on pros and cons of the project, Nepal Electricity Authority (NEA) — the country’s sole power off-taker — has finally decided to sign the power purchase agreement (PPA) with 216-megawatt Upper Trishuli-1 Hydroelectric Project.

In the last five years, the South Korean company have already spent millions of rupees in the project site. With dilly-dallying over the years, the company lived in uncertainty.

Similarly, Nepal also imports 150 billion equivalent petroleum products in the country and this kind of project will help reduce the import of oil producing the clean energy.

The recent board of directors meeting has decided to sign PPA with the South Korean developer. NEA moved the proposal forward following the company's acceptance of the tariff structure offered by NEA, said Kul Man Ghising. “We have taken the decision limiting the damage and it is in the best interest of NEA.”

“The power utility will make payment in dollars for the electricity generated by the project for the first 10 years or till the payback period of the foreign loan since the commercial operation date (COD), whichever comes first,” said Ghising.

NEA Managing Director Ghising said that PPA in USD is to support foreign investors to pay back the loan obtained from international financial institutions. International Finance Corporation of the World Bank Group is 15 percent equity partner in this project. After 10 years or a payback period of the foreign loan since COD, NEA will make payment in Nepali rupees like other local developers.

“NEA has offered tariff per unit of Rs 8.40 during the dry season and Rs 4.80 during a wet season. The tariff provided to Upper Trishuli-1 is similar to other run-of-the-river (RoR) projects, developed by local developers. The dry season is understood as the months between December and May and a wet season from June to November,” reports The Himalayan Times.

The media reports say that the NEA has signed the PPA based on the calculation of 17 percent return on equity made by the developer. If the return on equity is found to be higher than the estimation during the audit after a year of commercial operation, NEA will revise tariff accordingly, as per Ghising.

Total energy generation capacity of the project is 1,533-gigawatt hours per year and developer will supply 39 percent of the total energy during the dry season.

As per the rule of Ministry of Energy (MoE), foreign investment projects must have 20 percent of the total project cost as equity and they can obtain up to 80 percent of the cost as a loan. NEA will sign PPA after the developer submits Rs 216 million as performance guarantee to the utility. There is a provision of tariff escalation by three percent per annum for up to eight times after project starts power generation. The MoE had signed the project development agreement with the developer on December 29, 2016.

Following the controversies in Khimti and Bhotekoshi Hydropower projects in which NEA has been facing a huge loss due to appreciation of US dollar, NEA has chosen a more scientific way to bring foreign direct investment to exploit country’s abundant hydro resources, which offers PPA in dollars only for payback period of foreign loans or maximum 10 years.

Meanwhile, NEA has urged the government and Nepal Rastra Bank to set up hedging fund to bear risk caused by fluctuations in US dollar. Hedging cost and premium will be borne by the government, NEA, and developer, as per NEA.

Among them PPA rate of three projects in operation — Khimti, Bhotekoshi, and Marsyangdi — has been fixed at Rs 10.95, Rs 11.16 and Rs 7.35 per unit. Tariff given for the Lower Solu in wet and dry seasons is similar to other RoR projects and the NEA is liable to pay 55 percent of the bill in US dollars and 45 percent in Nepali rupees.

Likewise, in Kabeli A, PPA rate is $6.2985 per unit and 60 percent of the bill amount needs to be paid in dollars and rest in Nepali rupees. The PPA for Rasuwa Bhotekoshi is similar to that of Upper Trishuli-1, as per NEA.

Given Nepal’s own economic capability, there is also the need for foreign investment in power sector. Once investors invest in dollars, they will naturally demand PPA in dollars. As NEA MD Ghising said they will take proper precautions not to allow any harm in the short term and long term and this new proposed PPA may come as a benchmark for future agreements.

BEEN Energy Efficient Building By A Correspondent 10 hours, 45 minutes ago