In the last one decade, Nepal-India foundations have been shaken one after another. The recently proposed EPG draft is likely to demolish the remaining foundations 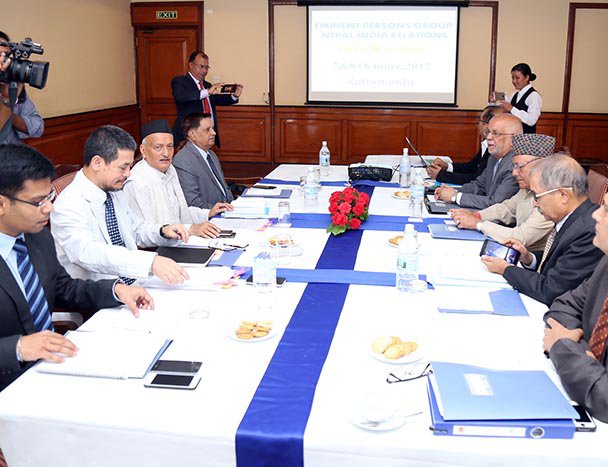 Elephants from India's Northeastern State of Assam visit Kosi River for swimming on an annual basis. Similarly, Nepal’s tigers from Bardia, Chitwan and Banke National Park travel across the national parks of India.

Similarly, people living on each side of the border do have family relations and millions of religious devotees from both the countries visit Nepal and India regularly. Governments and regimes have changed from time to times, but nothing has changed in the state of religious, cultural and natural relations across the border.

The global context and regional context may have changed from time to time. What cannot change, however, is the geographic reality. Nepal-India relations are no an exception. Connected by the land, river, and forest and divided by the political boundary, created by modern nation-states, Nepal and India have had a harmonious relationship, when it comes to their religion, culture, and civilization.

For a time immemorial, the landmass of the south of the Himalayas has been jointly shared by all kinds of animals living in the area. Wild animals like elephant, rhino, and tiger cross the areas without knowing the political boundary. Similarly, tens of thousands of people and cattle cross the political border all the while.

Published in 1995, the book, India and Nepal, A Changing Relationship, by renowned Indian scholar S.D. Muni describes the importance of Nepal and India relations in a way that is relevant even today. “The geographical continuity between India and Nepal make them a part of the same ecological system, which is increasingly becoming a security parameter in its own right. The two countries can ignore or underplay this reality only at a considerable cost to their future development and even survival,” writes professor Muni.

At a time when there are growing concerns over the weakening of strong foundations, a recently exchanged draft by Eminent Persons Group (EPG) is likely to demolish all the remaining foundations, built on ecology and nature.

Nepal India relations have not been just at the formal level, based on political and geographical boundaries of the two nations, they are much deeply rooted in culture, religion, and way of life.

Nominated by the formal institutions of states, the so-called members of EPG rarely have the understanding of this deep-rooted feeling of people of both the countries.

Although Nepal’s EPG members were nominated during the tenure of present communist prime minister K.P. Sharma Oli and so-called rightist foreign minister Kamal Thapa, all members have a communist background and anti-India orientations, which have nothing to do with the reality of nature.

Whether he wrote this piece knowing the recently exchanged draft or otherwise, Prashanta Jha, a Nepali journalist based in New Delhi, aptly drew the conclusion in his column in Hindustan Times predicting “up north: in 10 years, a new Nepal with a new neighbor, aptly describes the situation.”

If the present draft, which is still kept a secret, reportedly agreed by both the delegations, gets a go-ahead, the centuries-long deeply rooted foundations of Nepal and India will be demolished forever.

For an overwhelming majority of Nepalis, the proposed draft, orchestrated by a group of Nepalis, who do not believe in Nepal-India’s deep-rooted cultural and religious ties, will give much pain. It is yet to come to the public how India, which is aspiring to be a global superpower, looks at it.

For the communists and a small group of extreme rightists, Nepal India Peace and Friendship Treaty 1950, which gives the continuity to centuries-long relations of both the countries, remains an objectionable agreement.

Although Nepal and India are two independent countries, divided by a political boundary, in terms of civilization, they are one, never separated. The recent visit of Nepal’s last King to a great Hindu Temple in Odisha is a testimony of the civilizational connection of Nepal-India relations.

In his word, late Leo E.Rose wrote in his book Nepal: Profile of The Himalayan Kingdom,“ the interaction of a variety of cultural and intellectual influences originating in India is vividly apparent in all aspects of Nepali culture over at least two millennia.”

With the communists dominated team and communists with an absolute majority in central parliament, Nepal’s EPG concerns will be to replace the Peace and Friendship Treaty, rather than to help reset Nepal India bilateral ties, based on the two countries’ religious, cultural, civilizational and geographical realities.

Although both sides agreed to go through their respective reports and come up with a final conclusion with one joint report, one can see a little hope that the new proposed draft will continue to keep the foundations of the two countries and harmony of our civilizations.

According to media reports, the draft presented by Nepal outlines what to do next on pressing issues like the 1950 Treaty, trade, commerce, transit, water resources, areas of cooperation, economic assistance and socio-cultural relations, among which is a new blueprint for Nepal-India ties in the changed context.

A Nepali participant told on condition of anonymity that the tone of the Indian side has dramatically changed after results of Nepal’s elections.

“Wherever we’ve reached so far, we cannot term the development anything else, but positive,” said Bhekh Bahadur Thapa, Head of Eminent Persons Group from the Nepali side.

Although India is yet to make any comment publicly, the Nepali participants said the EPG has agreed to recommend replacing the peace and friendship treaty with a new one. On the issue of security, particularly on purchasing arms from a third country, the Nepali side has proposed that Nepal will only “inform” the Indian side about the deal, but will not take consent as required by the 1950 Treaty and the subsequent letter of exchange.

“We have not missed any issue. In fact, we have even gone beyond our mandate in terms of the subjects of discussions so that the bilateral relations are harmonious,” he said. “Today, we are very fortunate and very lucky that we are about to reach a conclusion where every one of us will be happy. I can assure you that from the side of the Government of India,” said Bhagat Singh Koshyari, BJP leader and coordinator of the EPG from India.

“The 1950 treaty might have been signed to avoid any misunderstanding in the relations and that the relations could continue without any problem. But time and circumstances change. New types of problems arise and sometimes there are uninvited questions. The solution is dialogue,” he said, adding that that’s why the prime ministers of the two countries took such an informed decision to constitute the EPG so that people-to-people talks could be held apart from regular government-to-government talks. “Our aim is to bring right perception about any misunderstandings, and plug any holes in the relations.”

On the issue of regulation of the open border that is often called a hallmark in bilateral ties, the EPG is going to suggest to both governments on fixing the numbers of entry and exit points at the border so that citizens from both sides are not affected.

According to the sources, the numbers of existing Nepal-India entry and exit points will come down. Apart from fixing the entry and exit points, the EPG is also going to suggest that both governments check and maintain records of people traveling to both sides and make valid identity cards mandatory.

Professor Lok Raj Baral’s view expressed a year ago with New Spotlight is relevant in the present context. “Our relations are multi-dimensional. However, our experts blame 1950 Nepal India Treaty for all the ailments. What I have been saying is that, whether there is the treaty or no treaty, Nepal India relations remain the same provided India continues to work under treaty obligations. If there is no treaty, India can ask you why it should provide any special treatment. They can pursue MFN like all other nations. In that scenario, what would be our situation? Without understanding and studying all those implications, making any change will bring unimaginable impacts to Nepal,” said Baral.

Of course, a few people here and there can suggest any proposal, what will principally prevail is the reality. The fact is that there are no countries in the world but Nepal and India, which share so many commonalities.

UNICEF REPORT: Children Suffering By A Correspondent 1 day, 14 hours ago

Aaphailai Khojda: Confessions Of A Professor By Keshab Poudel 2 days, 14 hours ago