With the induction of four ministers, K.P Sharma Oli has managed the inner party disputes for now. However, the deteriorating relations with the opposition is likely to bring a backlash 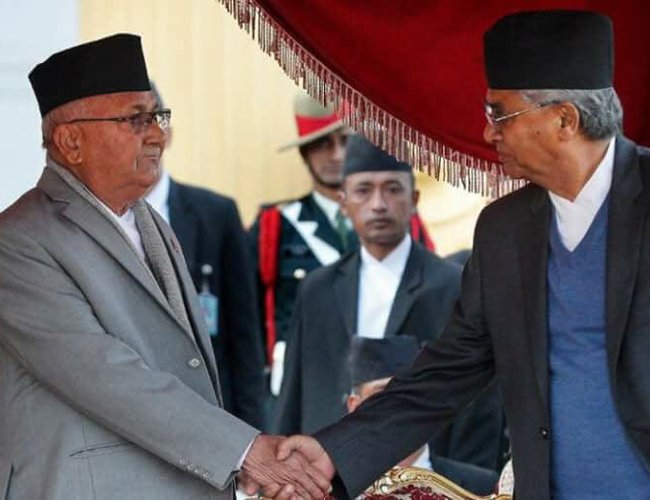 After picking two names each for ministers, Prime Minister K.P. Sharma Oli and Maoist Center chair Pushpa Kamal Dahal Prachanda showed that they have managed the internal dissension for now.

As the two cautiously chose the names of ministers, leaders of the main opposition party Nepali Congress unanimously criticized the move of Prime Minister Oli and President Bidhya Devi Bhandari for withdrawing the three members of National Assembly nominated by the NC government.

Although these two incidents related to two different circumstances, they indicate that Nepal’s politics will be more disruptive in the days ahead, given the visible sign of confrontation between the ruling communist alliance and main opposition Nepali Congress.

PM Oli’s recent announcement to issue a whitepaper about the economic state of the country and reverse and review some populist decisions taken by previous government led by Nepali Congress is likely to spark the confrontation.

If the communist alliance led by PM Oli continues to take decisions to irritate the opposition, a major showdown will be likely in the center as well as state parliaments between the ruling and opposition party.

As Nepal has entered into a new phase of state restructuring, a harmonious relationship with the main opposition is required to smoothly pass the bills and move ahead on other matters.

Although the K.P. Sharma Oli led Communist alliance has nearly the two-thirds of majority in the central parliament and thumping majority in six provinces, main opposition Nepali Congress too has a formidable presence in all the provinces including in the center to disrupt the parliamentary proceedings.

Passing through a wound of humiliating defeat in the elections by the communist alliance, Nepali Congress leaders are in no mood to compromise on fundamental issues. They have already made it clear that reversal of any decision taken by them is unacceptable.

Nepali Congress has already brought its sister wings in the street to protest the move of president Bhandari. The students union and other sister wings held demonstrations chanting slogans against the president and Prime Minister Oli.

“Nepali Congress will play the role as a responsible opposition. However, we will not allow the communist government to impose a dictatorial rule,” said spokesperson of Nepali Congress. “If the government starts to violate the law and constitution, we cannot remain a mere spectator.”

Despite differences in the party over the leadership, there is a consensus in Nepali Congress over the need to check the present communist-led governments in the center and states.

Although the opposition is flexing its muscle, Prime Minister K.P. Sharma Oli led CPN-UML and Maoist Center coalition has felt a sigh of relief as the ruling parties have managed their internal rebellion for now.

With a hope to include Upendra Yadav-led Federal Socialist Forum Nepal (FSFN) into the government and garnering a two-thirds majority for the ruling coalition, Oli has not given a full shape to his cabinet at its first expansion.

With the new constitution limiting the cabinet size to 25, the new government had reduced the number of ministries to 18 from 31, counting the Office of Prime Minister and Council of Ministers as a separate ministry.

A former governor of Nepal Rastra Bank and vice-chairman of the National Planning Commission, Khatiwada is a monetary economist. He will be the first to head the Ministry of Finance in the government formed after the full implementation of federalism in the country.

Defense Minister Pokharel has briefly headed the Foreign Ministry and Commerce Ministry in the past. UML General Secretary Pokharel will be second in the hierarchy in the Oli-led cabinet.

Thapa, who headed the Defense Ministry in the cabinet led by Maoist Chairman Dahal after the first CA election, was a strategic commander of the Maoist combatants during their decade-long armed insurgency and also party general secretary.

Industry and Commerce Minister Yadav came into limelight during his tenure as Forest Minister in 2008 after he locked up the local development officer of Lalitpur inside the toilet over a row concerning the crusher industry.

Both Thapa and Yadav had severed their ties with the Dahal-led Maoists right from before the dissolution of the first CA. They merged back with the mother party after the promulgation of the new constitution in 2015. Dahal has now rewarded the former breakaway leaders with cabinet appointments in the first cabinet expansion.

Though the government is yet to take a full shape, Oli is not planning to induct any deputy prime minister into his government, according to UML leaders.

Out of six provinces, the ruling alliance has also smoothly chosen chief ministers, ministers, speakers and deputy speakers for the state assemblies. All these developments show a sign of stability. If the ruling alliance failed to manage the disputes with the main opposition, another phase of political confrontations is likely to start.