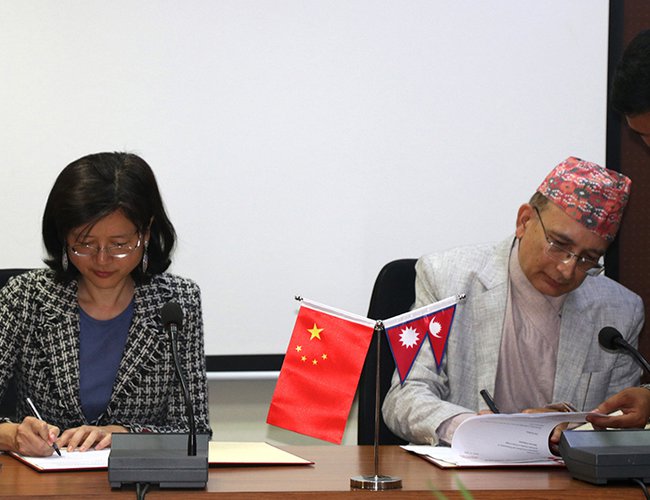 China has agreed to extend support to Nepal to bring back into operation the Tatopani border point, which remains closed after the devastating earthquake of April, 2015.

Chinese Ambassador to Nepal, Yu Hong and Finance Secretary Shanker Prasad Adhikari signed and exchanged an agreement on China-aid Post Disaster Recovery for Tatopani Frontier Inspection Station on behalf of their respective governments amidst a function held on Thursday.

The Tatopani Frontier Inspection Station is located in the Sindhupalchowk district that borders with Tibet Autonomous Region (TAR) of China. Its construction was started through Chinese assistance in December, 2012.

However, the construction was halted several times due to frequent disasters such as torrential rains on July 19 and landslide on August 2 of 2014, 8.1 magnitude earthquake on April 25 of 2015, and continuous rainstorm and road cutoff in June, 2016.

According to My Republica, besides supporting the construction of the Tatopani Frontier Inspection Station, China also agreed to provide support to Sindhupalchok Hospital Recovery Project and Jiri Higher Secondary School Project in Dolakha district. China will be providing 48 billion Yuan to execute these projects.

Officials said the latest Chinese support is part of the pledge it had made at the Donors' Conference held in the aftermath of the major earthquake in 2015. The Post Disaster Recovery for Tatopani Frontier Inspection Station project mainly includes prevention of natural disasters around the inspection station and completion of the remaining construction.

Addressing the function, Chinese envoy Yu said the Chinese government has been making positive efforts to reopen the Tatopani transit point. "Unfortunately, given the frequent occurrence of geographical disasters, facilities and roads surrounding Zhangmu port are further deteriorated. But the Chinese government will carry out positive work of disaster treatment and road repair on the Chinese side of the port," she said.

As per the agreement reached on Thursday, Chinese teams will start the construction soon, and finish the remaining construction of Tatopani Frontier Inspection Station as quickly as possible in order to create conditions to resume the operation of the Zhangmu port, according to a press statement issued by the Embassy of China in Kathmandu.