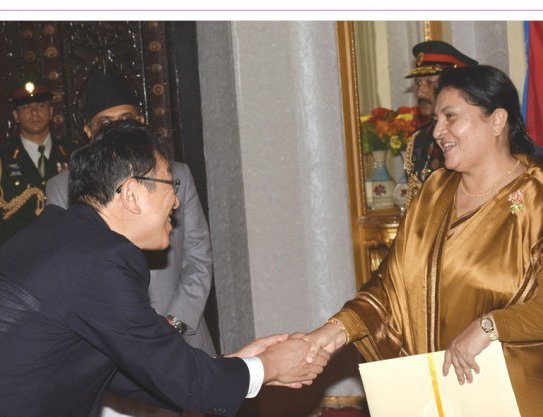 With enormous technical and financial support, Japan has been a partner in Nepal’s overall development and her efforts to transform it from subsistence to more modern commercial economy.

Along with infrastructure like roads and bridges, hospitals, hydropower projects, transmission lines, civil aviation and drinking water, Japan’s support to the construction of disaster resilient infrastructure, following the earthquake of 2015, is major milestone. Japan has been supporting Nepal in environment management and agriculture sector as well.

In the entire process of Nepal’s development programs, the diplomat, who heads Japanese Mission in Panipokhari, plays a very crucial role. After the retirement of seasoned diplomat Masashi Ogawa, new ambassador Masamichi Saigo has already started his function officially.

Although ambassador Masamichi has agriculture background, he also severed a long time in different Japanese diplomatic missions of Japan, including in India.

Masamichi joined Japanese diplomatic mission in 1988 as second secretary in Embassy of Japan in India and later he also served as first secretary in the embassy in 1990.

Bachelor of Science from University of Tsukuba, ambassador Saigo jointed the Ministry of Agriculture, Forestry and Fisheries in 1980. Sixty-two years old, ambassador Masamichi also worked for Environment Agency in Japan.

As Japan has been providing support to modernization of Nepal’s agriculture, horticulture, forestry and fisheries sector, the ambassador’s tenure in Nepal is likely to be more meaningful.

With the competent and professional diplomatic hands in Japan’s Mission in Kathmandu, Nepal-Japan relations will continue to strengthen and flourish during the tenure of ambassador Saigo.

MELAMCHI COMPLETION Japan’s Pleasure By A Correspondent 1 day, 10 hours ago