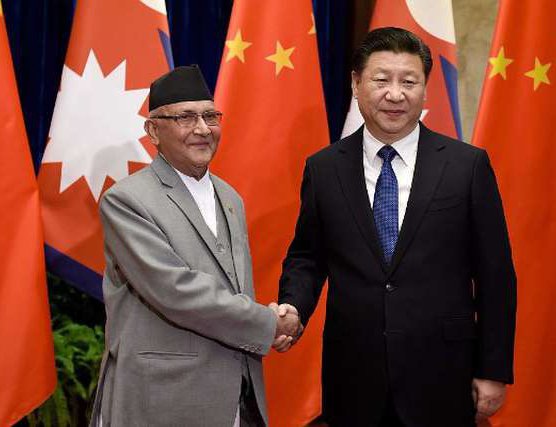 Although Nepal has taken several decisions, including scrapping of Budhi Gandaki agreement, sending unpredictable message about its reliability, Chinese mandarins have tactfully handled the visit of Prime Minister KP Sharma Oli with an understanding of his difficulties and limitations in dealing with China.

From the first day, till the end of Prime Minister Oli’s visit, the Chinese have conveyed a message that connectivity in Trans-Himalayan region is crucial for Nepal. In the 14-point joint statement issued by Nepal and China, most of the points are related to connectivity and investment.

"China and Nepal are friendly neighbors sharing weal and woe," Xi said. "Since the establishment of diplomatic ties between China and Nepal, the two countries have always carried out mutually beneficial cooperation on the basis of the 'Five Principles of Peaceful Coexistence.'"

Xi said China appreciates Nepal's firm adherence to the one-China policy and will, as always, support Nepal's efforts to safeguard national independence, sovereignty and territorial integrity and support Nepal's independent choice of social system and development path suited to its national conditions. He expressed hope that Nepal would achieve its development goals at an early date.

China-Nepal relations are facing new opportunities for development, said the president, noting that the two sides should maintain close high-level exchanges, strengthen strategic communications, continue to adhere to the Five Principles of Peaceful Coexistence, respect and accommodate each other's core interests and concerns, and consolidate the political foundation of their relations. China is willing to work with Nepal to build an all-round and mutually beneficial pattern for cooperation, Xi said.

He said the two sides should strengthen cultural exchanges and create new highlights in Sino-Nepalese humanities cooperation to build a solid foundation for bilateral friendship. He also called for strengthened cooperation on law enforcement capacity-building, so that the two countries could jointly fight against transnational crimes and safeguard their common security.

"China and Nepal should strengthen communication and coordination on major international issues," Xi said. During their meeting, Xi and Oli discussed ways and means to further expand the bilateral cooperation in various fields, including through cross border railway connectivity.

Oli said Nepal and China enjoyed a time-honored friendship and their relationship served as a model for relations between countries with different systems and sizes.

Before the meeting with President Xi, private sectors from Nepal and China signed eight agreements worth $2.4 billion. The agreements, signed in a ceremony at the Nepal Embassy in Oli's presence, were reached between the two governments and private sectors where Chinese investors will put money on developing hydroelectricity, water resources, cement factories and fruit cultivation and farming.

A pact for co-operation between Nepal Electricity Authority and State Grid Corp of China for a feasibility study of Nepal-China Cross-border Power Grid Interconnection Project was also signed. According to it, the two sides will carry out the feasibility study of 400 kV Kerung-Rasuwagadhi-Galchhi-Ratmate transmission line.

The Nepali Prime Minister also inaugurated the 2018 Nepal-China Business Forum' jointly organized by the Embassy of Nepal and China Council for the Promotion of International Trade. Inaugurating the forum, Oli said Nepal had embarked on a path of peace and political stability following the elections under federal set-up last year and expressed his confidence that Chinese entrepreneurs would invest in his country.

Prime Minister Oli held delegation-level talks with Chinese primer Li Keqiang, at the Great Hall of the People. The two sides reviewed the entire gamut of bilateral relations during the talks. Both sides agreed to enhance bilateral co-operation in connectivity, trade, tourism and investment, including through the implementation of the MoU on Co-operation under the Belt and Road Initiative, among others.

Expressing happiness over the signing of the MoU on Co-operation for Railway Connectivity, both sides agreed to intensify co-operation on cross-border railway connectivity.

The two sides agreed to implement the agreements and understandings reached in the past, including the early finalization of the Protocol to the Agreement on Transit Transport.

A seasoned diplomat, secretary Bairagi and his team and experienced China hand ambassador Paudyal played all the official roles to make the visit of Prime Minister Oli a success.

Following the bilateral talks, Nepal and China signed a total of 14 bilateral agreements/MoUs/LoEs, including MOU on Energy Co-operation; MOU on Investment and Co-operation on Production Capacity; MOU on Strengthening Co-operation between the two Foreign Ministries; MOU on the Establishment of Mechanism for Facilitation on the Implementation of Nepal-China Co-operation Programs and Projects in Nepal between the two Foreign Ministries; Agreement on Economic and Technical Co-operation; Agreements on the Reconstruction of Friendship Bridge and Rasuwa Bridge; Protocol on the Utilization of Highways in Tibet Autonomous Region, China by Nepal for Cargo Transport; and MOU on Human Resource Development Co-operation.

According to a press release issued by Ministry of Foreign Affairs, prior to the talks, the Prime Minister was accorded a ceremonial welcome amid a special ceremony held at the Great Hall of the People. In the evening, Premier Li hosted a welcome banquet in honor of the Prime Minister and his delegation.

As Prime Minister K.P. Sharma Oli’s delegation signed a number of agreements, including some agreements to build hydropower projects in Nepal, mostly in province 4, Chief Minister of Province 4 Prithvi Subba Gurung, who is reportedly close to Prime Minister Oli, publicly declared that his province does not require foreign investment in hydropower.

Whether the statement is a tongue slip or his own policy, the statement delivered by chief minister Gurung just a day after the signing of the several agreements gave an uncertain message, undermining prime minister’s credibility.

Although it is yet to see how Prime Minister Oli will see chief minister Gurung’s statement, the statement is likely to erode the credibility of Nepal’s prime minister.

Tactfully drafted, the 14-point joint statement, among others, just elaborates areas of Nepal and China economic development. As a growing economic and world power, Chinese leaders maintain all constraints and sensibility towards a small neighbor.

US And Nepal Work Together All The Time: US Secretary Of State By NEW SPOTLIGHT ONLINE 1 day, 22 hours ago

Discussion At Political Level Continues To Push Ahead With MCC: PM Deuba By Agencies 1 week, 3 days ago