Hunger kills more people every year than malaria, tuberculosis and AIDS combined in the world 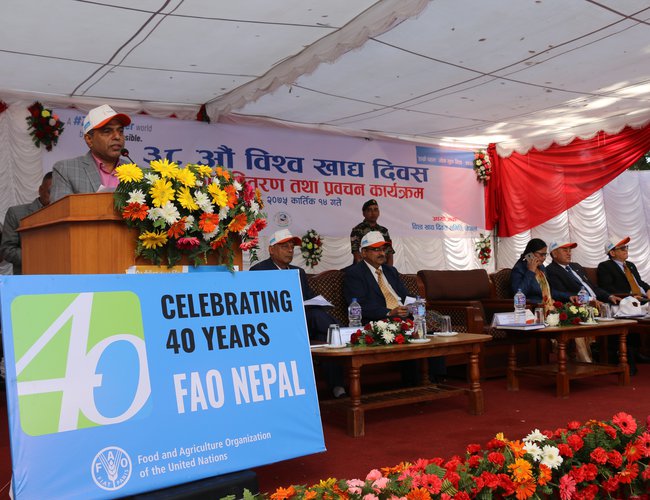 The 38th World Food Day (WFD) was observed in Nepal focusing on the theme “Our actions are our future: A # ZeroHunger world by 2030 is possible”.

Speaking on the occasion, Minister Khanal stressed on the need to adopt scientific distribution system of agriproducts. Highlighting the contribution of Food and Agriculture Organization (FAO) of the United Nations in the multi-sectoral development of Nepal, Minister Khanal congratulated FAO for completing 40 years of its country office in Nepal.

Minister of State Chaudhari highlighted the government commitment to address the problems of the smallholders. She advised the farmers and entrepreneurs to produce more by adopting mechanization in order to produce enough food not only to feed the people of Nepal but also to export in other countries.

Dr Yubak Dhoj GC, the Secretary of the Ministry of Agriculture and Livestock Development (MoALD) said that the Nepal has started responding to the goal of achieving the zero hunger status in the state level by passing the bill on the Right to Food as the fundamental rights.

Delivering the key note address, Dr Somsak Pipoppinyo, the Representative of Food and Agriculture Organization of the United Nations in Nepal, said that the World Food Day theme, “Our actions are our future: A Zero Hunger world by 2030 is possible” has drawn attention of the leaders, policy makers and all the stakeholders on the need of redoubling the efforts to end the hunger.

Stating that the conflict, extreme weather linked to climate change, and economic slowdown, are putting this objective at risk, Dr Pipoppinyo said, “It is sad to say that hunger kills more people every year than malaria, tuberculosis and AIDS combined in the world. About 80% of the world’s extreme poor live in rural areas. Most of them depend on agriculture. FAO estimates that agricultural production must rise by about 60% by 2050 in order to feed a larger and generally richer population.”

Referring to the message of the Director-General of FAO, Dr Jose Graziano da Silva, Dr Pipoppinyo said that Zero Hunger is achievable with the combined efforts of all stakeholder in the remaining years for 2030.”

The ceremonial function of the observance of the World Food Day -2018 was presided over by Mr Surya Prasad Poudel, the Director –General of the Department of Agriculture of the MoALD.