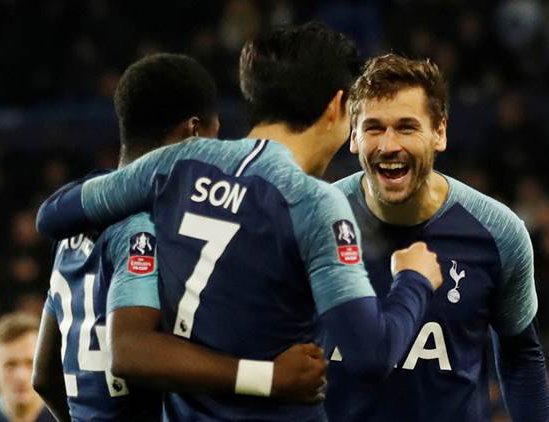 Tottenham recorded the biggest away win in club history on Friday as Fernando Llorente scored a hat trick to help crush fourth-tier Tranmere 7-0 in the third round of the FA Cup.

Tranmere held out until right back Serge Aurier got Tottenham rolling with a shot from 25 meters (27 yards) five minutes before halftime.

Aurier, returning from a groin issue that had sidelined him for eight matches, powerfully struck a swerving shot into the corner of the net for his first of two goals.

Son Heung-min led Tottenham’s attack throughout the match and set up Llorente and Aurier early in the second half before making it 4-0 with a goal of his own in the 57th.

Llorente then added back-to-back goals in the 71st and 72nd and late substitute Harry Kane showed no mercy by capping the demolition.

It was Kane’s 159th goal for Tottenham, tying him with Cliff Jones for fourth on the club’s career scoring list.

Llorente was making his second start of the season. It was his second hat trick for Tottenham after also scoring three times against Rochdale last season in a FA Cup fifth-round replay.

“I am so, so pleased because the team is performing very well away from home, they’re showing great character,” said coach Mauricio Pochettino, whose team is third in the Premier League.

Pochettino made eight changes to his starting lineup from Tuesday’s win over Cardiff City.

“I’m happy today because we keep (up) the level and we keep going in that competition which is important for the club,” Pochettino said. “It’s so important to manage the squad to try and give some rest to the players when they need (it).”

Pochettino gave debuts in the second half to George March and TJ Eyoma.

Besides the biggest road victory for the club founded in 1882, it was also its largest margin of victory since beating Wigan Athletic 9-1 in 2009.