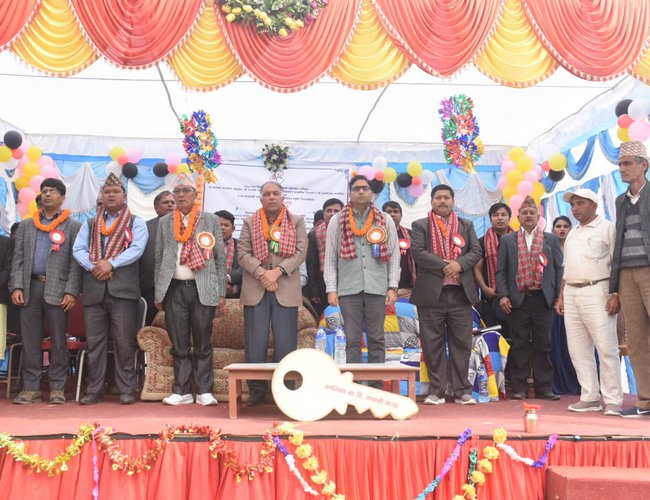 The four schools were reconstructed at a cost of NRs. 167 million according to earthquake-resilient reconstruction norms of Government of Nepal. The newly handed over schools include classroom blocks, administrative blocks, practical blocks, separate sanitation facilities for girls and boys.The four new schools will provide better learning environment to over 1800 students studying in them. The schools are part of 71 educational institutes across eight districts being built under Government of India grant assistance of US $ 50 million for reconstruction in the education sector.

Speaking on the occasion, Head of Wing, Press Information and Culture emphasized that education is the best investment in the future of the country and its people. Since 2003, Government of India has built hundreds of educational campuses, complementing the efforts of Government of Nepal in this area. ShreeNaveen Kumar encouraged Nepali students to take advantage of over 3000 scholarships being provided by Government of India to contribute in the development of their country and to become the best ambassadors of each other country to further strengthen India-Nepal partnership.

India has also committed reconstruction grant of US $ 200 million (for reconstruction projects in Housing, Health and Cultural Heritage Sectors. Presently, nearly 47,000 houses, under owner driven model, have already been completed in Gorkha and Nuwakot districts and work the remaining houses is underway. NRA and the respective Municipal authorities have requested the beneficiaries complete the reconstruction before the Monsoon rains.

Total 147 health buildings and restoration/retrofitting of 28 cultural heritage sites in total 11 districts of Nepal affected by earthquake of 2015 under Indian reconstruction grant. Both NRA of Nepal and the Embassy have been working closely to complete the reconstruction projects at the earliest.