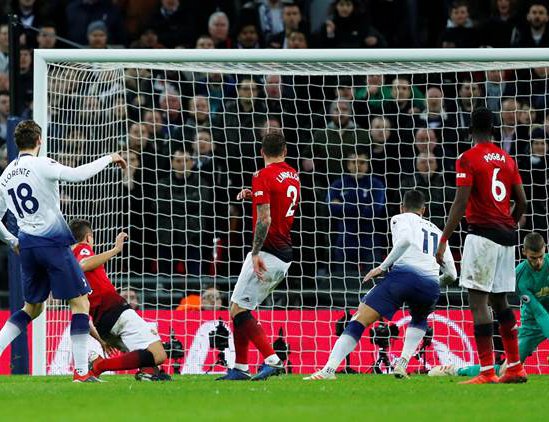 By passing his first significant test since replacing Jose Mourinho, Ole Gunnar Solskjaer became the first United manager to open with six straight wins _ strengthening his bid to keep the manager’s job into next season.

The only goal came in the 44th minute at Wembley Stadium after Tottenham defender Kieran Trippier gave the ball away. Paul Pogba sent a long, high diagonal pass to Rashford who controlled the ball with one touch and then sent it low beyond goalkeeper Hugo Lloris.

The second half was all about Lloris’ United counterpart, with De Gea using his feet and hands to repeatedly thwart Tottenham players _ particularly Kane and Dele Alli.

Solskjaer got the better of Tottenham manager Mauricio Pochettino, who was considered the favorite to be hired as Mourinho’s permanent successor.

Although still third in the standings, Tottenham has now lost back-to-back league home games and top-scorer Harry Kane limped off at the end.

United is yet to rise from sixth under Solskjaer but the record 20-time English champion is now only behind Arsenal on goal difference and six points adrift of Chelsea in the fourth and final Champions League place.

Kurt Zouma scored his first Everton goal in a 2-0 victory over Bournemouth on Sunday, giving the Merseyside club only its second win in nine Premier League matches.

Zouma, who is spending the season on loan at Goodison Park from Chelsea, headed in from Lucas Digne’s cross in the 61st minute.

Substitute Dominic Calvert-Lewin was set up by Ademola Lookman to complete the win in the fifth minute of stoppage time.

It came at the end of a week when Everton majority shareholder Farhad Moshiri, while backing manager Marco Silva, told the annual general meeting that the season so far was “not good enough.”

Everton is now up to 10th in the standings, three points ahead of Bournemouth, which has lost nine of its last 12 league games.